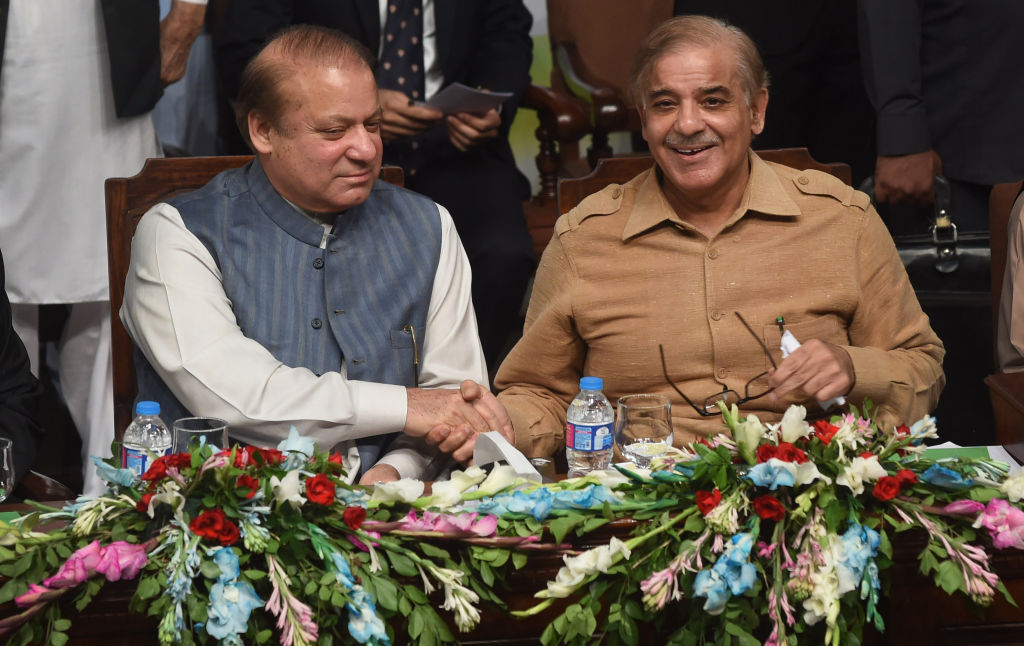 Sacked Pakistani prime minister Nawaz Sharif (L) shakes hands with his brother and Chief Minister of Punjab province Shahbaz Sharif during the PML-N Workers convention in Lahore on October 4, 2017. The Supreme Court deposed Sharif in July following an investigation into corruption allegations against him and his family making him the 15th prime minister in Pakistan’s 70-year history to be ousted before completing a full term. / AFP PHOTO / ARIF ALI (Photo credit should read ARIF ALI/AFP via Getty Images)

After concluding his trip to Egypt for the COP27 climate conference, Pakistan Prime Minister Shehbaz Sharif is headed to London to meet PML-N supremo, and elder brother Nawaz Sharif.

This visit to London is the third such trip since he became Prime Minister in April. The Dawn newspaper reported that this visit comes two weeks before the end of Pakistan Army chief Qamar Javed Bajwa’s tenure on November 29. Citing earlier reports, the Pakistan daily said that Shehbaz would consult Nawaz on the appointment of the Pakistan army chief.

Pakistan’s Information and Broadcasting Minister Marriyum Aurangzeb announced Shehbaz Sharif’s visit but did not divulge information about the London trip.

The political slugfest which started with Imran Khan’s ouster from power in April by a vote of no confidence has in successive months worsened now after the assassination bid this month.

Aside from the call for early elections, another bone of contention between the coalition government and Imran Khan’s Pakistan Tehreek-e-Insaf (PTI) is said to be the appointment of the new Army chief.

“Whether anyone agrees or not, the current political standoff is all about the appointment of the next Army Chief. It started when PTI chairman Imran Khan was still in office,” senior Pakistan journalist Hamid Mir wrote in a piece for The Friday Times.
“The PTI chairman had granted a three-year extension in term to Chief of the Army Staff (COAS) General Qamar Javed Bajwa, but once he developed differences with him over the transfer of Inter-Services Intelligence (ISI) Director-General, he decided to dismiss him early and appoint a loyalist for the job,” he added.

Of the ten army chiefs Pakistan has had since 1972, half of them were appointed by the former Pakistan Prime Minister Nawaz Sharif, according to Dawn.

He was repeatedly criticised for appointing officers he saw as an ‘apna banda’ (his man). However, none of the appointments worked in his favour.