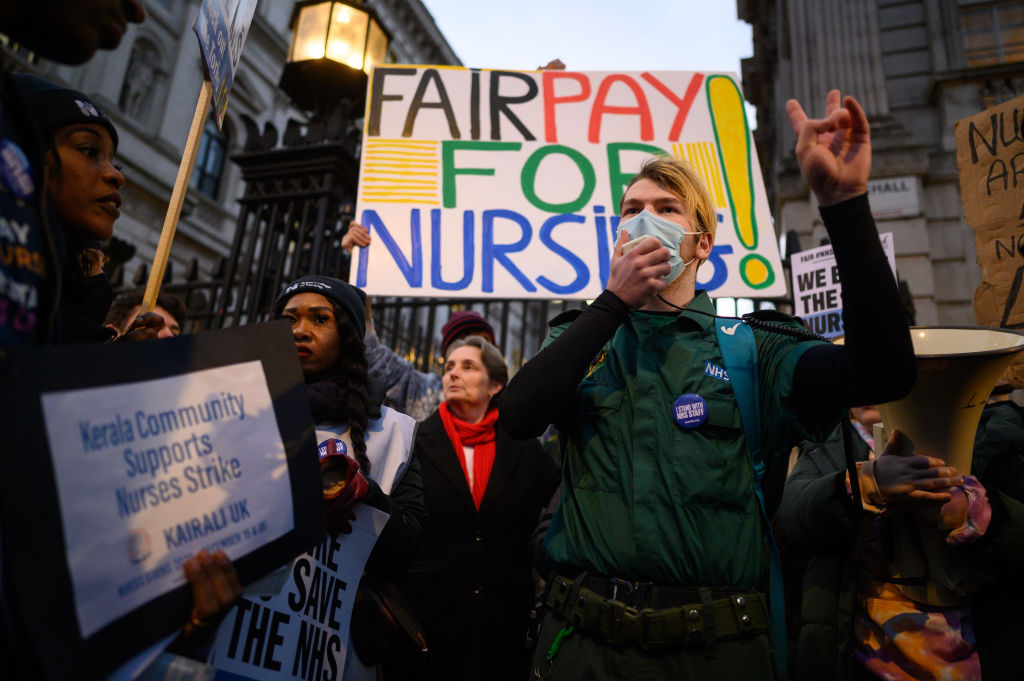 LONDON, UNITED KINGDOM – DECEMBER 20: An ambulance paramedic makes a speech as NHS workers and supporters gather outside Downing Street to protest during the second day of strike action by NHS nurses, on December 20, 2022 in London, United Kingdom. For the first time in its history, the Royal College of Nursing has called its members out on strike, in England, Wales and Northern Ireland, over pay and conditions. (Photo by Leon Neal/Getty Images)

The walkout comes after nurses held their union’s first stoppage in more than a century last month, joining a wave of industrial action by UK public sector workers hit by a cost-of-living crisis driven by spiralling prices.

The main nursing union accuses the government of failing to negotiate seriously on improving their pay deal for the current year, which they say is crucial given the economic situation.

“We take strike action with a heavy heavy heart but a clear mind about what we want to achieve,” said nurse Anna Swift before joining a picket line in central London.

The latest walkout piles further pressure on the National Health Service (NHS) at a time of peak demand due to winter illnesses and lengthening waiting lists for treatment caused by Covid cancellations and under-staffing.

Further strikes are planned for February 6 and 7 by the Royal College of Nursing (RCN) union, which has said they will “be at the highest intensity” in its history.

He has hinted at the possibility of more flexibility in agreeing upcoming salary deals, handled by pay review bodies whose independence from government has been questioned.

“Unaffordable pay hikes will mean cutting patient care and stoking the inflation that would make us all poorer,” health minister Steve Barclay wrote in an op-ed Wednesday in The Independent.

He added that salary increases would “take billions of pounds away from where we need it most”.

Barclay said two days of strikes by nurses in England and Wales in December led to the cancellation of some 30,000 elective procedures and outpatient appointments.

But Pat Cullen, head of the RCN, said nurses are “the voice of the patient” and has repeatedly urged the government to negotiate over pay to retain beleaguered staff and attract new recruits.

“Let’s all get into a room and sit down and have real conversations about how we’re going to address the crisis within the health service,” she told ITV.

Despite the disruption to the NHS, the nurses’ plight has prompted public sympathy. A YouGov poll published on Tuesday suggested 63 percent supported their strike.

“Our message to the government is to give the NHS a fighting chance and do all you can to bring an end to this damaging dispute,” Taylor said.

This week’s walkout could cause 4,500 cancelled operations and 25,000 cancelled outpatient appointments, the NHS Confederation estimated.

The GMB union representing ambulance workers is also expected to announce Wednesday that it will resume strike action.

Ambulance drivers and paramedics this month held their second walkout in two months over pay and conditions.

The GMB tweeted Tuesday that “government silence on pay gives… no option but to strike”.

Meanwhile MPs on Monday gave initial backing to controversial legislation introduced by Sunak that would require some frontline workers to maintain a minimum level of service during strikes.