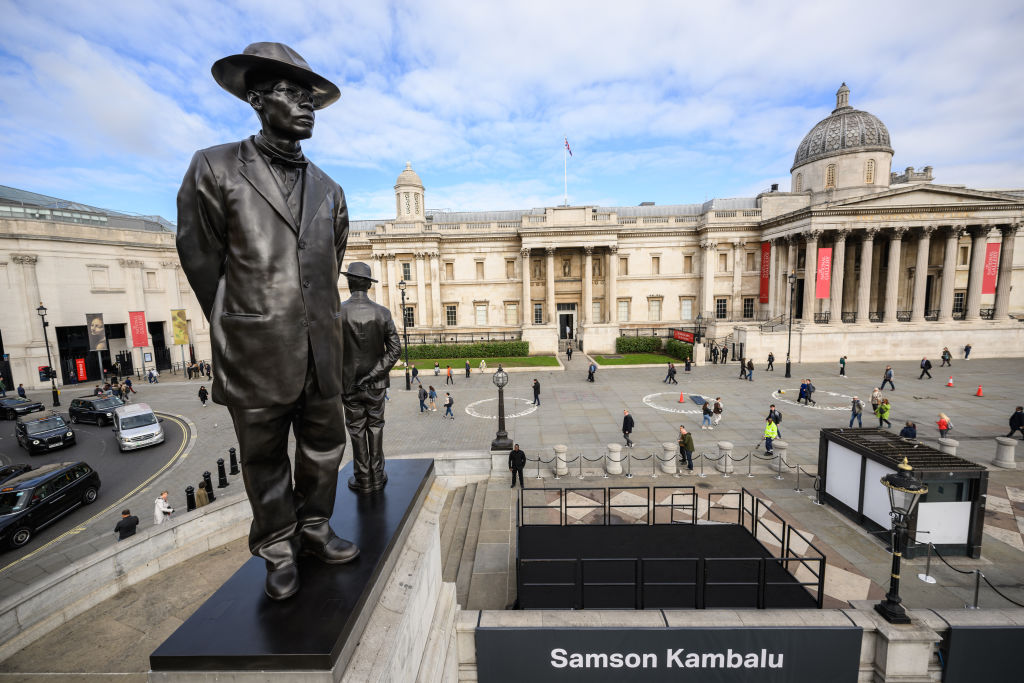 LONDON, ENGLAND – SEPTEMBER 28: The latest artwork to be displayed on the fourth plinth; “Antelope” by Samson Kambalu, is seen at Trafalgar Square on September 28, 2022 in London, England. The sculpture recreates a 1914 photograph of Malawian Baptist Preacher and Pan-Africanist John Chilembwe and European Missionary John Chorley. In the image, Chilembwe keeps his hat on, in defiance of the colonial rule that forbade Africans from wearing hats when in the company of white people. In the sculpture, Chorley remains life-sized while Chilembwe is much larger, elevating the man and his story. The fourth plinth in the northwest corner of London’s Trafalgar Square is a platform for changing art installations. Originally erected to hold an equestrian statue of William IV in 1841, the project was abandoned due to a lack of funds. Since 1998 the plinth has been used to exhibit a dozen artworks. (Photo by Leon Neal/Getty Images)

London Mayor Sadiq Khan’s office has said no statue of Queen Elizabeth II will be erected on the Fourth Plinth of Trafalgar Square in the foreseeable future.

A statue of Malawi’s resistance icon John Chilembwe has been unveiled on the platform, although there were calls for installing a monument in memory of Britain’s longest reigning monarch.

The Fourth Plinth where a statue of William IV was originally intended to come up had remained empty from the mid-19th century. Since 1999, temporary artworks have been erected on the platform, each standing there for two years.

Khan’s office made it clear that the place would continue to showcase “new works by world-class artists for the foreseeable future.” This effectively ruled out a statue of the Queen at the place.

The mayor’s spokesperson said exhibits had already been planned for Fourth Plinth for the next four years. Chilembwe’s statue would remain there till 2024.

Khan, however, supported the idea of installing the Queen’s statue at some other place in London.

“A statue of the Queen at a suitable location in London is a matter for the Royal Family to consider,” the mayor’s spokesperson told the Telegraph, adding, “the Greater London Authority stands ready to support them in their wishes.”

Exhibits at the Fourth Plinth are chosen by a commission appointed by the mayor.

Chilembwe’s statue, an artwork by Samson Kambalu, is entitled Antelope. It’s a recreation of the iconic image of the Malawi pastor wearing a hat, defying the colonial rule that barred Africans from wearing hats in the presence of white people.

In the original 1914 photo, Chilembwe is seen next to missionary John Chorley – both wearing hats. It is also the last known photograph of Chilembwe who died in 1915 after organising an unsuccessful uprising against British colonial rule.

Artist Kambalu, an associate professor of fine art at the University of Oxford, said Chilembwe represented the fight for a “better world”.