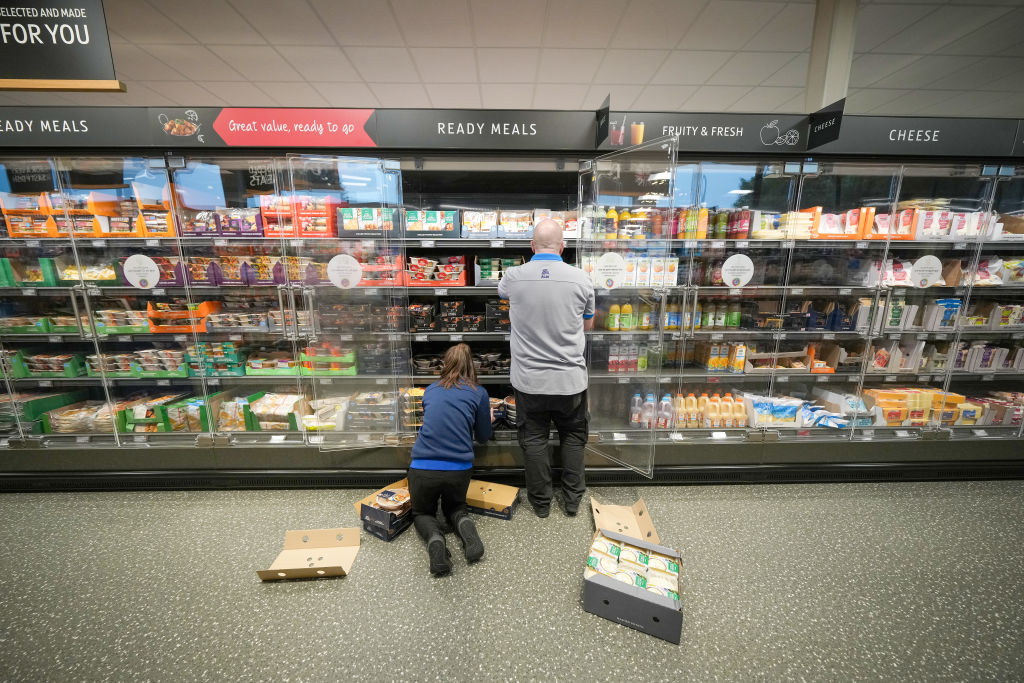 TARLETON, UNITED KINGDOM – JULY 22: Colleagues at the new Tarleton Aldi store restock the shelves on July 22, 2022 in Tarleton, United Kingdom. Aldi is the UK’s fifth largest supermarket chain and has 950 stores. The new Aldi store is the first in the Preston area. (Photo by Christopher Furlong/Getty Images)

SALES volumes at UK supermarkets fell 4.1% year-on-year in the four weeks to July 16, with nine out of ten Britons saying they are increasingly watching what they are spending as they battle a cost of living crunch, industry data showed on Tuesday.

Market researcher NielsenIQ highlighted a 9.4% dip in sales volumes of meat, fish and poultry, an 8.1% fall in household items and a 6.4% decline in packaged groceries, as households sought to manage their shopping budget amid soaring inflation.

Confidence levels among Britain’s consumers are at record lows as wages are failing to keep pace with inflation that hit a 40-year high of 9.4% in June and is heading for double digits.

NielsenIQ said spend per visit, across all channels, was down 5% as shoppers continued to make trade-offs, such as opting to buy smaller packs, delaying purchases or changing the products they buy.

It said 49% of UK consumers are feeling less secure about meeting day to day expenses within the next six months.

“Moreover, a staggering 90% are increasingly watching what they are spending, with 62% saying that food and grocery costs are one of the highest causes of financial concern, second only to the cost of utility bills.”

One fifth of British households had “negative disposable income” last month, with a shortfall between what they earned and what they needed to spend on essentials, supermarket group Asda said on Monday. Read full story

NielsenIQ said total sales on a value basis rose 4.4% year-on-year over the four week period, reflecting inflation and the start of a heatwave, which boosted demand for water, ice cream and suncare products. Total sales were up 5.6% in the final week of the period.

Store visits were up 10% year-on-year. The slowdown in online grocery continued with sales falling 10.5% year-on-year, but online’s share of the total UK grocery market was stable at 11.5%.