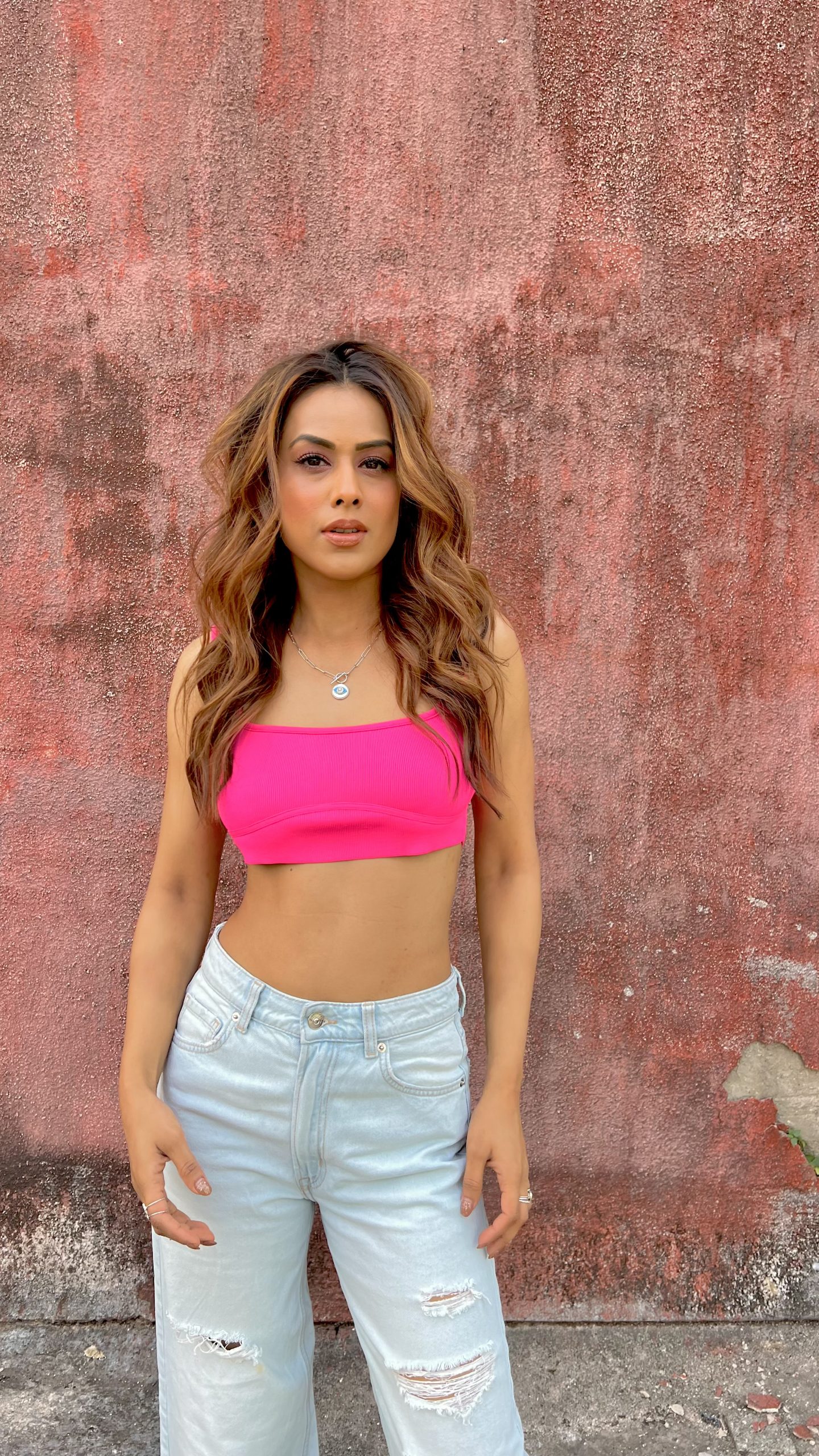 One of this year’s great television highlights was the powerful presence of Nia Sharma in popular reality TV show Jhalak Dikhhla Jaa 10.

The actress, affectionately nicknamed ‘the lioness’, was a roaring success with fierce dances, cool costumes, and fearless aerial stunts. Although she didn’t win the trophy, the beautiful star left a lasting impression and showed off her impressive range as a performer, along with winning admiration for her brave approach.

She is now looking forward to taking on more challenges and refuses to slip into any kind of comfort zone.
Eastern Eye caught up with the popular actress to discuss her stunning Jhalak Dikhhla Jaa 10 journey, hopes, inspirations, fan base and secret to being a lioness.

What made you want to participate in the show Jhalak Dikhhla Jaa?
Doing Jhalak was always my priority, but the show had disappeared for five years, so never came my way. The very first opportunity I got this year, when it came back, and they called me, I was game for it. I was the happiest to be doing the show.

How do you look back on your journey in the show?
I look back at it as my proudest moment, and happiest place, where I cried the most, and laughed like a maniac. It’s something I never imagined. I thought I would only dance on the show, but it exceeded my expectations. I did acts like the aerial stuff, which I have only seen on places like Instagram. I’ve done the toughest things in life, and it made me stronger. I have a super-hard core strength now. A lot of things I didn’t imagine came my way and turned it into an unexpectedly beautiful journey, with ups and downs.

Is there one highlight that will remain with you?
I will say the family episode when my mum and my brother came to stand by me. I could tell our actual story to the world and how it was received with pure intentions, and everybody cried. That day and how it touched everyone’s heart will remain the biggest highlight, because I felt happy sharing my story with the world. I think that day’s act also went super cool, so it was brilliant.

What made you want to attempt so many dangerous moves and stunts?
(Laughs) Those things came my way because I had a daredevil choreographer like Tarun. Secondly, it was always a part of my dreams. I never thought I would ever be able to achieve such things because they were super tough, but somehow, he never took no for an answer. Those aerial things were created for us and enabled us to give larger than life acts on the show. I was super proud despite the backaches, my spine breaking, or my thighs going for a toss. I felt my soul leaving my body during learning all those things, but it was so amazing.

You were like a daredevil…
Deep down I am this girl who wants to achieve everything in life, and take on the toughest things, so felt great. I’m super glad they all came my way, and I attempted the most daredevil things on the show. That is why our act stood out. I’m proud of my own journey. It was like a dream life.

You came across as fearless. Was that the case during those fierce performances?
I have a lot of fear, but fearlessly do things because I put all my life into learning them. But
after three to four days of hard work, I started achieving things, became super proud and happy. When I achieve them like a queen, I look fearless. Before that in rehearsals, I have cried the most and screamed. They don’t show all that in the behind-the-scenes footage. (Laughs) But yeah, you can say I am fearless!

How did you cope with the demanding schedule and physical challenges?
Physically, it was very challenging, but this is what I had signed up for. I had put every other thing on a back burner, honestly, and stopped taking calls for other work. I had stopped meeting friends and invested all my energy into this one journey of Jhalak. I would sleep it out when there was too much pain in the body, so resting was important. I would sleep well and then go back to the rehearsal all charged to give it my all again, the next day.

How emotionally challenging was the journey?
I was on an extreme high of emotions in the show – laughing the most because you’re having so much fun. It was my happiest place being on camera and getting praise from the judges. There were also the toughest moments, where you are not able to achieve the dance moves and a lot of lifts. When I failed at something, I would start crying – that is when my team and Tarun would sit me down and pacify me.

You did show a lot of emotions…
It was a rollercoaster ride. Either we were laughing a lot, or I was crying the most. I felt so attached to this place because of the emotions. (Laughs) I just realised I’m too high on emotions, which I need to control. I cry at the drop of a hat. I realised this during the show that I’m very emotional, and it’s not good for me or healthy in the long term.

Is dance something you will continue with?
Dance is something that you can’t fully master on a three-month Jhalak journey, as it is so vast. So, I want to keep learning it for the rest of my life, until my last breath. I would like to
continue picking up projects that involve dance. It’s tough and doesn’t come naturally to me, but I would love to do dance music videos and keep making my mark like that.

What was the thought process behind the stunning costumes?
Costume making in this show is the toughest process. Our designer Ken has been doing this for 14 years, so knows what looks stunning on stage, but it came with restrictions. Anything can malfunction while dancing, so he had to make the costumes safe, elegant, and very stunning. He did a lot of hard work to make us look as good as possible, and we flaunted them with elan on our side.

What is the plan going forward?
There is honestly no plan. Like I said, I put a lot of stuff on the back burner because of Jhalak and now I am finally free. I don’t know what’s coming ahead for me, but I want to wait for super cool opportunities. I just want to keep making my mark and going forward.

Do you see yourself making the move to films?
Making a move to films is something that everybody is looking to do, I feel. Do I think about it? Yes. Do I know the harsh reality of our industry? Yes. I also know how tough it is for somebody from a television background to break that image and get into other things. So, I’m definitely trying to groom myself to the level where people would see me as Nia Sharma and not somebody from a TV background or anything like that. I don’t want to be attached to a particular medium. I want to open myself to different opportunities, whether it’s a web series or something else. I want to make a mark with a project and role people would
remember me by.

Will you make a new year’s resolution?
I’m not a girl who makes a lot of resolutions. But the new year is coming, so the only resolution I will make is to keep moving forward, keep working hard and grow bigger in life. Above all, to be happy in life.

How much do your fans mean to you?
My fans mean everything to me because wherever I am today, and whatever I have achieved, they have been the force behind me. They have pushed me forward and made me work hard. The love they shower and that lifelong connection they have, for as long as you are in the industry, are amazing. That love cannot be reciprocated. There is no way I can pay it back. So, I feel very indebted to them. I am proud of them. It feels very overwhelming to know they are there with you.

What inspires you today?
People’s hard work inspires me. People who make a lot of effort to grow in life, remain happy and be positive in life inspire me. Everyone’s working, stressed and wants to make it big, but nobody remembers to smile or take a break. People are just ready to slit each other’s throat to move forward, and I don’t want that. What inspires me is people who work hard for themselves each day to keep going ahead.

What is the secret of being a lioness like Nia?
There’s no secret to being a lioness! It’s just that I want to grab every opportunity with both my hands. I give my all and soul to that thing and come out like a pro. I want people to know me as somebody who gives it her all and in the process everybody ended up calling me a lioness, and I love this tag. I really want to live up to it. All I know is working hard. All I understand is making an effort. I will live up to that, and no matter what, I will
always be the lion people call me.