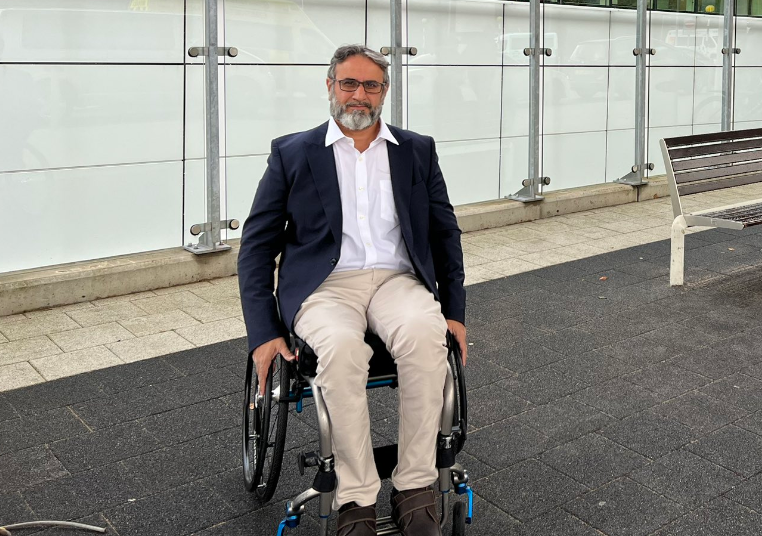 Some 21 months after becoming paralysed waist-down and having undergone multiple spinal operations, an NHS surgeon is creating history on Thursday.

Mohammed Belal is set to become the first doctor in the UK to conduct surgery after being paralysed.

The neuro-urology surgeon, who suffered spinal injuries when he was hit by a falling tree during the pandemic, returned to work at Queen Elizabeth Hospital in Birmingham earlier this week after eight months of treatment and 1000 days of rehabilitation.

He is provided with an electric wheelchair with a hydraulic seat which can be raised to support him in a standing position while conducting surgery. It can also be tilted to enable him to lean over the patient.

Belal, 48, had treated many people for spinal injuries but found himself in need of similar treatments after a freak accident in February last year.

Having volunteered to work at Covid wards, the father of three was riding a bike as a relief activity, when he was hit by a falling tree at Berkswell in the West Midlands.

“We were going pretty fast and suddenly I saw the tree coming down in front of me,” Belal told the Mirror, recalling the incident.

Caught by surprise, he knew there was no way he could avoid the mishap.

When he woke up and tried to move, he “couldn’t feel anything from the waist down,” he said, adding he “realised straight away that I was paralysed and visualised myself in a wheelchair.”

With his back broken and having also suffered injuries in his shoulder and ribs, he was taken to University Hospital in Coventry before being shifted to the Royal National Orthopaedic Hospital in London.

“I focused on the fact that I was a lucky guy, they would be able to fix my spine, and I would get through it,” he said.

He returned home in June this year.

“Back working as a surgeon in the NHS last week,” he tweeted last week with the message: “Never give up and keep smiling”.

He thanked his family, friends, colleagues and the professionals who looked after him, saying he would not have returned to work without their support.