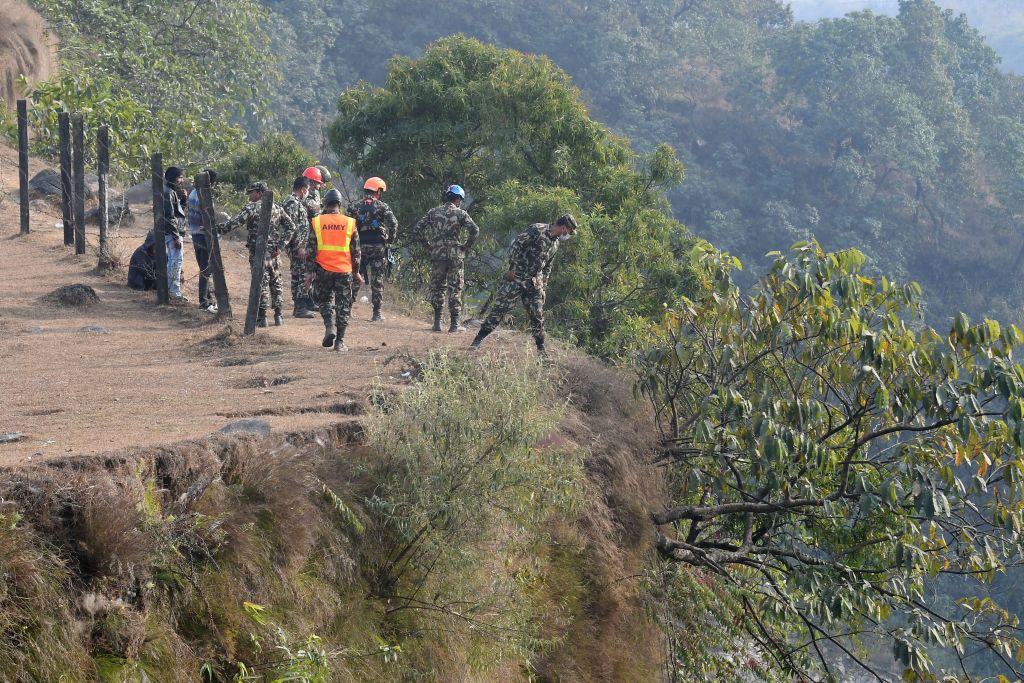 Rescue personnel search for victims at the site of the Yeti Airlines plane crash, in Pokhara on January 17, 2023. – The Yeti Airlines flight with 68 passengers and four crew plummeted into a steep gorge, smashed into pieces and burst into flames as it approached the central city of Pokhara on January 15, in Nepal’s worst aviation disaster since 1992. (Photo by PRAKASH MATHEMA / AFP) (Photo by PRAKASH MATHEMA/AFP via Getty Images)

The search for the last missing person in the Nepal plane crash resumed on Wednesday after rescuers on Tuesday pulled out one more body from the crash site where a Yeti Airlines aircraft carrying 72 people, including five Indians, had plunged in a river gorge in the resort city of Pokhara.

Two days after the fatal crash, a woman’s body was found deep down in the Seti River gorge on Tuesday. With this, the bodies of 71 people who died in the crash have been retrieved.

The Yeti Airlines aircraft took off from Kathmandu’s Tribhuvan International Airport at 10:33 am on Sunday and crashed on the bank of the Seti River between the old airport and the new airport in Pokhara, minutes before landing.

Fifty-three Nepalese passengers and 15 foreign nationals, including 5 Indians, and four crew members were on board the Yeti Airlines aircraft when it crashed.

The five Indians, all from Uttar Pradesh, have been identified as Abhisekh Kushwaha, 25, Bishal Sharma, 22, Anil Kumar Rajbhar, 27, Sonu Jaiswal, 35, and Sanjaya Jaiswal.

As many as 48 bodies of the deceased have been brought to Kathmandu, the report added.

The dead bodies except that of the locals and those who could not be identified and those of foreigners were flown to Kathmandu on Tuesday afternoon.

The bodies of the 48 victims have been brought to Kathmandu via Nepal Army helicopters for post-mortem at Maharajgunj-based Tribhuvan University Teaching Hospital.

Superintendent of Police Dinesh Mainali of Kathmandu Police Range said the bodies will be handed over to the respective families only after the completion of an autopsy.

Meanwhile, a team of experts from France arrived in Nepal on Tuesday to study the ATR plane crash of Yeti Airlines that took place in Pokhara on January 15.

A nine-member expert team from the company that manufactures the ATR aircraft has reached Pokhara.