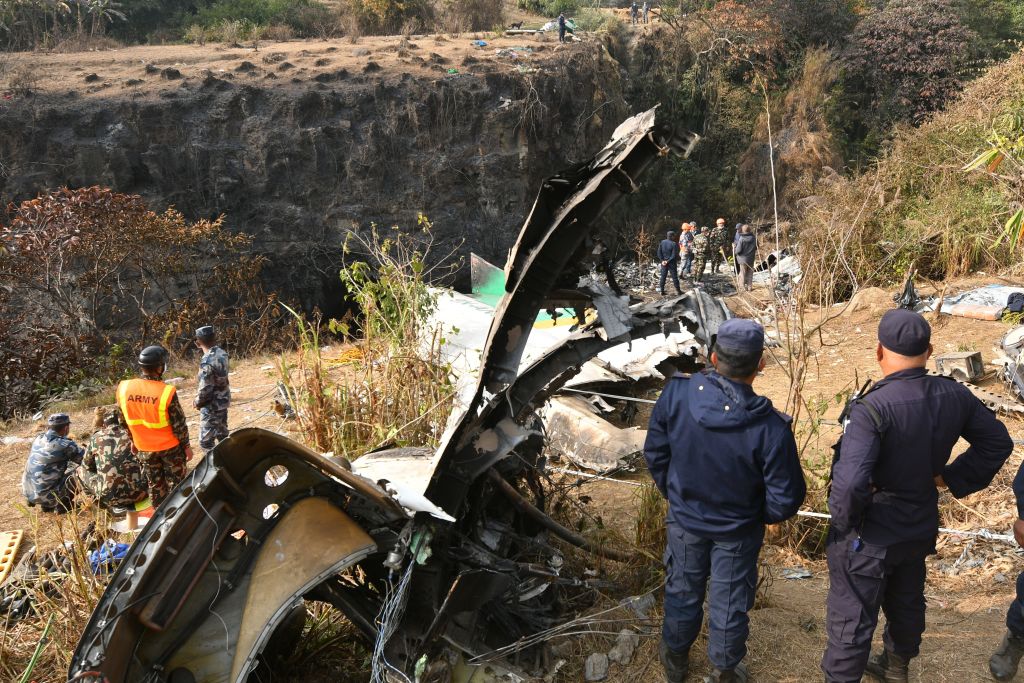 Nepalese authorities on Tuesday started handing over to family members the bodies of those killed, two days after Yeti Airlines’ aircraft with 72 people, including five Indians, crashed in the resort city of Pokhara, as the death toll rose to 71.

As two more bodies were recovered from the accident site on Tuesday, the total number of confirmed dead has climbed to 71, Nepal Army spokesperson Narayan Siwal said.

One person was still missing and the search operation is continuing to retrieve the last body, according to the Nepal Army sources.

The Yeti Airlines’ aircraft took off from Kathmandu’s Tribhuvan International Airport on Sunday morning and crashed on the bank of the Seti River between the old airport and the new airport in Pokhara, minutes before landing.

Fifty-three Nepalese passengers and 15 foreign nationals, including five Indians, and four crew members were on board the plane when it crashed.

Meanwhile, 48 bodies, including those belonging to crew members and foreign nationals, were brought to Kathmandu on Nepal Army helicopters on Tuesday.

The bodies were taken to the Tribhuvan University Teaching Hospital at Maharajgunj for postmortem, according to airline sources.

The relatives of the deceased people will receive the body once the post-mortems are complete.

The bodies will be handed over to either family members or the concerned diplomatic missions in case of foreign nationals.

The family members of four men from Ghazipur in Uttar Pradesh who were killed in a plane crash in Nepal have reached Kathmandu to receive the bodies.

The relatives of the deceased were waiting outside the hospital to receive the bodies. The relatives of Sanjaya Jaishwal, Shambhu Jaishwal and Arjun Kumar were among them.

The family members of the air crash victims have been provided with counselling at the hospital premises, which were guarded by security personnel.

Bodies of 22 people, all Nepalese, who died in the tragedy have been handed over to their relatives from Pokhara Academy for Health Sciences on Tuesday, according to Sudarshan Bartaula, a spokesperson for Yeti Airlines.

Both the cockpit voice recorder and flight data recorder were recovered on Monday as search and rescue teams rappelled down a 300-metre gorge to continue their efforts.

The Cockpit Voice Recorder (CVR) records radio transmissions and other sounds in the cockpit, such as conversations between the pilots, and engine noises. The flight data recorder (FDR) records more than 80 different types of information such as speed, altitude and direction, as well as pilot actions and performance of important systems.

The boxes were handed over to the Civil Aviation Authority of Nepal (CAAN). The boxes could offer vital clues about Sunday’s crash.

Experts from France’s accident investigation agency were expected to arrive in Nepal to help authorities to probe the accident, Radio France Internationale reported.

The crashed twin-propeller plane was made by France-based aircraft manufacturer ATR.

Sunday’s accident was the third-deadliest crash in the Himalayan nation’s history, according to data from the Aviation Safety Network.

The only incidents in which more people were killed took place in July and September 1992. Those crashes involved aircraft of Thai Airways and Pakistan International Airlines and left 113 and 167 people dead, respectively.

Newly-appointed Minister for Culture, Tourism and Civil Aviation Sudan Kirati went to the Civil Aviation Authority of Nepal (CAAN) on Tuesday and enquired about the search operation being conducted, according to a press release.

He also instructed the CAAN officials to carry out search work in a faultless manner.