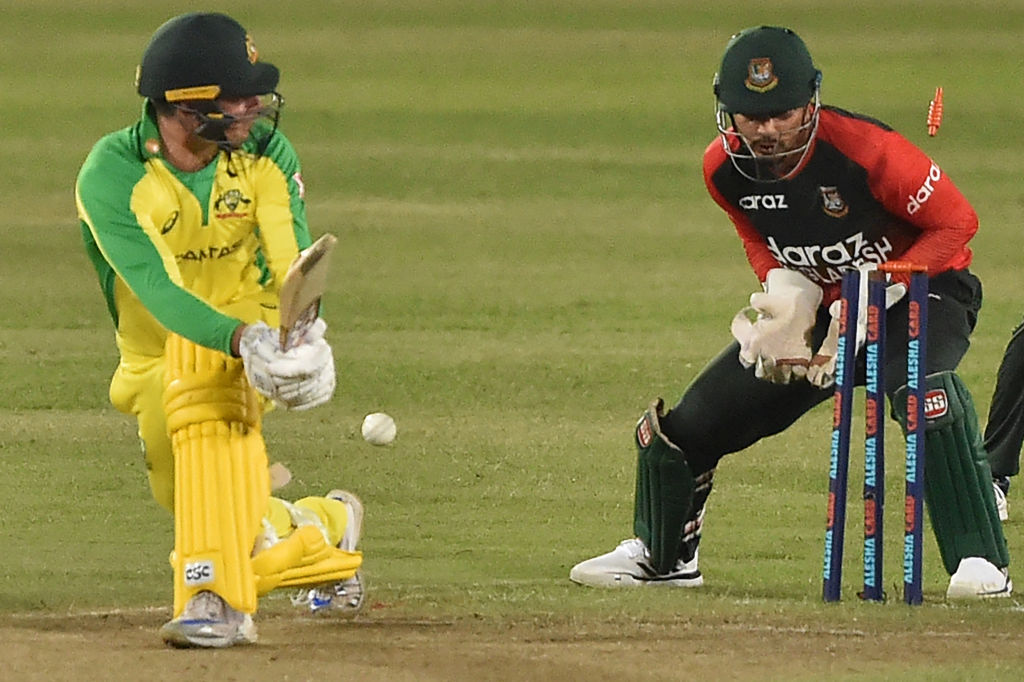 Australia’s Moises Henriques (L) is bowled out by Bangladesh’s Shakib Al Hasan (not pictured) during the first Twenty20 international cricket match between Bangladesh and Australia at the Sher-e-Bangla National Cricket Stadium in Dhaka on August 3, 2021. (Photo by MUNIR UZ ZAMAN/AFP via Getty Images)

SPINNER Nasum Ahmed claimed four wickets as Bangladesh defended 131 to beat Australia for the first time in Twenty20 internationals in Dhaka on Tuesday (3).

Nasum, a left-arm spinner, returned career-best figures of 4-19 to help his team dismiss the visitors for 108 as Bangladesh took a 1-0 lead in the five-match series.

This is the first bilateral series between the two sides. Australia won their four matches against Bangladesh in T20 World Cups.

“We had a team talk during the halfway stage and said that we were 10 runs short, so we had to field well and put more effort,” skipper Mahmudullah Riyad said after the win.

“That’s what you need while defending low totals and have an attacking mindset. They are a very good side and we need to tick the boxes we failed today in the coming games.”

Mitchell Marsh made a valiant 45 but the tourists’ batting faltered from the start with Alex Carey bowled by spinner Mahedi Hasan.

Marsh tried to get the chase on track with a few partnerships including a 38-run fourth-wicket stand with skipper Matthew Wade, who made 13.

Mitchell Starc was the only other Australian batsman to manage double figures before he was bowled for 14 on the last ball of the match.

Shakib Al Hasan, who survived two dropped chances on 18 and 23, top-scored with 36 off 33 balls before being bowled by Hazlewood in the 17th over.

Opener Mohammad Naim (30), Mahmudullah (20) and Afif Hossain (23 not out) also contributed with the bat.

“I thought the bowlers did a terrific job to restrict them to 130,” said Wade.

“But having lost 3 for 10, me and Marsh tried to resurrect the innings but unfortunately we couldn’t do that. We have to find ways to score runs on such pitches.”