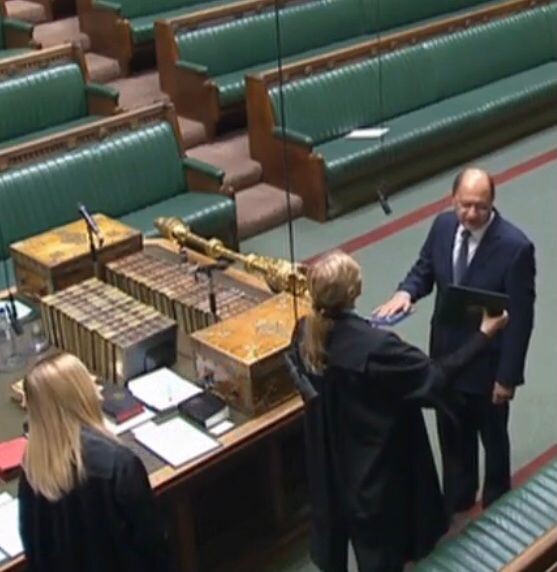 The Rt. Hon. Shailesh Vara MP has paid tribute to HM Queen Elizabeth II in a speech to Parliament.

Mr. Vara spoke of the Queen’s extraordinary sense of duty and commitment to public service and her impact on the UK, the Commonwealth, and the world.

Mr. Vara also spoke of the last occasion when he met Her Majesty, in July of this year at Windsor Castle, when he was sworn into the Privy Council before receiving the Seals of Office for Northern Ireland. This followed Mr. Vara’s appointment to the Cabinet by the then-Prime Minister, Boris Johnson, as Secretary of State for Northern Ireland.

In his speech, Mr. Vara said:

“I will treasure her wonderful smile to me as I shook her hand and as I took the oath of allegiance holding the Bhagavad Gita……. after the ceremony, I was allowed to keep the copy on which I had taken the oath.”

Mr Vara added that the occasion was all the more special as he was the last person to be personally sworn into the Privy Council by Her Majesty.

The Privy Council is a formal body of advisors to the Sovereign, dating back to the earliest days of the Monarchy. Members of the Privy Council are entitled to be called Right Honourable and the appointment is for life.

Mr Vara also recently took the oath of allegiance to King Charles III in Parliament, again on the Bhagavad Gita. A picture of this is attached.