More than 75,000 enjoy ‘Festival of Inspiration’ at Neasden Temple 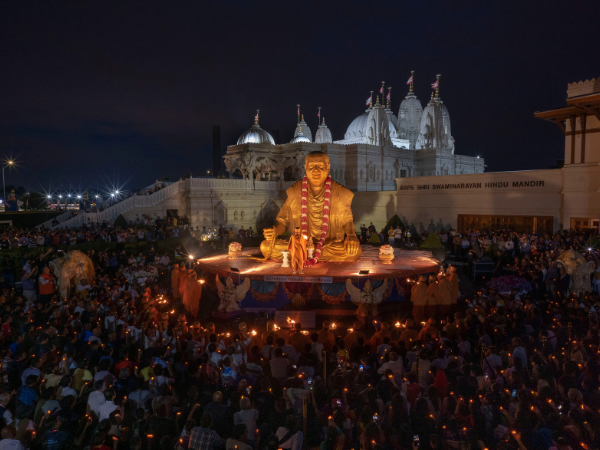 More than 75,000 members of the local community as well as visitors from across London in particular and the UK in general experienced the ‘Festival of Inspiration’ at Neasden Temple – from July 22 to 31.

The event celebrated the very best of Hindu values and Indian culture across a seven-acre site to mark the centennial birth anniversary of His Holiness (HH) Pramukh Swami Maharaj, the creator of the temple and one of the world’s great spiritual leaders.

The festival was inspired by HH Mahant Swami Maharaj, the spiritual successor of Pramukh Swami Maharaj, and delivered by more than 3,000 volunteers. It was dedicated to helping individuals, families and the community enjoy and grow together by learning values that HH Pramukh Swami Maharaj had fostered throughout his life – harmony, respect, compassion and hard work.

The values were vividly conveyed at the Island of Heroes, a children’s adventureland that featured musical productions, a shadow play, a 4D immersive experience, a UV magical jungle, an escape room, an obstacle course, a giant colouring cave, interactive games, and much more.

The young cast and crew had planned, prepared and rehearsed for several months, presenting over 1,200 shows in total during the 10 days of the festival.

Visitors also enjoyed a vibrant blend of live music and dance from the outdoor stage where some of the most acclaimed and sought-after artists of Indian music in the UK performed more than 120 acts over the duration of the festival.

Most enjoyed the performances while savouring the wide selection of delicious and freshly cooked vegetarian cuisine on offer at the ‘Flavours of India’ food court.

Other highlights of the festival included a community health hub where leading British charities and experts delivered screenings, fitness sessions, well-being workshops and cooking demonstrations, multimedia screenings that featured video shows and interactive presentations bringing to life the profound impact of Pramukh Swami Maharaj’s life and work, while thousands participated in the daily maha-arti (Hindu light ceremony) in front of his 27-foot statue in the temple courtyard.

The festival inspired uplifting impressions on families as well as visitors from all walks of society.

Home secretary Priti Patel praised the ceremony to say, “This is just incredible! It is inspiring. It is a ‘Festival of Inspiration’, but the real inspiration lies with the children and the volunteers who made all of this happen.”

Angela Rayner MP, Deputy Leader of the Labour Party, said, “A real joy to take in the sights and sounds of the ‘Festival of Inspiration’ at Neasden Temple. Every child in the country needs to listen to that [‘Mountain of Shravan’ production at the ‘Island of Heroes’]. I don’t think I have ever seen a show or production like that.”

Manoj Patel, a leading volunteer at the festival, said, “We are humbled by the positive feedback and experiences of the visitors. This was all made possible through a dedicated team of volunteers who have worked tirelessly to share the universal values of Pramukh Swami Maharaj to help make our world a better place.”