Morbi bridge collapse that killed 135 an ‘act of God’: Accused to Gujarat court 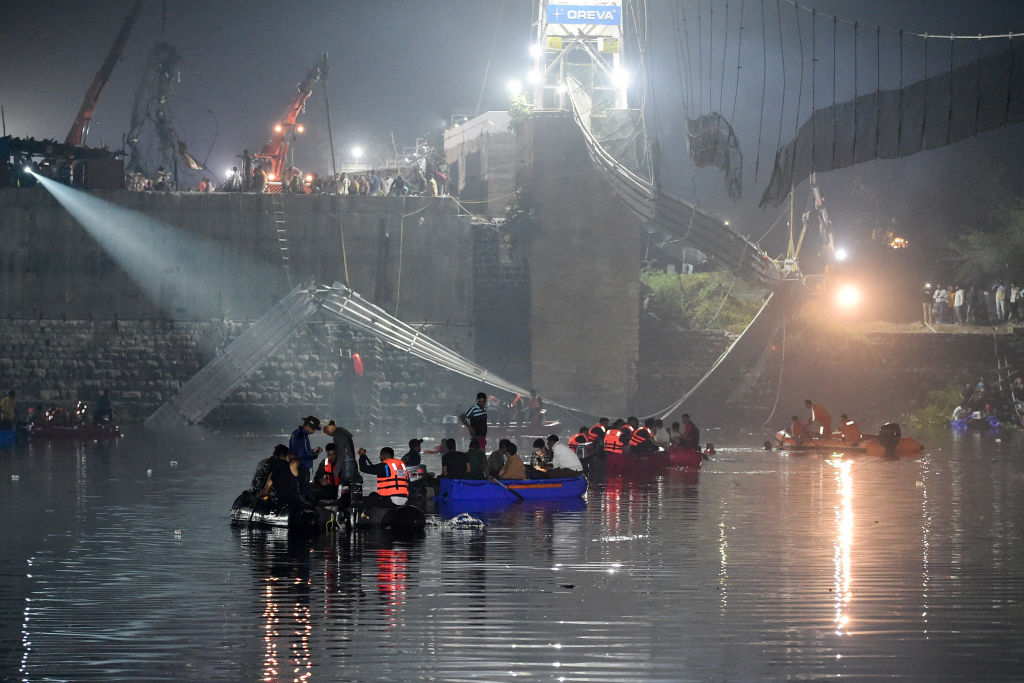 A manager of the Oreva group, one of the nine persons arrested in connection with collapse of a suspension bridge in Gujarat’s Morbi town, sought relief from a local court claiming the tragedy which has claimed 135 lives was an “act of God”, the prosecution said on Wednesday (2).

Chief Judicial Magistrate M J Khan had on Tuesday (1) remanded four of the arrested accused — two managers of the Oreva group and two sub-contractors who had repaired the ill-fated bridge — in police custody till Saturday (November 5). The other five accused were remanded in judicial custody and sent to jail.

The British-era carriageway, built on the river Machchhu, had collapsed on Sunday evening, killing 135 people, including women and children.

In their defence during arguments on remand application on Tuesday, one of the Oreva managers had sought relief on the ground that he was just doing the job given to him by the company and the tragedy was merely an “act of God”, public prosecutor HS Panchal told reporters here.
Ads by

He also informed that the police have added Indian Penal Code (IPC) sections 336 and 337 in the FIR (first information report) related to the case following a preliminary probe.

Both the sections deal with punishment related to rash or negligent acts which would endanger human life or the personal safety of others.

Meanwhile, Chief Officer of Morbi Municipality Sandipsinh Zala on Wednesday appeared before Investigative Officer PS Zala, a Deputy Superintendent of Police, and submitted some crucial documents related to the contract given to Oreva for the bridge’s renovation.

Police had on Monday booked the nine arrested persons under IPC section 304 (culpable homicide not amounting to murder), among others, after the tragic incident.

Citing a Forensic Science Laboratory (FSL) report, Panchal had told the court on Tuesday that experts believed the tragedy occurred after the main cable of the bridge snapped because of the weight of the new flooring.

The court was also informed that both the repairing contractors were “not qualified” to carry out such a work.

Nobody should go through what I have gone through: Mumbai terror attack survivor…

Qatar has conveyed no invitation extended to Zakir Naik for FIFA World Cup:…