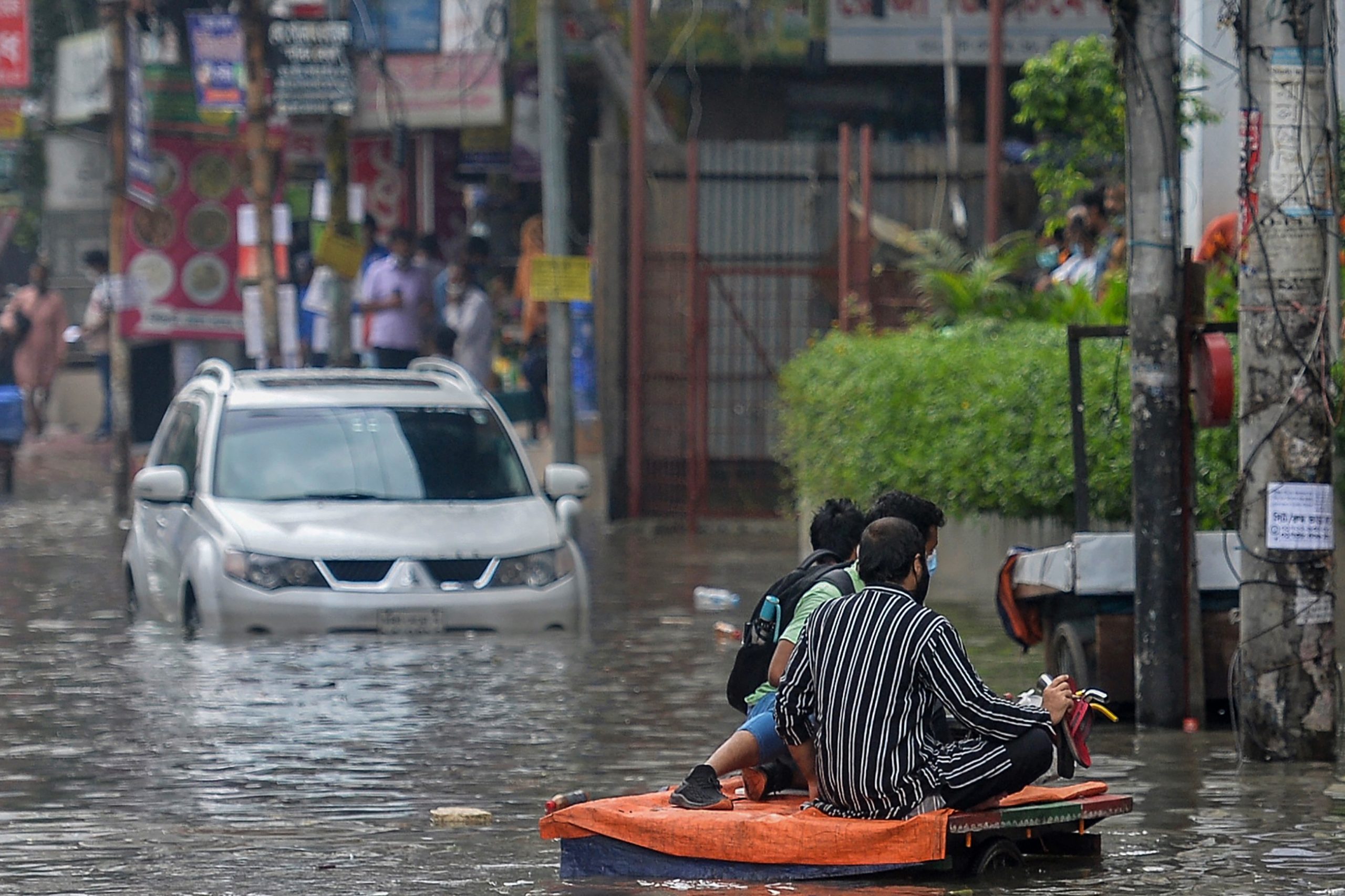 Commuters on a cycle-rickshaw make their way through a waterlogged street after a heavy downpour in Dhaka. (Photo by MUNIR UZ ZAMAN/AFP via Getty Images)

LONDON and Dhaka may be separated by distance and different time zones but the people of the two cities share a common bond over spicy food and cricket.

The city of London is home to more than 200,000 Bangladeshi-origin community, settled mainly in the East End, making significant contribution to the city’s economy.

In a joint column in the New Statesman by Sadiq Khan and Mohammad Atiqul Islam – mayor of London and Dhaka North respectively, they have raised alarm over migration challenge due to climate breakdown.

“As chair and vice chair of C40 Cities, a global network of mayors of nearly 100 world-leading cities dedicated to combating the climate crisis, we are taking urgent action to address the causes and devastating human cost of forced and unmanaged migration created by the climate emergency,” the have said.

They concur and say: “As cities we share a firm and focused resolve to tackle climate breakdown – a challenge that will define not just London and Dhaka’s prospects in the 21st century, but all of our futures.”

“This Saturday (18 December) is International Migrants Day, but it will be like any other day in Dhaka, where an estimated 2,000 people will arrive, having been displaced by rising sea levels and tropical storms elsewhere in the country.

“But the Bangladeshi capital itself is also increasingly vulnerable to river flooding that threatens low-lying informal settlements, where 40 per cent of the capital’s 18 million-strong population live, many of whom are rural internal migrants. It’s no wonder that many thousands migrate overseas every year, some making perilous journeys across Asia and Europe, with hopes of making it to cities like London,” Islam said.

Reports suggest, globally people are forced to move because of climate crisis. According to the World Bank estimate, 216 million people across the six world regions could be displaced within their counties by 2050 due to climate crisis.

Mayors across the world, including Khan and Islam are “taking urgent action to address these issues”, but they say that “we cannot do it alone”.

That’s why C40 Cities and the Mayors Migration Council (MMC) launched the C40-MMC Global Mayors Task Force on Climate and Migration in 2021. The task force is led by the mayors of a diverse group of global cities – including developed, developing, coastal, inland, large and mega-sized cities – which are dedicated to accelerating local, national and international responses to the challenges of climate and migration.