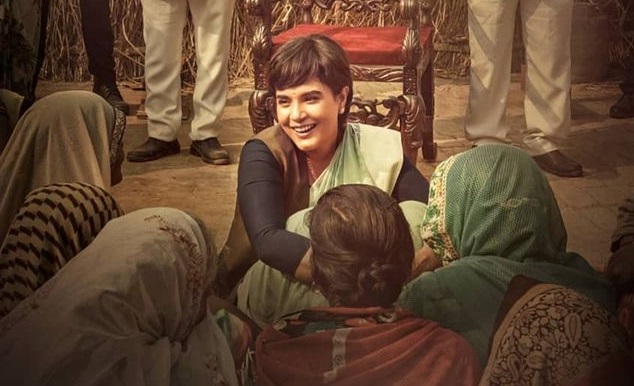 Politics is a concept that not many filmmakers like to explore especially nowadays as it might create a lot of controversies. However, Subhash Kapoor decided to bring a fictional political story on the big screen with his movie Madam Chief Minister which stars Richa Chadha in the lead role.

Madam Chief Minister is about Tara (Richa Chadha) who belongs to a lower caste (as per the Indian caste system) and works as a librarian at a college in UP. She is having an affair with an upper-caste student of the college Indu Tripathi (Akshay Oberoi), but it ends up in an ugly way. Soon, Tara meets Masterji (Saurabh Shukla) who is also from the lower caste and runs a political party for the betterment of his people.

Through Masterji, Tara enters politics and wins against the sitting Chief Minister of the state. She then becomes the new Chief Minister, and then the movie moves forward with Tara’s journey as the Chief Minister.

The story of the film is average and it is quite predictable. There are not many surprise elements in the film. However, what saves the movie is the narration of Subhash Kapoor. He manages to keep us engaged with his direction for those 124 minutes.

The first half of Madam Chief Minister is very interesting, but the second half could have been better. There are some amazing scenes in the film, and the dialogues are the highlight here. The sequences where Tara is giving a speech are wonderfully written and shot.

Talking about performances, Richa Chadha is simply excellent in the film. She has given one of her career’s best performances. Saurabh Shukla is wonderful, Akshay Oberoi is damn good, and Manav Kaul is perfect in his role. A special mention to Subhrajyoti Barat, he is simply outstanding.

Madam Chief Minister is a movie where songs don’t have much to do, but the background score of is good.

Overall, Madam Chief Minister is an engaging political drama, and if you are a Richa Chadha fan, then it’s a must-watch for you.