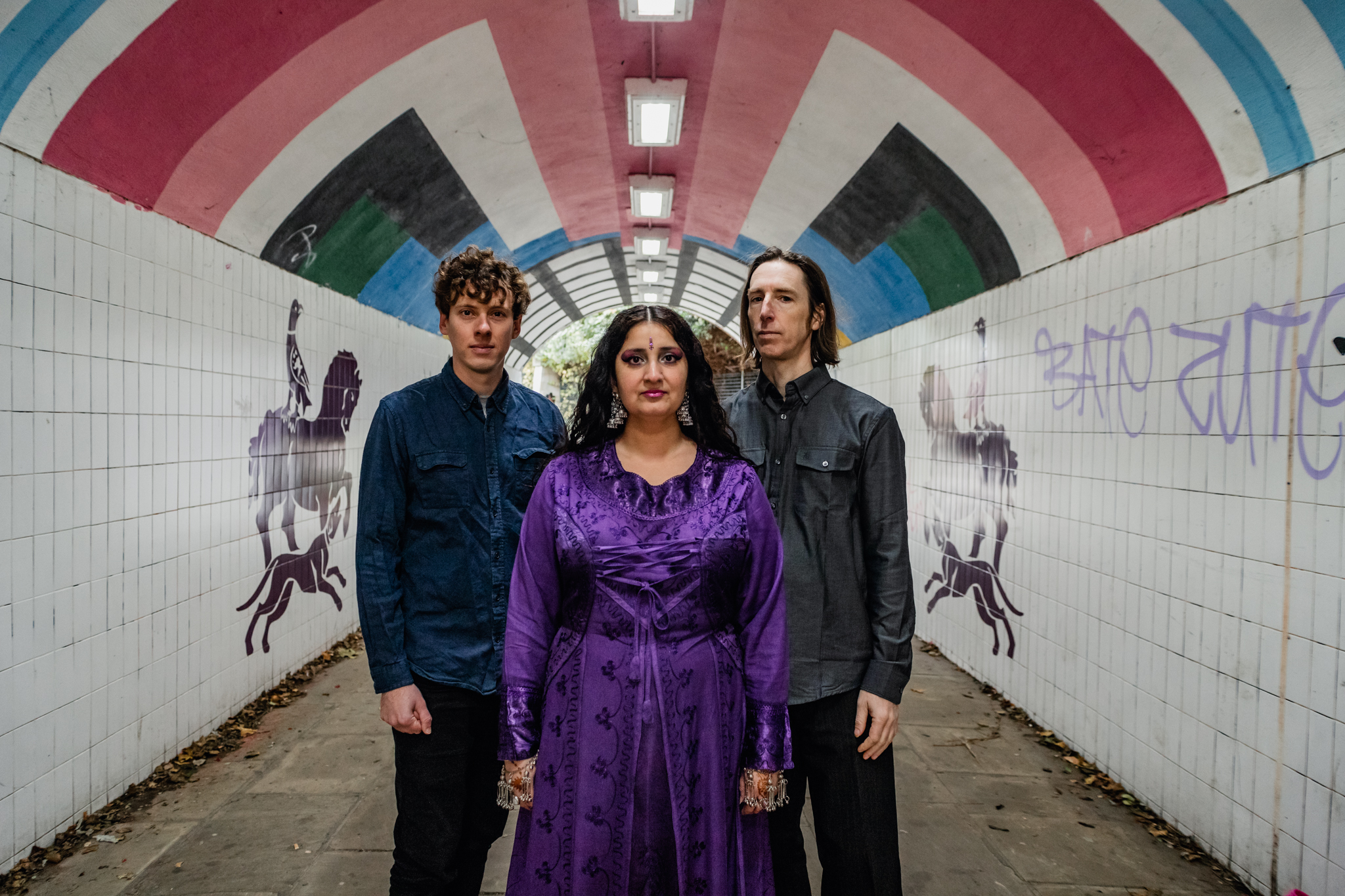 Kinaara are a terrific trio from Leeds combining varied musical influences in contemporary songs that have connected with cross-cultural listeners.

Their impressive repertoire ranges from Punjabi folk to Celtic songs, which are presented with dynamically distinctive arrangements.

Since they began in 2018, the band has combined eye-catching live performances with unique music, which included their 2021 debut EP Across The River.

What first connect you to music?
Satnam: I started learning to sing at the age of four when my naniji began teaching me kirtan (Sikh hymns). From there my love for singing began.
Simon: I liked playing drums before I got into music and then through drums I got into music.
John: For me it was seeing my cousin playing electric guitar one Christmas and it just started from there.

How would you describe the sound of your band Kinaara?
John: With bluesy electric guitar, Indian vocals, and jazz drumming, you will hear Punjabi language songs and Celtic songs presented in Kinaara’s own urban electric arrangements.

What inspired the name Kinaara?
Satnam: I was listening to Noor Jehan song Haye O Dilbar Dildara and the word caught my attention. The meaning of the word; the edge. The edge of the water, where the water meets the land, seemed fitting for us. We are all from different musical backgrounds, yet we meet at a point to create our music.

What has it been like working as a trio?
John: It’s fun and challenging.
Simon: It’s always nice to work with different people and explore making music in various styles.

Tell us about the EP Across The River?
Satnam: Our first EP has four traditional tracks on it. Three of them are Punjabi; Lang Aaja, Chan Kitha Guzari Aayi and Heer, to reflect my upbringing and love for Punjabi folk songs. The other track is Celtic song She Moved Through The Fair, because the members of Kinaara are from different backgrounds and we want our music to reflect that. As a British singer, when I hear western folk songs, particularly Irish ones, I can hear similar ornamentation in there, which is used in Indian singing. So, I really enjoyed working on She Moved Through The Fair.

How does your second EP Colours in Black compare to the debut EP?
Simon: I think that we’ve refined our sound. It’s more coherent and we continue to work better together as a trio.

What inspired the Colours In Black title for the EP?
John: A few of the songs on the EP mention the colour black. Often black can be used to describe a negative emotion but not in the case of these songs. The songs depict other colours and emotions.

Who are you hoping will connect with the songs on the new EP?
John: We are hoping that Colours In Black will appeal to audiences from different backgrounds and age ranges.

What is your favourite song on the EP?
Satnam: I have two favourites; Kaalay Rang and Black Is The Colour.
Simon: We have a close connection to all the songs, but if I had to pick one it would be Epiphyllum.
John: I really like She Spoke With Her Ey­es, which is a cover of Kehnde Ne Naina.

How much does live performance mean to you as a group?
Satnam: Live performance is so important to us. It’s how we get to connect with people and share our music with them. Our performance at Musicport in 2021 was the most memorable. The audience were amazing and loved our set.

What is the plan going forward?
Simon: To get more gigs, sell EPs and make good music.
Satnam: We are hoping to get more gigs, which will help us to bring our music to new audiences and gain recognition as a band. Because we released our first EP during the Covid-19 pandemic, live performances were few and far between, which meant we were unable to promote ourselves as much. We will continue to work on new music, including original compositions, with a view to our next release being an album.

Why do you love music?
Simon: It is really fun to play and make music.
Satnam: Music is part of me and my calling in life. I feel like I have been given a gift, which I am fortunate enough to share with others. When you see the effect that your music has on someone it’s an amazing feeling.
John: I love music because it’s an opportunity to take oneself out of the everyday and think bigger.

Why should we pick up the new EP?
Simon: Because it sounds great and it’s different to most other EPs, released recently. I think that with the range of tracks; Punjabi folk, jazz, Celtic and instrumental, there should be something on there for everyone.