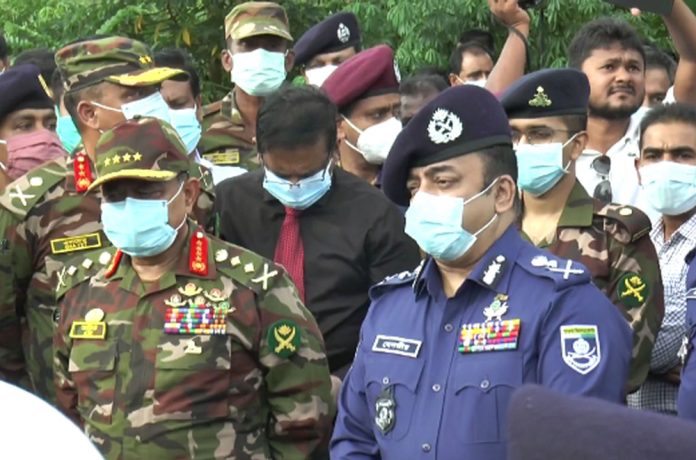 The chiefs of the Bangladesh Army and police on Wednesday termed the killing of a retired Army major, who had served Prime Minister Sheikh Hasina as a member of the special security force, in police firing as an “isolated incident”, saying that it would not create any rift between the two forces despite attempts by some quarters.

Major (Retired) Sinha Mohammed Rashed Khan, 36, who took voluntary retirement two years ago, was killed in police firing on Friday at a check-post in Cox’s Bazar, triggering an uproar across the country.

Immediately after the incident, the authorities concerned withdrew 16 policemen, including the check-post in-charge.

“We all in the military are in grief as what has happened . . . the police force is shocked as well,” Army Chief General Aziz Ahmed told a media briefing along with Inspector General of Police Benajir Ahmed.

They also visited the crime scene together.

Aziz said the incident appeared to be an “isolated event” and both the Army and police have confidence on a high-level committee constituted to investigate the case.

“The (individual) perpetrators of the incident will have to shoulder the incident,” he said, adding the police force as an institution should not be held responsible of “what happened here”.

Benajir echoed the Army chief”s terming of the incident as an “isolated” one, saying that Rashed”s death would not create any rift between the two forces despite attempts by some quarters to fish in troubled waters.

“Some quarters are trying to use the incident to create a rift between police and Army through provocative comments . . . they will not succeed,” Benajir said.

Officials and reports said that ahead of the Army chief’s media appearance along with Benajir at the crime scene in Teknaf sub-district, they held a closed door meeting with senior administrative officials in Cox’s Bazar.

Though no official statement was issued either by the Army or police, the two forces apparently took stances opposing each other while a visibly leaked report of a military-led intelligence agency indicated that the incident sparked anger among Sinha”s ex-colleagues.

“I will request all not to create any rift or misunderstanding between army and police over the incident,” Aziz said.

Benajr said that “on behalf of the police force, we can assure that the probe body formed by the government will conduct investigation into the incident without any influence”.

According to family members, Rashed used to make travel documentaries following his retirement and was staying at Cox’s Bazar for the last two months for making a film.

Rashed was killed when he was returning to Cox’s Bazar from Teknaf along with an associate in a private car, the Prothom Alo newspaper reported, citing an “intelligence agency report”.

The report said as the duo reached the check point, police halted the vehicle and after knowing Rashed”s identity, signalled them to proceed. However, they immediately stopped them again and ordered the duo to come out of the car.

The report said as Rashed came out of the car, the check-post in-charge inspector Liakat Ali shot him three times.

Shortly after the incident an operative of the intelligence agency and villagers from a nearby area came to the scene and found Rashed lying in a pool of blood but alive.

However, when the intelligence agency operative wanted to record the video of the scene identifying himself, police snatched away his handset and the identity card.

A local police officer, however, initially claimed that when policemen at the check-point halted the vehicle suspecting them to be robbers, an altercation ensued as Rashed brandished his pistol, prompting the inspector to fire gunshots in “self defence”.

He said police later conducted a search at the rest house where Rashed and his associate were staying and recovered foreign liquor and cannabis from there.

Prime Minister Hasina on Tuesday assured Rashed”s mother that a “proper” probe would be carried out into his killing by the police.