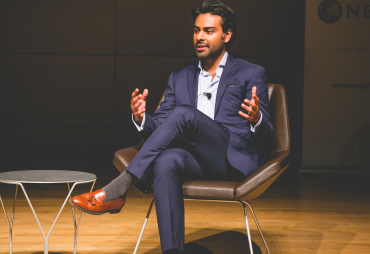 Karam Hinduja, 29, the grandson of Srichand Hinduja, has been appointed as the new CEO of  the family’s Geneva-based Hinduja Bank. He succeeds Gilbert Pfaeffli, who has been at the helm since 2016.

Born in Britain and raised in Switzerland, Karam represents the newest generation of the Hinduja family. The Swiss bank is chaired by Shanu Hinduja, his mother. Srichand Hinduja, 84, who founded the bank in 1994, has a reported net worth of $30 billion, and ranks among Switzerland’s richest.

According to Karam, the bank will focus on wealth management and business with entrepreneurs. He said the Swiss bank’s ties to the Asian market mean it can help Swiss companies gain a foothold in the fast-growing region.

Karam Hinduja is the founder and CEO of Timeless Media, a diversified media company. He studied Political Science at Columbia University.

Karam maintains a strong connection to his family’s Indian roots and plays an active role in the family’s diversified global business. He works closely alongside his grandfather and SP’s daughters-Shanu Hinduja and Vinoo Hinduja, who directs the award-winning PD Hinduja Hospital in Mumbai.