“It was quite empowering”, says Britain’s first hijab-wearing police officer 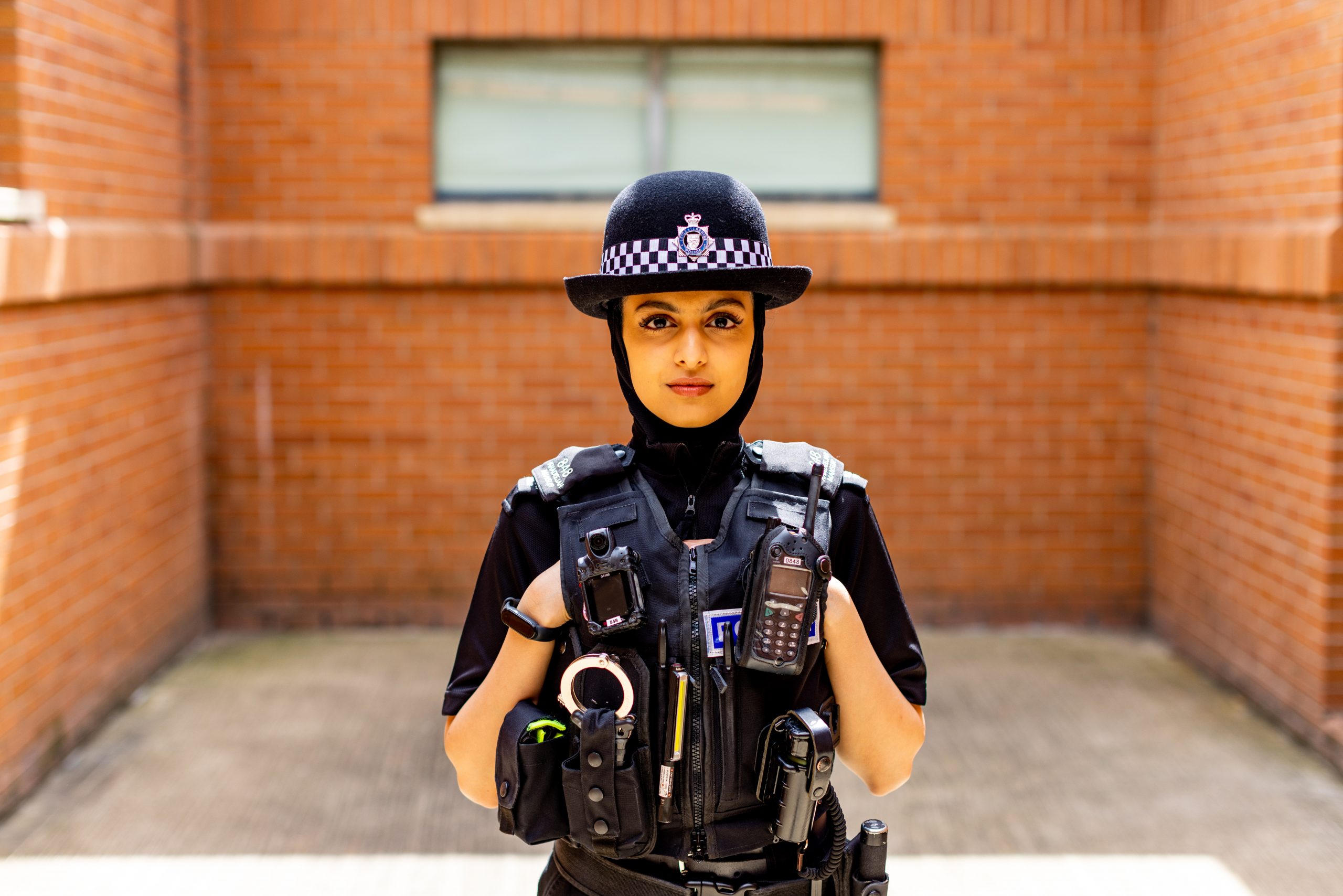 Khadeejah Mansur joined the Leicestershire Police force in October 2020 because she wanted to “represent our diverse communities, especially here in Leicester”.

“The message I want to send is that we are a very diverse force and that nothing is going to stop you no matter your background, race or religion,” Mansur told Eastern Eye.

The 23-year-old is currently starring in the BBC series Fresh Cops – a docuseries filmed from the perspective of the young recruits in their 20s as they learn the ropes, while also revealing the realities of life on the frontline and the diverse communities they serve.

When she joined the police force, she had only recently started wearing the hijab and described it as “perfect timing” that a hijab specifically designed for police officers was being introduced.

There had been previous failed attempts at introducing hijabs for officers in Leicester with concerns relating to the safety of the garment whilst officers are on frontline duty.

However, in 2021 after 16 months of research and development into the fabric and fit, a version which is designed to sit comfortably with headgear worn by police, such as caps or earpieces, was given the go-ahead to be trialled.

During her training, Mansur was asked to trial the hijab design, which was originally created for New Zealand police by designers at Massey University College in Wellington.

“This isn’t just important for me, but for other Muslim women joining the force. Because I’m young, female and also wearing a hijab, people are surprised because it doesn’t quite fit the stereotype. But people will see me and other officers, and they will relate to us, and we can build that rapport with them,” she says.

‍How did she feel to be the first serving hijab-wearing police officer?

“It was a proud moment for me. I did feel a tiny bit of pressure, but mostly, it was quite empowering. But hopefully in a couple of months, there’ll be more that do join.”

Mansur added that the other emergency services are keeping an eye on the usage of the hijab in the police force and are ‘looking at designing their own’.

The 23-year-old revealed she has gone into schools to talk to young girls about her experiences in the police force.

“It’s nice to know that it might inspire other people to want to join when they grow up. Because sometimes they think they can’t join the police because of how they look or what they wear, but I guess (looking at me) that breaks that straightaway. It’s a stereotype that’s actually not true,” says Mansur.

“Even just out on the streets, when we’re patrolling, a lot of them naturally just get interested and that’s when you get to have that conversation with them about the journey that I’ve had and it’s nice to hear that they start to see that that stereotype doesn’t exist anymore with police officers. It opens their mind into the profession of policing. Hopefully it does inspire people to look at a career in the police.”

According to the latest figures, 92.7 per cent of police officers were white. There were only 3.1 per cent from an Asian background.

Mansur says she has seen the police make a concerted effort to have more ethnic minority representation with their ranks.

“Representation is really important, that was one of the reasons why I joined – to represent my community.  The people I have spoken to within our communities, they have said, ‘it’s nice to see someone like you and maybe it’s not for me, but I’d recommend it to a friend or a family member,” she said.

“People like to see people from the Asian community in the police force because they hadn’t seen that before. It’s actually been a really good, positive reaction from our community.

For Mansur, joining the police force came as a drastic change from her previous job as a digital marketer.

She had a desire to do leave the predominantly office-based role and it was her mother who suggested the police after she had interacted with some police officers at the local community centre, saying it would bring Mansur “out of her shell”.

“I was going from just sitting in an office all day to being out on foot and doing everything and anything. It was that change that I wanted in the fact that I didn’t want to be doing the same thing every day. Luckily with the police, no two days are the exact same.”

Mansur admits that having grown up watching cop shows, she was unsure if she would be able to handle some of the more difficult aspects of the role, especially because she is a ‘very small’ person.

She credits the support of her fellow officers, recruitment team, and sergeants who gave her support and reassurance and instilled in her the mantra “whatever we deal with, we deal with it together”.

“Ever since I joined, everyone was very, very open to having police officers from different communities and different backgrounds. That was why I wanted to join Leicestershire police specifically, because I’ve never really seen any other forces push to have more diverse communities within their force.

“We also see communities within the police not necessarily sticking to their own individuals, but also getting together as all officers. That’s the best thing about Leicestershire police, it does really push for that diversity.”

The level of support is evident in the first episode of Fresh Cops when Mansur encounters her first dead body.

“In those kinds of situations, at the time you don’t think about what you’re feeling, you just kind of want to deal with what you’ve got in front of you. But afterwards you can speak to any of your colleagues, because they will literally feel the exact same way as you,” she says.

“You’ve also got your supervisors that come and approach you and say, ‘listen, I know you’ve seen something a bit distressing, something that you don’t normally see. How are you feeling?’ It’s that sit down conversation that you can have as well. if you need that help, you know it’s there.”

Mansur is currently doing a degree in policing and is aiming to become a CID in the future.