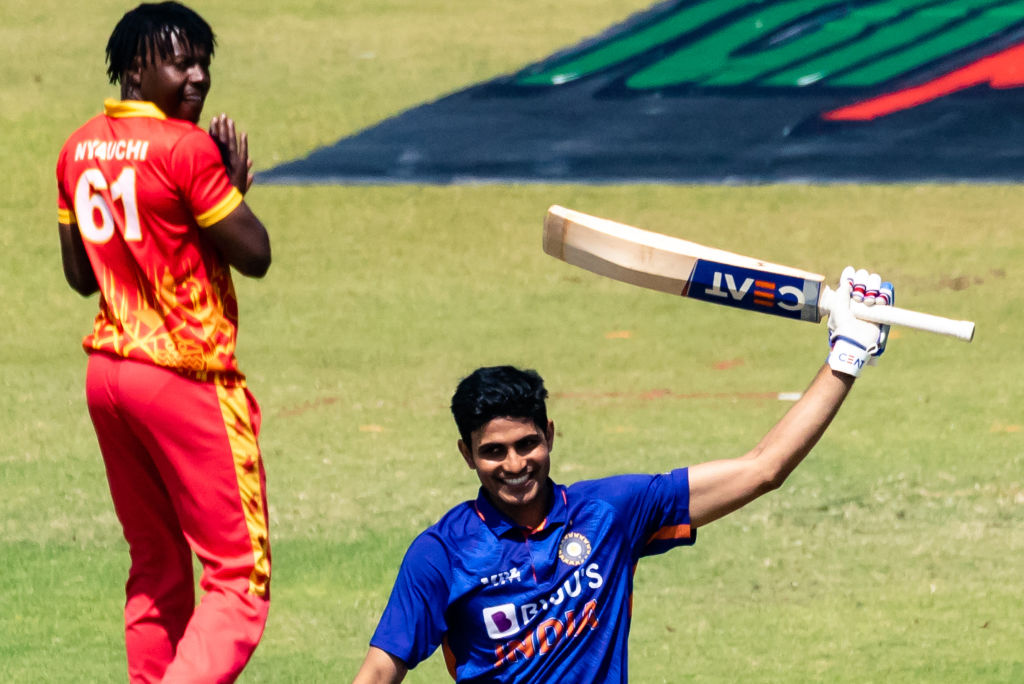 India’s Shubman Gill (R) celebrates after scoring a century (100 runs) during the third one-day international (ODI) cricket match between Zimbabwe and India at the at the Harare Sports Club in Harare on August 22, 2022. (Photo by Jekesai NJIKIZANA / AFP) (Photo by JEKESAI NJIKIZANA/AFP via Getty Images)

India’s Shubman Gill dedicated his maiden international hundred to his father after getting “schooled” by him for missing the mark earlier, the top-order batsman said after his match-winning 130 in the third one-dayer against Zimbabwe in Harare.

Gill’s hundred secured India’s 3-0 series sweep on Monday and the 22-year-old was also adjudged player-of-the-series for the 245 runs he accumulated in three matches.

“This one is for my dad as he has been my primary coach,” Gill said after India’s nervy 13-run victory.

“I got a bit of schooling day before yesterday when I was out on 33. So this is for him.”

“My heart was beating when I got into the 90s. I had got out in the 90s thrice before and never got a hundred in international cricket. It’s always special to get a hundred.”

Gill hit 15 fours and a six in his knock and changed his bat after completing his fifty.

“I was just trying to minimise my dot-ball percentage. If you look at my innings, I didn’t try to hit the ball. I just tried to time and tried to pick the gaps as much as possible.”

“The bat was pretty good and that’s why I changed it after my fifty as I wanted to save it.”

“He doesn’t play many dot balls, that is his biggest positive,” spin-bowling all-rounder Patel said.

“He keeps taking ones and twos and then converts the bad balls into boundaries. He plays spin very well.

“When there are five fielders in the circle in the middle overs, he uses sweep and reverse-sweep well to keep getting boundaries.”