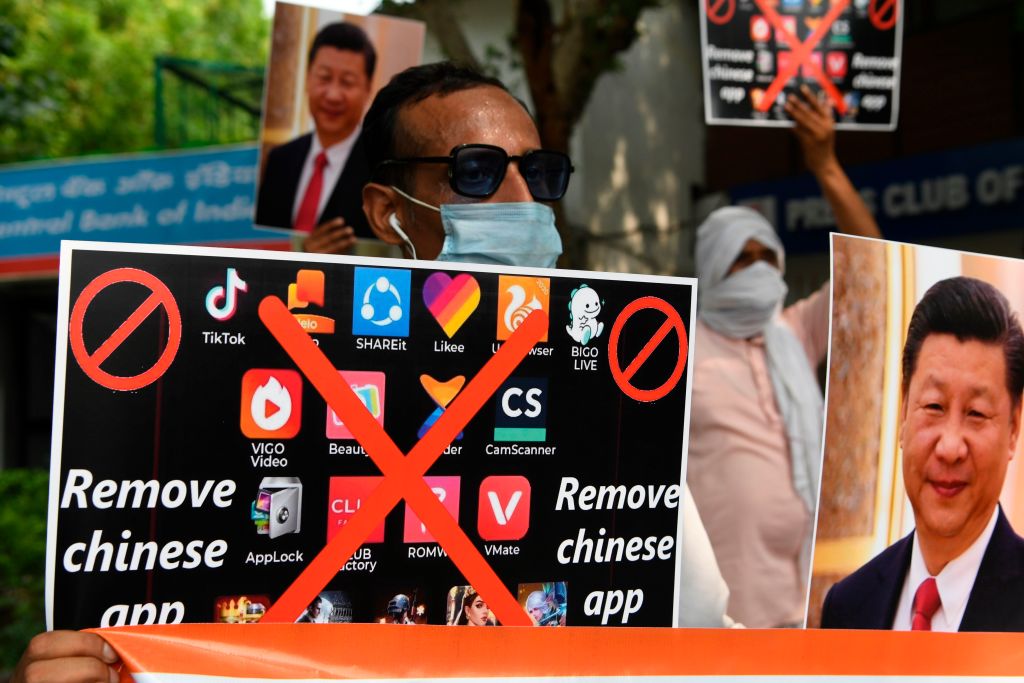 Members of the Working Journalist of India (WJI) hold placards urging citizens to remove Chinese apps and stop using Chinese products during a demonstration against the Chinese newspaper Global Times, in New Delhi on June 30, 2020. (Photo by PRAKASH SINGH/AFP via Getty Images)

AN Indian ban on dozens of Chinese apps following a border clash between the two nations has possibly derailed a $1 billion India expansion plan of China’s ByteDance, while also sparking an uproar from users of its popular TikTok video app.

TikTok was blocked on Google and Apple app stores in India after New Delhi said on Monday (29) night it was among the 59 apps which it believed posed a “threat to sovereignty and integrity”. Late on Tuesday (30), TikTok’s already downloaded versions on phones in India stopped showing any videos.

With more than 600 million downloads, India has accounted for 30 per cent of TikTok’s two billion downloads worldwide so far. ByteDance last year hired several senior executives and laid out plans to invest $1 billion in India, its top growth market.

TikTok said in a statement India had invited the company to respond to the ban and submit clarifications, adding that it complies with all data security and privacy requirements. It did not comment on the fate of its expansion plan.

“Our managers say there is no need to panic and it’s business as usual. But we all are concerned about losing jobs,” one ByteDance content reviewer in the southern city of Hyderabad told Reuters on condition of anonymity.

“If this is not rolled back, these companies would be constrained to cut back their operations in India, potentially resulting in a loss of employment,” said a lawyer who advises a Chinese company whose app has been banned in India.

Many TikTok users posted videos expressing their displeasure before the app stopped showing content on Tuesday. Some told their followers to track their future posts on YouTube or Instagram.

One user @omkarsharma988 posted a video in which he throws utensils to the ground, hits a chair and weeps, with a Hindi song playing “You’ve left me, how will I live now?” The video had been liked 218,000 times, as the app still functions on phones on which it is already downloaded.

Another user posted a video showing TikTok’s logo in a photoframe with a garland around it, with a headline “RIP TIKTOK!!” as a song played in the background.

When TikTok was banned briefly last year after a state court said the app encouraged pornography, the company told the Supreme Court the ban cost it roughly $15 million a month.

Several Indian lawyers said the chances of success of a legal challenge this time were slim given the government had invoked national security concerns, meaning the Chinese companies can only hope to lobby India to reverse the decision.

“From a legal perspective, it (the ban) is sound because grounds like national security are difficult to challenge,” said Santosh Pai of Link Legal, which advises Chinese companies.

The ban has also disappointed Tencent, which has apps on the market and is also a major investor in Indian startups, two sources aware of the company’s concerns told Reuters. New Delhi in April mandated screening of incoming investments from countries like China, hitting the likes of Tencent.

While its WeChat messaging app is not that popular in India, the company fears the government could impose a ban later on the mobile version of its blockbuster game PlayerUnknown’s Battlegrounds, said one of the sources. Tencent declined to comment.

Two games of China-based firms, “Mobile Legends” and “Clash of Kings”, were among those banned on Monday.

On June 15, Indian and Chinese troops brawled for several hours on their disputed Himalayan border, killing 20 Indian soldiers and wounding at least 76, India said. China has not disclosed how many casualties its troops suffered.