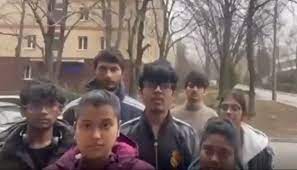 A GROUP of students stuck in Ukraine has made a desperate appeal to the Indian government to evacuate them from the eastern European country “as fast as possible”.

The students have been stranded in Ukraine as the nation closed its airspace because of the ongoing military action by Russia on its territory.

In a video message, they said they are students of a state medical university in southern Ukraine and have been struggling amid the emergency.

They are unable to find their way out of the country and running out of ration, the group of teenagers said.

“About 2,000 students are stuck in this place and we are not finding any way to rush to the Romanian border right now,” said a young man in the group.

Another in the group added, “it would be grateful if you arrange some buses or trains for the students to evacuate as soon as possible”.

“We just request the Indian government to intervene and make evacuation as fast as possible”, they said.

About 20,000 Indian students have been studying in Ukraine and some 4,000 of them have reportedly exited the country as Russia launched the military attack.

The Indian government has advised its citizens in Ukraine not to move to any border posts “without prior coordination” with its officials.

External affairs ministry spokesman Arindam Bagchi tweeted on Saturday (26), “All Indian Citizens in Ukraine are advised to not move to any of the border posts without prior coordination with Government of India officials at the border posts (helpline numbers established) and the Emergency numbers of Embassy of India, Kyiv”.

In New Delhi, external affairs minister S Jaishankar said on Saturday (26) that the first evacuation flight to Mumbai with 219 Indians had taken off from Romania.

He said India was making progress in the evacuation of Indian nationals from Ukraine.

“Regarding evacuation of Indian nationals from Ukraine, we are making progress. Our teams are working on the ground round the clock. I am personally monitoring,” he said on Twitter.