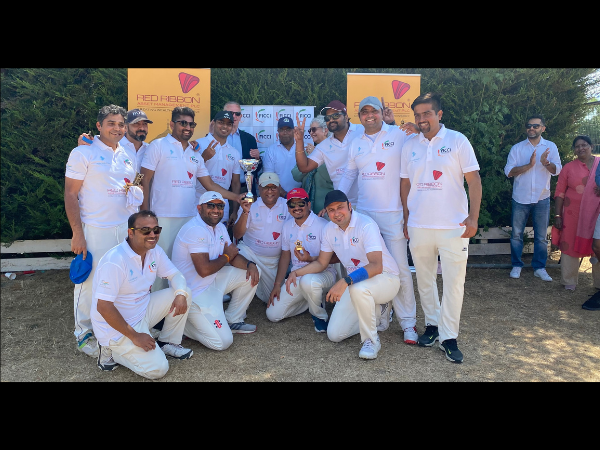 THE Indian High Commission in the UK and the Federation of Indian Chambers of Commerce and Industry (FICCI), UK, organised a friendly T20 cricket match at the Indian Gymkhana in London on Sunday (24) to celebrate ‘Azadi Ka Amrit Mahotsav’, an initiative of the Indian government to celebrate the 75th anniversary of India’s Independence.

The cricket match was also organised to show solidarity with the Indian contingent which is participating in the Commonwealth Games 2022 which kicked off in Birmingham, UK, on Thursday (28).

The match turned out to be a thrilling encounter that went down to the last over with FICCI XI emerging victorious by just five runs.

Speaking during the post-match presentation, Ghosh said, “The friendly match between the two teams was part of the various activities being organised by the High Commission to celebrate ‘Azadi ka Amrit Mahotsav’. Such occasions also allow for interactions in an informal setting between the community and high commission officials where issues are discussed, and queries related to consular and visa matters are responded to.”

Baroness Parashar said, “I am delighted that we were able to organise this friendly cricket match between FICCI Council members and the Indian High Commission to mark India’s 75 years of Independence. It was good to see families engaged in planning and cheering! It was equally fitting that this match took place just before the
start of Commonwealth Games. It was a reminder that ‘Friendly Sports’ are not just about winning or losing but more about how we play. They are fun and provide opportunities for informal interaction and help to build better understanding.”

Ghosh was adjudged the ‘man of the match’ for his valiant 43 not out. Pradeep Rawat, who played for the high commission team, was picked as the bowler of the match with five wickets for 22 runs in his quota of four overs.

Aditya Rathod of FICCI XI was the batter of the match.

HCI and FICCI intend to make the cricket match an annual feature and rotate the trophy year on year.