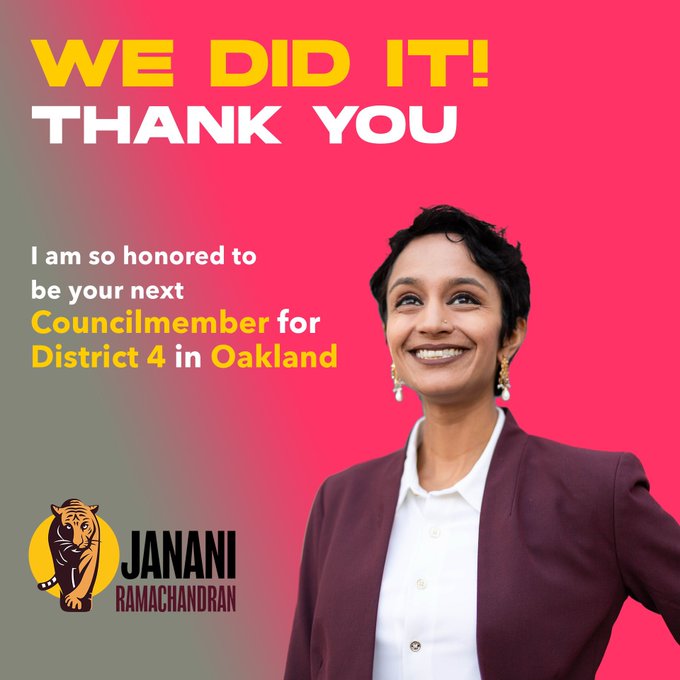 Janani Ramachandran, a 30-year-old Indian-American attorney, has emerged as the youngest and the first queer woman of colour to take oath as the Oakland City Council member in the US state of California.

Ramachandran took the ceremonial oath wearing a saree as the Oakland City Council member for District 4 in an inauguration ceremony held on January 10.

“WE WON! Honoured to be the next City Councilmember for Oakland District 4!! I will officially be the youngest Council member in Oakland’s history, the 1st #LGBTQ woman of colour & 1st South Asian to serve on Oakland City Council,” the public interest attorney tweeted.

She took to Twitter to express her gratitude and said, “Immensely grateful for all those who believed in me and helped build our movement. Honoured to have my loved ones by my side as I took the ceremonial oath!” Ramachandran describes herself as “a daughter of immigrants from a small village in South India.

Ramachandran currently serves on the California Commission on Asian and Pacific Islander American Affairs and has previously served as a Commissioner at the City of Oakland Public Ethics Commission, according to her website.

The Stanford University and University of California, Berkeley pass-out has worked in several legal non-profits.

As a first-time candidate in her 2021 run for State Assembly, she shocked political experts by advancing to the special election runoff, coming out on top amongst a field of previously elected officials, her website said.