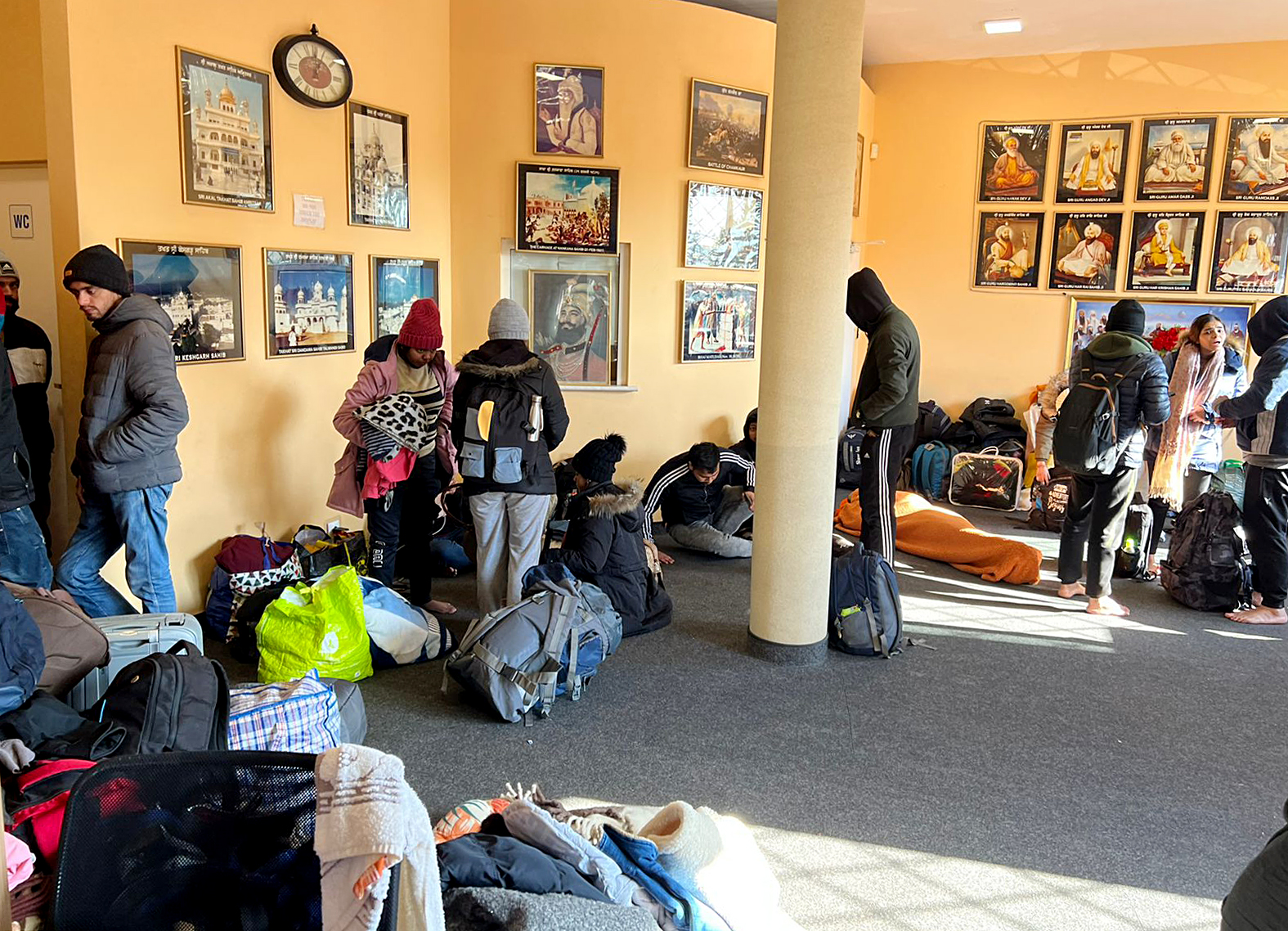 INDIA has stepped up efforts to evacuate its nationals from Ukraine as new Delhi confirmed on Tuesday (1) that a student had died in shelling in Ukraine.

Prime minister Narendra Modi has directed the Indian Air Force to bring back stranded citizens, most of whom are students pursuing medicine in Ukraine’s universities.

British MPs, meanwhile, told Eastern Eye they voiced their support for Ukrainian nationals and urged the UK to do more for refugees as the Russian invasion of the country continued for the sixth consecutive day on Tuesday (1).

India mourned the loss of Naveen Shekarappa Gyanagoudar in Kharkiv, a student who died in the eastern city of Kharkiv on Tuesday (1).

“With profound sorrow we confirm that an Indian student lost his life in shelling in Kharkiv this morning,” India’s foreign ministry spokesman Arindam Bagchi said on Twitter.

New Delhi said it urged Russia and Ukraine to secure safe passage for around 12,000 of its stranded nationals and Bagchi said the ambassadors of both countries had been called in.

Prime minister Modi expressed anguish over the death of the fourth-year medical student and also spoke to his father in the southern state of Karnataka.

Earlier in the day, the boy’s father pleaded to Indian authorities and representatives in Ukraine: “Bring back my son’s dead body.”

India’s foreign secretary Harsh Vardhan Shringla said a C-17 IAF aircraft was scheduled to fly out at 4 am on Wednesday (2) to Romania to bring back Indians.

“Over the next three days, 26 flights have been scheduled to bring back Indian citizens,” he said.

In addition to Bucharest and Budapest, airports in Poland and the Slovak Republic will also be used to operate evacuation flights, he added.

Until Tuesday, private Indian carriers were evacuating Indians from Romania and Hungary, countries with land borders with Ukraine on the western side, after the Ukrainian airspace was shut last Thursday (24) following the Russian military invasion.

Kharkiv, Ukraine’s second city, has been a target for Russian forces since president Vladimir Putin launched an invasion of the eastern European country last Thursday (24).

A Russian armoured column entered Kyiv on Tuesday and invasion forces fired lethal rocket barrages into the centre of the city.

Kyiv’s mayor published a video showing the moment when a tall TV antennae in the city was engulfed in flames, apparently hit by a rocket.

In Britain, Slough’s Labour MP Tan Dhesi told Eastern Eye, “What is happening in Ukraine is a tragedy. I fully support the Ukrainian people in their fight against this unprovoked and heinous attack instigated by (Russian president Vladimir) Putin.

“Continuing to work in unity with allies, the hardest possible sanctions must be taken against all those linked to Putin and against the Russian government’s interests.”

He added, “Despite the tough talk from the UK government and warm words for Ukrainians, their actions, especially in regard to supporting Ukrainian refugees, have been wholly inadequate.

“As thousands of Ukrainians flee war, except in very limited circumstances, the Home Office continue to apply normal visa restrictions, such as Ukrainians having to apply as seasonal fruit pickers, rather than as genuine refugees.

“This is immoral and unacceptable, demonstrating just how hollow the government’s ‘commitments’ to the Ukrainian people truly are.”

Shadow minister for international trade, Gareth Thomas MP, who represents Labour from Harrow West in north London, told Eastern Eye, “We stand shoulder to shoulder with Ukrainians here in London and all over the world.

“Putin’s unprovoked attack on Ukraine is a repugnant violation of international law.

“It is right that our NATO allies implement the hardest possible sanctions against Putin’s regime and must also work to persuade other powers, such as China, to withdraw support for Putin.

“At home this conflict will cause further inflationary pressures and the government should scrap the NICs (national insurance contribution) rise, which will hit working people and businesses at the worst possible time.”

Britain on Tuesday warned that Putin and his commanders in Ukraine could face prosecution for war crimes.

Prime minister Boris Johnson said Russia’s bombardment of Kharkiv was “absolutely sickening” and reminiscent of massacres of civilians in Sarajevo in the 1990s, vowing that Western sanctions would remain “for as long as it takes”.

On Tuesday, the central square of the city near the Russian border was shelled by advancing forces who hit the building of the local administration, regional governor Oleg Sinegubov said.

Prior to Russia’s invasion there were around 20,000 Indians in Ukraine. Around 8,000 have since managed to leave the country, of whom some 1,400 have been flown back to India, according to officials.

Students from south Asia are among several foreign undergraduates pursuing courses in Ukraine universities, where fees can be more affordable than in many Indian private universities.

Before the conflict began, Indians made up around a quarter of the 76,000 foreign students in Ukraine, by far the largest number, according to Ukrainian government data.

The Indian government asked Indian pharmaceutical companies with operations in Ukraine and neighbouring countries to help the students with food, shelter and logistics, including facilitating their movement to border areas, a source said.

An Indian team has been positioned in Belgorod, a Russian city about 70 km (45 miles) away close to the Ukrainian border, but it has been unable to evacuate citizens because of the fighting, the source added.

Indian media reports said some Indian students were allegedly being prevented from crossing into neighbouring countries, with border guards reportedly refusing to let them pass and demanding money.

A medical student who returned home from Ukraine to Guna in the central Indian state of Madhya Pradesh, earlier this week claimed that Ukrainian guards beat up Indian students who were fleeing the war zone.

Shruti Nayak, a third year student of medicine at Ivano National Medical University, reached her home after being evacuated by an Air India flight.

“Ukrainian guards were harassing Indian students who were fleeing the war zone and even beating them up,” she told reporters.

Nayak travelled 400 km on a bus to reach Romania on February 26 and the government there helped Indian students, she said.

Videos of a purported security officer hitting a student went viral on social media last weekend as stranded students tried to reach Ukraine’s western borders after Russia launched its invasion of the country.

“I was standing near the Ukrainian border, awaiting my turn to enter Romania when I saw a few guards point guns at Indian students and start abusing them in their language,” The Times of India quoted one student as saying.

“Students, who were already scared, started screaming in terror.”

The Hindustan Times quoted Ishika Sarkar, a student in eastern Ukraine, saying in a video that Indians in the area were in bunkers and running short of food.

“(We) have been asked to reach the western border, which is impossible for us because the connecting bridges have been blown up due to bombardment… but we are not getting any kind of help in Ukraine,” he said.

Aruj Raj, a student in Kharkiv, told the paper he was in a hostel bunker with 400 other Indian students since last Thursday (24).

“There is so much bombing happening outside. We can see street fighting through our windows. The city is still under curfew. It is impossible for us to step outside. We hardly have anything left to eat or drink,” he said.

President of the European Council Charles Michel spoke to Modi and conveyed his condolences. He added that European countries were helping in the evacuation of Indian citizens from Ukraine.

Separately, Pakistan’s ambassador to Ukraine told the Pakistan Observer that the evacuation of students and citizens stuck in Ukraine was almost completed, and would wound up by Wednesday (2), after Eastern Eye went to print.

In total, about 470,000 foreign nationals are stranded in Ukraine, including students and migrant workers, the UN migration agency said, urging neighbouring countries to grant them refuge if they try to flee.

An ally of Russia, India has not condemned Moscow’s invasion of Ukraine, instead calling for both sides to cease violence.

Late last Sunday (27) night, India’s embassy in Poland issued an advisory, saying it had arranged for buses at the Shehyni border in Ukraine, for those stranded there, to cross over into Poland.

Fears of being caught up in the fighting, long traffic jams and severe weather meant students were reluctant to heed the Indian government’s suggestion they make their own arrangements to reach the border with Poland, Romania or Slovakia, Reuters reported last Friday (25).

Russia said its assault from the north, east and south of Ukraine is not aimed at occupying territory, calling it a special operation to demilitarise and “denazify” the country – a justification dismissed by Kyiv and the West as war propaganda.

Kremlin spokesperson Dmitry Peskov on Tuesday dismissed allegations of Russian strikes on civilian targets and said reports of the use of cluster and vacuum bombs were fake. He categorically denied that Russia had committed war crimes.

(With additional reporting by Sophie Wallace and agencies)