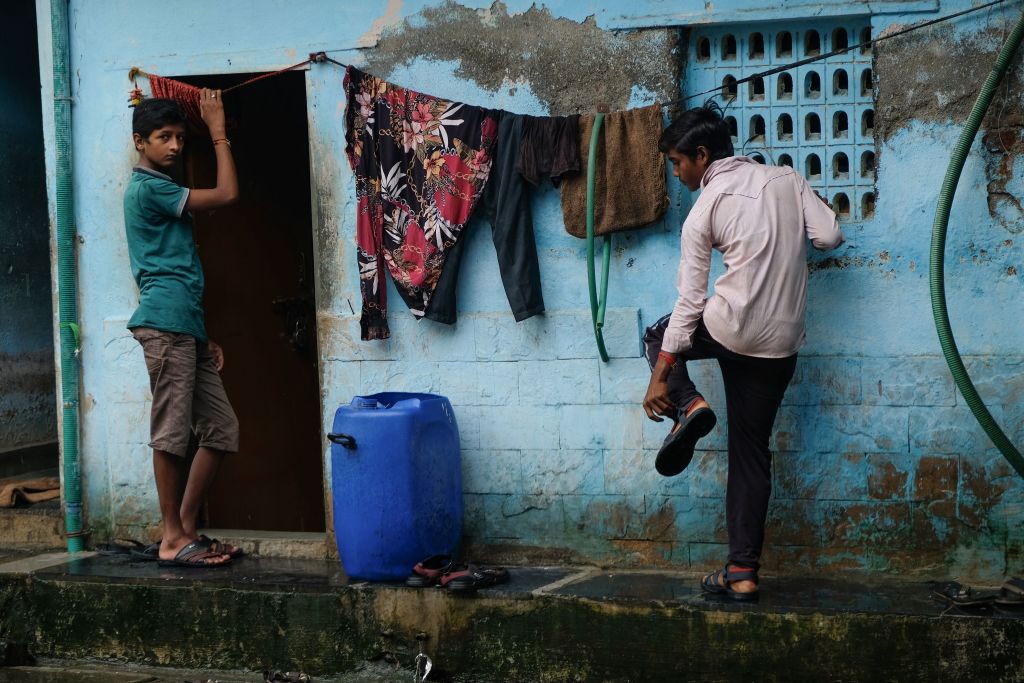 FILE PHOTO: A young boy looks on as another puts his shoes on in the low-income neighborhood of Dharavi in Mumbai (Photo by Noemi CASSANELLI / AFP) (Photo credit should read NOEMI CASSANELLI/AFP via Getty Images)

INDIAN police barricaded parts of one of Asia’s biggest slums on Friday (3) after two coronavirus deaths in the area.

India has so far reported 2,300 infections and 56 deaths. The two fatalities and a third infection in the Dharavi neighbourhood of Mumbai have set alarm bells ringing.

Authorities have set up eight “containment zones” in the area, which homes a million people living and working in cramped tin-roofed shanties, flats and small factories.

“We have home-quarantined people from these buildings and cordoned off the area so people can’t enter them, and enforced social distancing,” said Vijay Khabale-Patil, spokesman of Mumbai’s city authority.

“We sprayed hydrochloric acid to disinfect these buildings and nearby areas as well… People from Dharavi are following the rules and keeping themselves and their kids inside homes.”

Police on Friday were not letting anyone in or out of the cordoned areas.

The first death from coronavirus in Dharavi, on Wednesday, was a 56-year-old man with no travel history or contact with anyone known to be infected, although he previously had a renal complaint, officials said.

The second fatality — a 51-year-old sanitation worker living in a different area of Mumbai, but who worked in Dharavi — died in hospital on Thursday.

The third case is a doctor who lived and worked in the neighbourhood, who on Friday was receiving treatment.

Experts say the coronavirus could spread like wildfire in slums where social distancing and self-isolation are all but impossible.

Dharavi’s population density is thought to be 270,000 per square kilometre, according to the World Economic Forum.