India and Australia sign military base and cyber accords 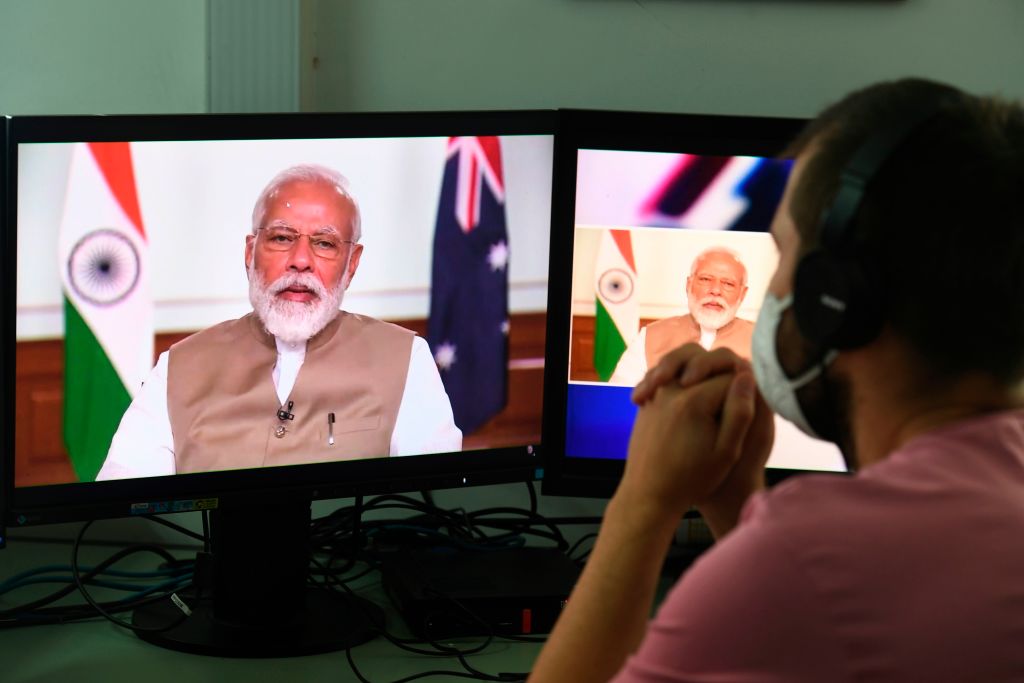 A man wearing a facemasks watches on a monitor Indian Prime Minister Narendra Modi speak during a bilateral virtual summit with Australian Prime Minister Scott Morrison, at an office in New Delhi on June 4, 2020. – (Photo by PRAKASH SINGH/AFP via Getty Images)

INDIA and Australia sealed an accord on Thursday (4) to grant access to each other’s military bases in order to facilitate mutual defence exchanges and exercises.

The agreement – known as the Mutual Logistics Support Agreement – was reached during a virtual summit between Indian prime minister Narendra Modi and Australia’s premier Scott Morrison.

“We share democratic values, the rule of law, freedoms, and respect for international institutions. When these are being challenged, we need to strengthen our cooperation,” India’s Modi said in opening remarks.

“It is time for our relationship to grow broader and deeper,” Morrison told Modi.

The accord allows military ships and aircraft to refuel and access maintenance facilities, and is widely seen as being part of a broader strategy by democracies in the region to counter communist-led China’s military and economic weight.

Indian troops are locked in a standoff with Chinese troops on their disputed border high in the Himalayas.

Though no shots have been fired, the confrontation on the frontier is the most serious in years, and comes at a time when India is increasingly concerned by its huge trade deficit with China, and Beijing’s rapidly expanding footprint in South Asia through its Belt and Road initiative.

Although China is the biggest buyer of Australia’s exports, there have been trade frictions between the two recently. And Australia also raised China’s hackles by pushing for an international review into the origins and spread of the novel coronavirus, which first emerged in the central Chinese city of Wuhan late last year.

Morrison was forced to cancel a visit to India in January due to the bushfires crisis at home, and with the ongoing pandemic the two leaders opted to hold a virtual summit instead.

Accords were also struck to enhance cooperation on cyber and related technologies.

There was no word on whether Australia would join India later this year in annual naval exercises held with the United States and Japan in the Indian and Pacific Ocean.

China voiced its anger the last time Australia participated, back in 2007.