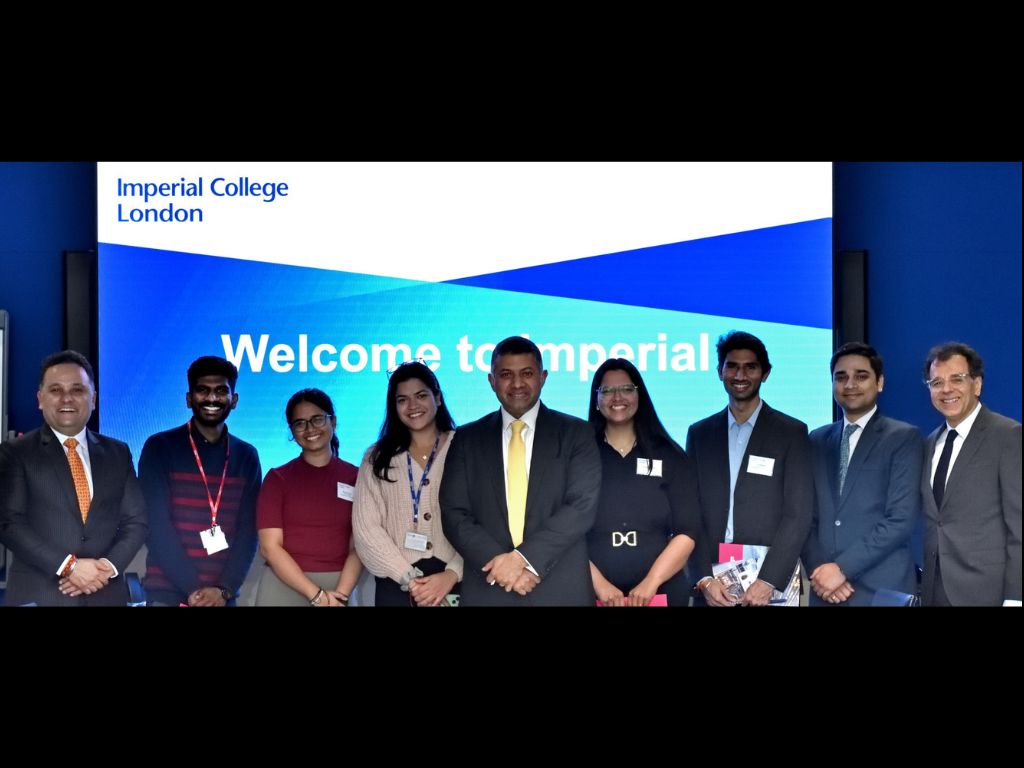 The Imperial College London on Tuesday (10) welcomed the Indian high commissioner to the UK, His Excellency Vikram Doraiswami, to discuss deepening ties between the UK and India.

The College has been growing research connections with the South Asian nation in fields such as sustainability, public health, and water management.

The Indian diplomat met students and academics at the College during his visit and learned about some of the most inspiring projects that are currently underway with partners in India and how the institution is bolstering ties across research, education, and innovation, the Imperial said.

Hugh Brady, president of Imperial, welcomed HE Doraiswami the College and reiterated the College’s ambitions for having deeper ties with India.

The high commissioner was accompanied by Amish Tripathi, the minister for education and culture at the High Commission of India and Shashi Bushan, second secretary.

The high-profile visitors met with Imperial academics, including Professor Ajit Lalvani, from the National Heart & Lung Institute, and several Indian students studying at the College.

Professor James Durant from the department of chemistry introduced HE Doraiswami to Imperial’s Transition to Zero Pollution initiative, which looks to inspire fundamental changes in areas such as exploitation of resources; ways of production of food and energy; and will help in mitigating the effect of air pollution on public health.

Building on the programme, academics in Imperial Faculty of Natural Sciences have started working with partners at the Indian Institute of Science in Bengaluru to continue to explore battery devices for renewable power.

Imperial’s School of Public Health has been working with the Indian Council of Medical Research (ICMR) in support of the Asian nation’s Covid-19 response.

Academics from the Jameel Institute, including Professor Katharina Hauck and Professor Nimalan Arinaminpathy, have helped scientists at the Indian Council of Medical Research (ICMR) to carry out modelling analysis to address key questions that the country’s public health authorities have faced.

For example, early in India’s vaccination drive against the virus – the largest in the world – Imperial collaborated with ICMR to provide modelling analysis to help in the prioritisation of risk groups.

Besides, Professor Arinaminpathy team’s research has a major focus on the control of human tuberculosis (TB) in high-burden countries and they work closely with India’s National Tuberculosis Elimination Programme, helping with mathematical models to inform intervention planning to meet India’s ambitious goals for the elimination of TB.

They are also working with partners, including Indian Institute of Technology Bombay, the health ministry, and the Gates Foundation on a new partnership for TB modelling training.

Imperial said that In the last five years, its academics co-authored over 1,200 research publications with partners at over 300 institutions in India.

Presently, there are 700 Indian students at the College, while in India, there is a community of over 3,000 alumni.

In 2022, Imperial formalised its longstanding connections with the Indian Institute of Science through a joint research and education seed fund.