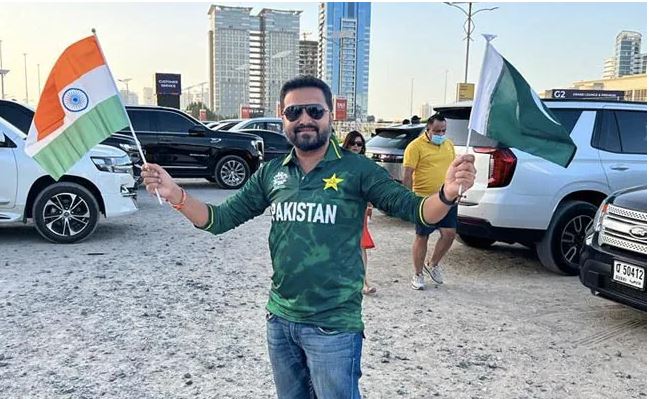 An Indian cricket fan from Uttar Pradesh who received death threats for wearing a Pakistan jersey during the India-Pakistan in Dubai has said that he wore it as the Indian the jersey was sold out by the time he reached the stadium.

Sanyam Jaiswal, 42, had travelled all the way from Bareilly to UAE to watch the match.

“I am the supporter of the Indian cricket team and was vouching for Men in Blue throughout the match. I travelled from India just to extend my support to our boys but by the time I reached the stadium, Indian jersey was sold out. I thought of wearing Pakistan jersey and tease Pakistan cricket fans,” he told local media.

His idea was to tease Pakistani fans by shouting Hindustan zindabad while wearing their colours.

Pictures of Jaiswal dressed in Pakistan jersey with India and Pak flags in either hand went viral. Later, is family, which runs a liquor and real estate business, got several threat calls.

Jaiswal also shared a video in which he gets into an argument with a Pakistani fan asking him why he is supporting India.

He said that he shared the pictures with just his friends. Jaiswal is now disappointed that they were shared on social media without his consent. Some people are now demanding action against him.

“The incident happened in Dubai, which is outside our country and thus outside our jurisdiction. Therefore, no FIR can be registered on the basis of complaints on Twitter,” said SSP (Bareilly) Satyartha Aniruddha Pankaj.

India and Pakistan clashed on August 28, with the Men in Blue emerged victorious by five wickets.

India confirmed their Super 4 berth on Wednesday (31), after beating Hong Kong by 40 runs in the Asia Cup 2022.