I want to change UK-India relationship to make it more two-way: Rishi Sunak 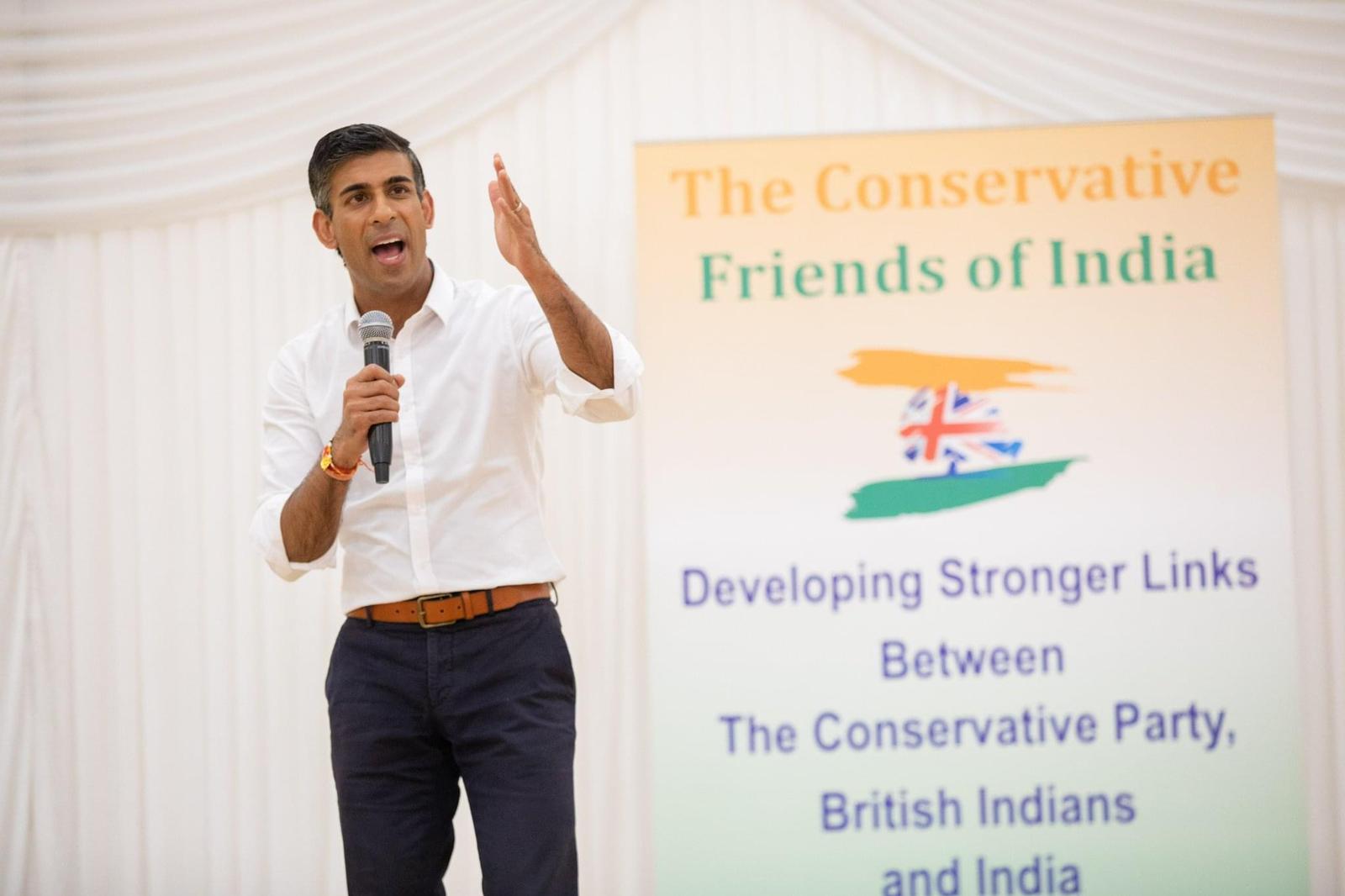 Britain’s prime ministerial candidate Rishi Sunak has said he wants to change the UK-India relationship to make it a more two-way exchange that opens up easy access to UK students and companies in India.

Addressing a gathering of British Indian Conservative Party members who are voting in the election to choose between him and Foreign Secretary Liz Truss, the 42-year-old UK-born Indian-origin Tory MP for Richmond in Yorkshire vowed to get the country through the difficult times of inflation and build a better, safer Britain.

A majority in the cheering crowd were categorical that Sunak’s Indian heritage and ethnic minority background had no part to play in the contest to succeed Boris Johnson as the Conservative Party leader and British Prime Minister.

“This country is not racist. For Rishi to reach this stage, it proves that merit is valued,” said Lord Dolar Popat, a veteran Tory peer.

During the campaign hustings event hosted by the Conservative Friends of India (CFIN) diaspora organisation in north London on Monday evening, the former Chancellor greeted the gathering with a mix of traditional greetings such as namaste, salaam, khem cho and kidda and even broke into Hindi: aap sab mere parivar ho (you all are my family)”.

We know the UK-India relationship is important. We represent the living bridge between our two countries, he said, in response to a question about bilateral ties from CFIN co-chair Reena Ranger.

We are all very aware of the opportunity for the UK to sell things and do things in India, but actually, we need to look at that relationship differently because there is an enormous amount that we here in the UK can learn from India.

On China, the former minister reiterated his stand on the need to be very robust in defending the UK against Beijing’s aggressiveness.

China and the Chinese Communist Party represent the biggest threat to our economy and thereby national security that this country has faced in a long time and we need to be alive to that, he said.

Be in no doubt, as your Prime Minister I will do whatever it takes to keep you, your families and our country safe because that’s the first duty of a Conservative Prime Minister, he said.

After a grand entry at the Dhamecha Lohana Centre in Harrow to dhol beats and loud cheers, the former minister spoke briefly and then spent hours interacting with hundreds of Tory members who queued up to shake hands with him.

He was showered with blessings by the elderly in the crowd, patted on the back by others and eight-year-old Tanish Sahu got a special picture as Sunak carried him in his arms.

Amita Mishra, Trustee of Shree Jagannatha Society UK, handed over a set of gold-plated deities all the way from India.

We are working on creating a Jagannath Temple in London and this gift is a special blessing all the way from India, said Mishra, who was accompanied by a pandit who performed a victory shloka from the Bhagavad Gita’ as the deities were handed over to Sunak on stage.

In complete contrast, a British Sikh Tory member in the crowd waited hours to get a special bottle of Jack Daniels whisky signed by Sunak despite both him and the former Chancellor being teetotalers.

“I don’t drink but this is a special gift I received on my birthday and now with this signature, it has become historic,” he said

In this gathering, Sunak’s self-proclaimed underdog status as the candidate trailing in all the polls seemed irrelevant as he glided through the crowds rockstar-like and responded to comments of see you at No. 10 Downing Street with an emphatic: “That’s the plan, I’m giving it everything I got.”

The majority in the room admitted they had already cast their online ballots in favour of Sunak and had come along to this latest hustings just to hear him out one more time.

One sceptical British Indian investment banker said he was still undecided as he did not entirely favour Sunak’s handling of the Bounce Back Loan scheme introduced in the wake of the COVID-19 lockdowns, which have been “abused” by many. But even he admitted that his vote might go to Sunak in the end as he wasn’t entirely convinced by leadership rival Truss.

On the key dividing line in the leadership contest between the two finalists, Sunak reiterated that his opponent’s plan would end up in a moral failure of a Conservative government to let struggling households fall into destitution over the tough autumn and winter months of spiralling energy costs ahead.