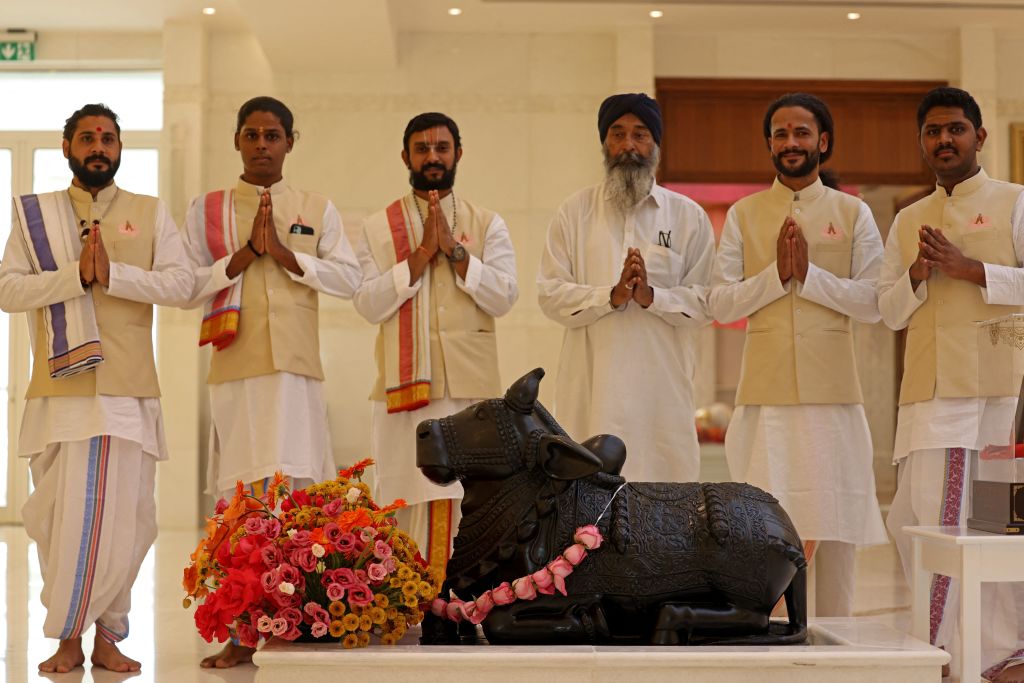 Priests pose for a group picture at the newly-inaugurated Hindu temple in Dubai’s Jebel Ali neighbourhood on October 4, 2022, providing a place of worship and support network for the large Indian community. (Photo by KARIM SAHIB / AFP) (Photo by KARIM SAHIB/AFP via Getty Images)

The newly inaugurated Hindu temple in Dubai has 16 different deities, a community centre for hosting several events and activities, and an outreach programme platform which is yet to open, according to the trustee of the temple.

A decade-long Indian dream of a Hindu temple in the Jebel Ali area was fulfilled on Tuesday after UAE’s Minister of Tolerance Sheikh Nahyan bin Mubarak Al Nahyan launched a new Hindu temple. “Today is the official inauguration of the Hindu temple in Dubai. We are now part of the worship village,” Raju Shroff, trustee of the Hindu Temple said yesterday.

He informed that the idea behind the community centre in Dubai’s worship village is to congregate people and make them feel at home.

“We have created both, a place of worship with 16 different deities with North, South and East, West India so that everybody from all parts of Hinduism can come and visit us. We also have a community centre which will host community events and activities – religious activities, personal events, ceremonies, and birthdays. The idea is to congregate people and make them feel at home in Dubai,” said Shroff, who is also a member of the managing committee.

“The idea to have a temple is not only for the place of worship but also to become a knowledge centre and also an outreach programme platform. We will be doing that in January, once the temple is stabilized and settled. A lot of people are coming through the temple once we are stable we are opening the centre which will teach languages, arts culture to various people who would like to come and participate, run by volunteers for the community. And we will have an outreach programme to help the underprivileged by the community members,” he added.

The temple was inaugurated a day ahead of the Dussehra festival and the temple is an extension of the Sindhi Guru Darbar Temple, one of the oldest Hindu temples in the UAE. The temple’s foundation was laid in February 2020.