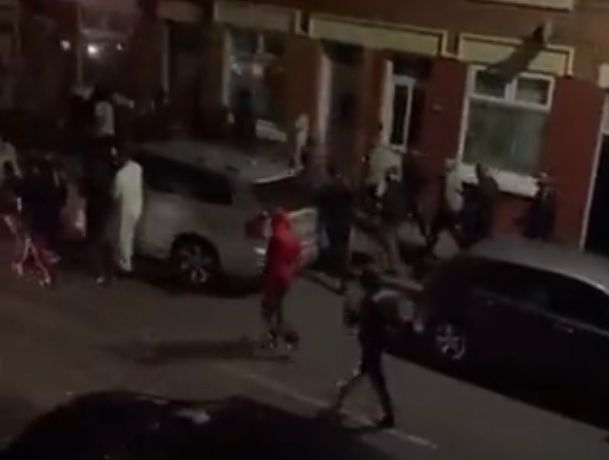 In a horrifying incident, gangs of youths — described by locals as Pakistani-origin Muslims — were seen vandalising and terrorising Hindus in the UK’s Leicester City to take revenge for a few Indian fans allegedly chanting anti-Pakistan slogans following India’s victory over Pakistan in the Asia Cup cricket match on August 28, 2022.

A police investigation is underway into hate crimes after violence and racist chanting in a predominantly Indian area of Leicester.

In a tweet, the East Leicester Police team earlier said: “An investigation is underway to identify those responsible.

“We are treating this chanting as a hate crime and anyone found to have been taking part will be dealt with accordingly.”

However, various videos and reports have been circulating on social media about further attacks following last weekend’s incident.

On Monday and Tuesday, large gangs of youths wandered around predominantly Hindu neighbourhoods.

“Gangs running riot and escalating attacks on Hindus. Innocent Hindus have been terrorized in their own properties, there have been attempts to stab and there has been rampant vandalism of Hindu properties,” Rashami Samant, a human rights activist tweeted.

Faith leaders and police have called for an end to days of violence and disorder as a “small minority” of people try to fan the flames of community tension in Leicester.

Inspector Yakub Ismail, commander for the East Leicester police, said the police were working to ensure such things did not happen again. He said, “Our officers are there to protect our communities and we take a zero-tolerance approach to them being assaulted in their line of duty. In the days following the match, the police organised special patrols in the area.

Leicester Police said on Wednesday that officers would continue to carry out “proactive patrols” and investigators would speak with witnesses and make CCTV enquiries.