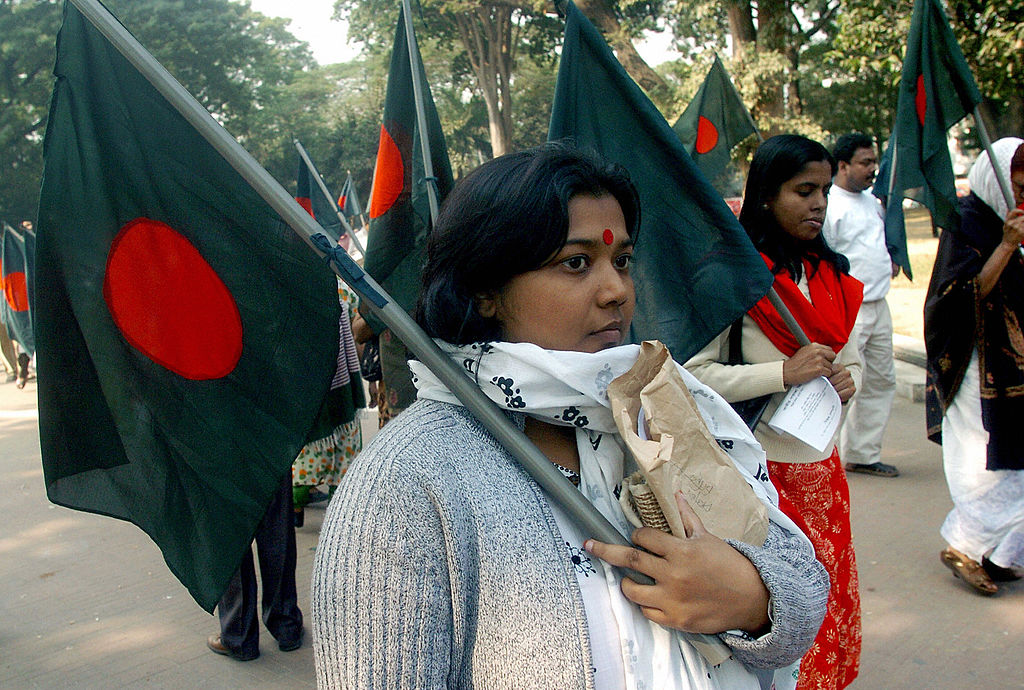 Bangladeshi activists from the ‘Agitated Countrymen’ organisation carry flags as they take part in a protest march in Dhaka on December 30, 2005 against a series of nationwide bomb blasts. (Photo by SHAFIQ ALAM/AFP via Getty Images)

BANGLADESH has executed a hardline Islamist for a 2005 bomb attack in which eight people died, officials said on Friday (16).

Ponir was found guilty in 2008 of organising the bombing of Udichi Shilphi Goshti, a secular cultural group in the northeastern district of Netrokona. An alleged suicide bomber was among the dead.

Ponir was a member of Jamayetul Mujahideen Bangladesh (JMB), a radical group which, authorities said, staged a series of attacks in 2005 on courts, administrative offices, Sufi Muslim shrines and cultural groups.

The group was founded in the 1990s by militants who had fought in Afghanistan before, vowing to establish Islamic Sharia rule in Bangladesh.

Gias Uddin said Ponir had exhausted all his appeals, with his death sentence upheld by the supreme court and president Abdul Hamid rejecting a clemency appeal last month.

Six JMB leaders, including its supreme leader Shaikh Abdur Rahman, were hanged in 2007.

A JMB offshoot, reportedly linked to Daesh (the Islamic State group), has emerged in recent years and was blamed for deadly attacks on foreigners, atheists and LGBT activists between 2013 and 2016.


Five members of the splinter group attacked a Dhaka cafe in 2016, killing at least 22 people, including 17 foreigners.

Prime minister Sheikh Hasina’s government has since cracked down on suspected extremists, with more than 100 killed in raids since 2016.

Several people are executed each year in Bangladesh, where the death penalty has popular support and even secular activists have called for it to be used in cases of brutal rapes.

At least 2,000 convicts are on death row, according to the New Age newspaper.