Gujarat tragedy: What is a suspension bridge? What possibly led to Morbi bridge collapse? 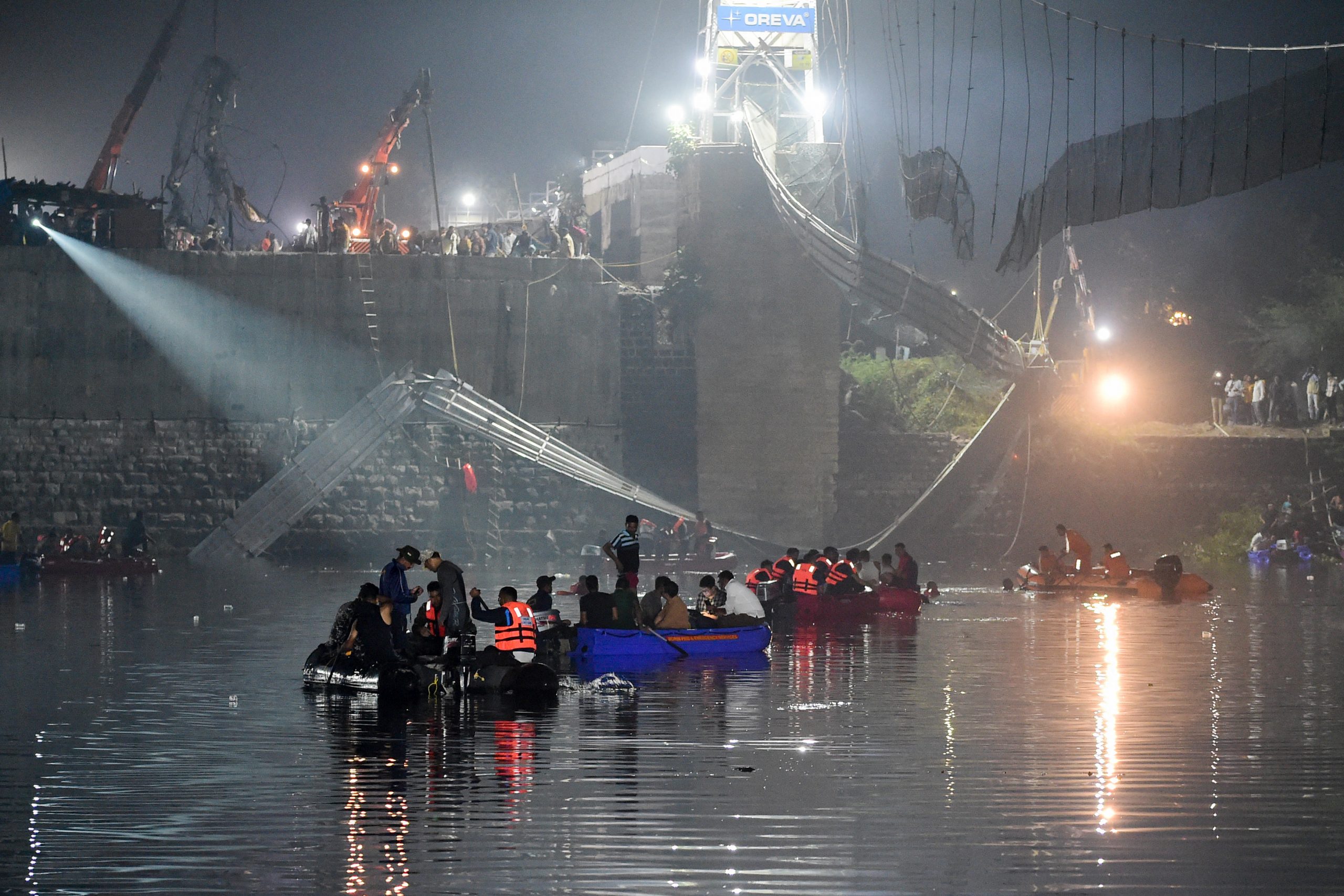 What is a suspension bridge? How does it transfer the load to the ground? Those were questions on the minds of many on Monday, a day after a century-old suspension bridge in Gujarat’s Morbi over the Machchhu river collapsed, leaving at least 134 people dead.

Just before the bridge collapsed, CCTV footage showed, some men were trying to rock the suspension bridge from one side to another.

“The deck of the suspension bridge, which bears the weight of the people walking on it in addition to its own weight, is held in place by the means of vertical suspenders which are made from ductile material and subjected to tension,” he said.

“These suspenders are then connected to the main cable which is also ductile and subjected to tension.

“The main cable, which spans between the points connected by the bridge and is intermediately supported by vertical main column piers, has two functions. The first is to support the vertical suspenders and the second is to maintain the verticality of the piers,” he said.

Overall, the weight of the deck, including the traffic of people, is transferred to the ground through the vertical piers, which are in compression, explained Sarkar.

So, at what points is such a type of bridge the most vulnerable? Quite a few, it turns out.

“To begin with, the main cable, suspenders and the points at which the suspenders connect to the bridge deck are all vulnerable to failure,” Sarkar said.

“In fact, the main cable requires the most attention in terms of regular checks and maintenance over the service period of the bridge. The reason for this being the fatigue load that it is continuously subjected to during its service,” he said.

Fatigue load refers to continuously subjecting a material to some force until it develops a crack.

Referring to the suspension bridge in Morbi, Sarkar said its cables are of a highly ductile material and should have stayed in place much longer, despite the kind of deflection being deliberately created by the people seen in the video (CCTV footage).

“Also, the bridge that failed was recently renovated, so fatigue failure can be safely ruled out as a possible cause,” observed Sarkar.

So then what was it that gave way? The connection points where the vertical suspenders meet the deck of the bridge are next in line to warrant attention, the structural engineer said.

“It is through these points that the loads of the deck and people are together transferred to the suspenders. The suspenders, in turn, transfer the loads to the main cable,” he elaborated.

“As I understand it, the dynamic loading created by the synchronous and deliberate movements of the people on the bridge created excessive deflection from the point of view of the joint of the suspender to the bridge deck,” he added.

On the transmission of forces to the ground, Sarkar further said that the main cables are in slope and so the tension in the cable at the pier junction has a horizontal and a vertical component.

“While the horizontal component of this force is catered to by the cables anchored at the two ends through tension, the vertical component creates a compression in the pier,” he said.

“Failure occurs when the structural integrity at any of these points described is compromised,” he concluded.