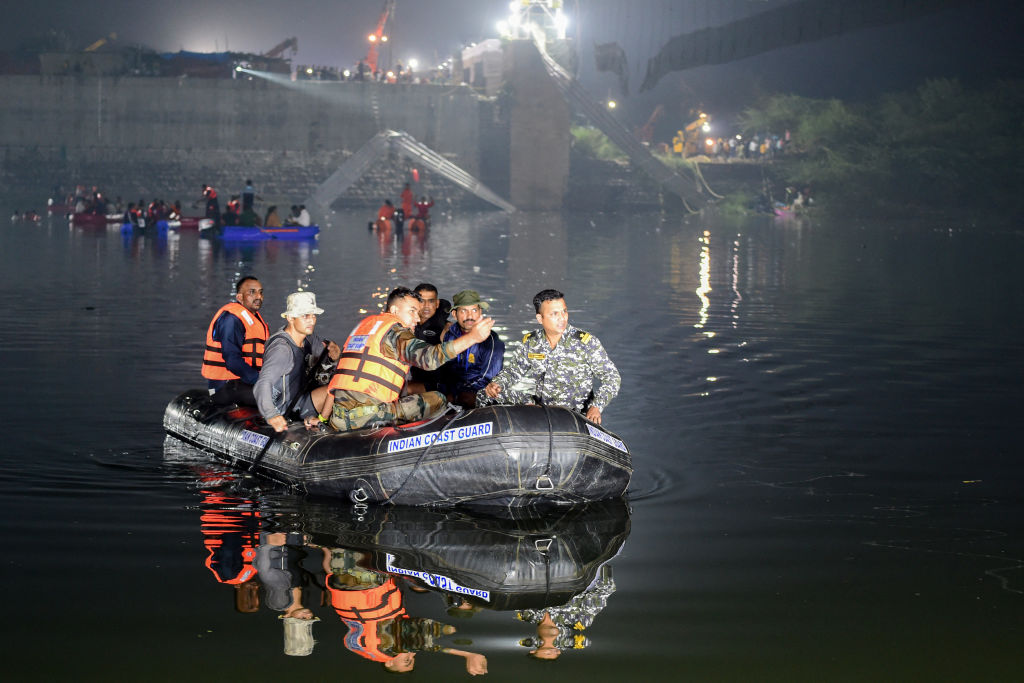 TOPSHOT – Indian rescue personnel conduct search operations after a bridge across the river Machchhu collapsed in Morbi, some 220 kms from Ahmedabad, early on October 31, 2022. – At least 75 people were killed on on October 30 in India after an almost 150-year-old colonial-era pedestrian bridge collapsed, sending scores of people tumbling into the river below. (Photo by SAM PANTHAKY / AFP) (Photo by SAM PANTHAKY/AFP via Getty Images)

As many as 135 people have been killed in the Morbi bridge collapse tragedy and 170 others rescued, Gujarat minister Rajendra Trivedi said on Tuesday.

The rescue operation is still on in the Machchhu river by the armed forces, the National Disaster Response Force (NDRF) and other agencies, officials said.

On Tuesday, Gujarat cabinet minister Trivedi said, “So far, rescue teams have recovered 135 bodies while nearly 170 people, who fell into the river, were rescued alive.”

“The kin of all the deceased have already been paid a compensation of Rs 4 lakh each as announced by the Gujarat government. A compensation of Rs 2 lakh announced by Prime Minister Narendra Modi will be deposited soon into their bank accounts through DBT (direct bank transfer),” the minister told reporters in state capital Gandhinagar.

He said only 17 people, out of those rescued after the accident, were at present under treatment at various hospitals in Morbi.

IG Yadav on Monday said though no person remained missing on record as of now according to police, the search operation continued with the help of the Indian Army, Navy, NDRF, SDRF as well as local fire and police personnel

Local divers were also roped in by authorities to scan the deep river waters, he said.

PM Modi will visit Morbi on Tuesday to meet the injured persons at the Morbi Civil Hospital. He is also likely to visit the bridge to understand how the tragedy unfolded, according to officials.

Police have so far arrested nine persons, including four from the Morbi-based Oreva Group that was managing the suspension bridge, and filed a case against firms tasked with the maintenance and operation of the British-era structure.

The clock and e-bike maker Oreva group was given a contract by the Morbi Municipality to repair and operate the ill-fated hanging bridge for 15 years and charge tickets in the range of Rs 10 to Rs 15 for its use, as per documents of the municipality.