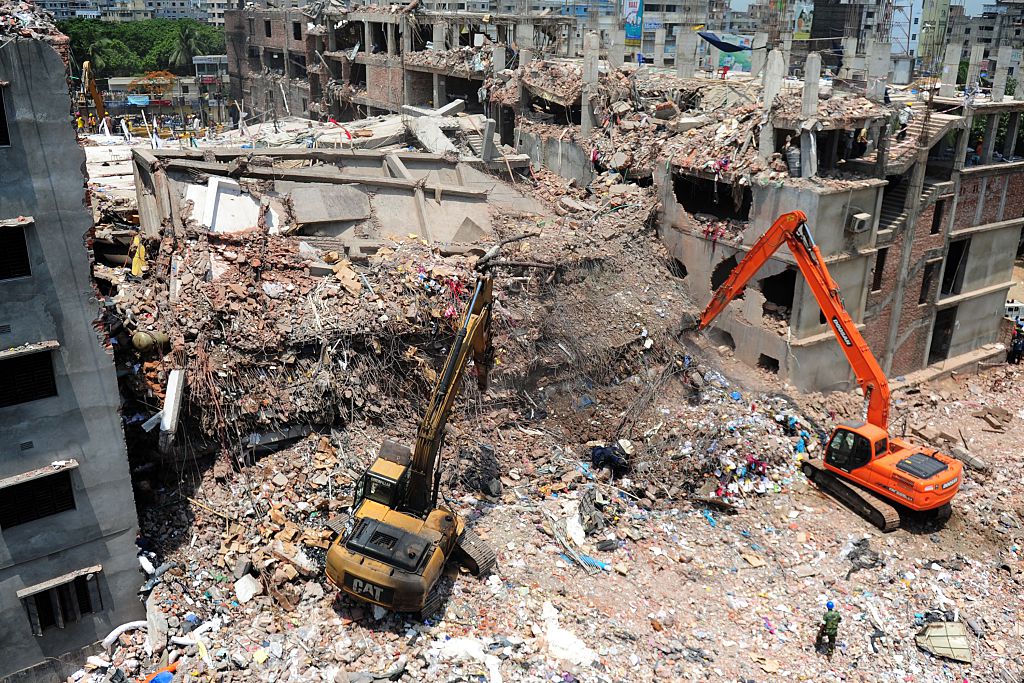 (FILES) In this photograph taken on May 3, 2013, Bangladeshi rescuers use diggers to move debris as Bangladeshi Army personel continue the second phase after the Rana Plaza building collapse in Savar, on the outskirts of Dhaka. (Photo by MUNIR UZ ZAMAN/AFP via Getty Images)

A fire that ripped through a New Delhi factory on Sunday and killed at least 43 workers has highlighted the perils of manual labour in South Asia.

The blaze at a building in India’s capital housing workers making school bags and toys was blamed by campaigners on a lack of workplace safety.

A factory-built on swampy ground near Bangladesh‘s capital Dhaka collapsed in early 2013, killing over 1,000 people, most of them women producing clothes for Western labels.

Workers had previously complained about cracks in the eight-storey building.

It was the garment industry’s deadliest recorded incident and put pressure on global brands to improve factory conditions and sign an accord on worker safety.

On Sept. 11, 2012, nearly 300 people burned to death in a fire at a garment factory in Pakistan’s commercial capital of Karachi. According to investigations, emergency exits were blocked. On the same day, a fire at a shoe factory in Lahore city killed 25.

A fire that tore through a garment factory on the outskirts of Dhaka in late 2012 killed 112 mostly women workers.

Survivors said the owner added a new floor to the building and ignored advice to stop construction after cracks appeared in the building following a 7.5 magnitude earthquake.

A fire that started in an unlicensed Indian factory producing fireworks in 2012 turned into a raging inferno, killing about 40 people.

It was the latest in a string of accidents in a town in the southern state of Tamil Nadu known as India’s fireworks capital.

A blaze at a food and cigarette packing factory in Dhaka in 2016 highlighted risks for workers three years after safety measures were introduced following the Rana Plaza disaster.

Thirty-nine people perished. A month earlier, more than 100 people fell ill after inhaling gas that leaked from a fertilizer factory in the southern port town of Chittagong.

On the night of Dec. 2, 1984, a pesticide factory owned by the U.S. multinational Union Carbide Corp leaked cyanide gas into the air, killing thousands of largely poor Indians in the central city of Bhopal.

The government recorded 5,295 deaths in what is considered one of the world’s worst industrial disasters. Activists estimate 25,000 people died in the aftermath.

A boiler that exploded in a garment factory near Dhaka in 2017 deepened concerns about deadly mishaps in the world’s second-largest garment producer.

It prompted fresh calls for more effective implementation of regulations put in place after the Rana Plaza collapse.

A Sri Lankan worker at a rubber factory fell into a tank of ammonia in 2018 and perished along with four others who tried to save him.

Workers complained that there were no safety measures or warning systems in the plant.

About 100,000 people were left without safe drinking water in Male, capital of the Maldives, after a fire broke out at the country’s sole sewage treatment plant.