Gas leak from chemical plant kills 11 in India; over 1,000 affected 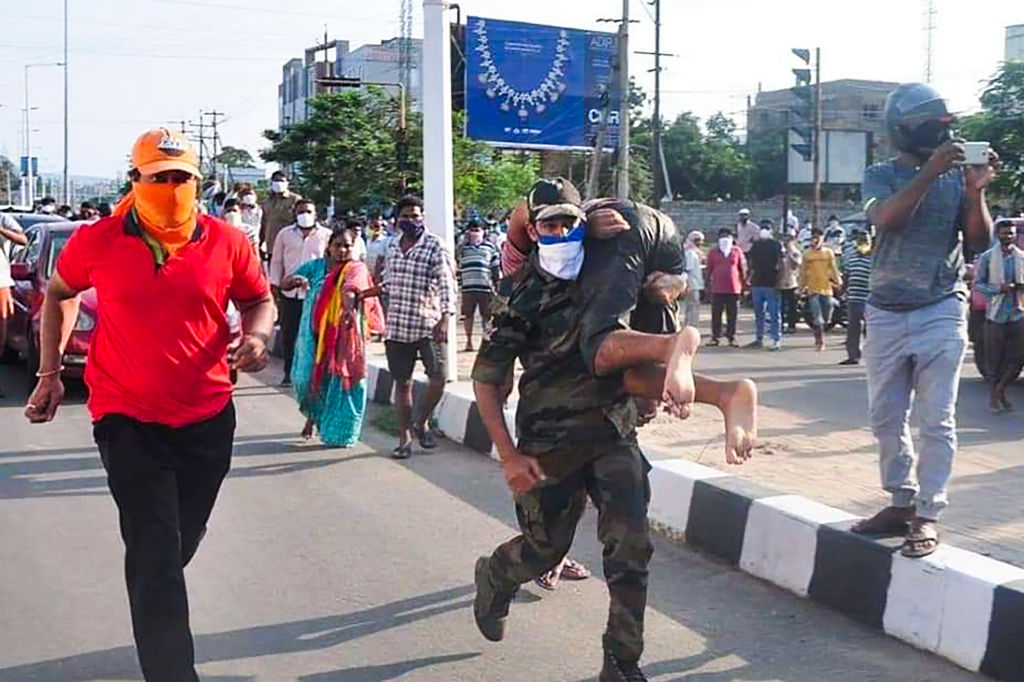 FILE PHOTO: Rescuers evacuate people following a gas leak incident at an LG Polymers plant in Visakhapatnam on May 7, 2020. (Photo by -/AFP via Getty Images)

Gas leaked from a chemical plant in Visakhapatnam in South India in the early hours of Thursday (7) killed at least 11 people and impacting over 1,000. Among the dead was a child and two people who fell into a borewell while fleeing the vapours from the plant, getting ready to reopen after the lockdown.

The death toll could go up with at least 20 people on ventilator support. Besides, 246 people with health complications are undergoing treatment at  Visakhapatnam’s King George Hospital, police said.  About 800 people in ground zero, R R Venkatapuram village in Gopalapatnam, were evacuated and most needed only first aid.

The styrene gas from the multinational LG Polymers quickly spread to villages in a five-kilometre radius, many collapsing to the ground as they tried to escape the toxic vapours.

Taking stock of the situation, prime minister Narendra Modi said he had spoken to officials of the ministry of home affairs and the National Disaster Management Authority (NDMA).

“I pray for everyone’s safety and well-being in Visakhapatnam,” Modi said in a tweet.

The gas leak took place as the plastic factory that was closed during the  lockdown  was being prepared for resumption of operations, he said.

Andhra Pradesh chief minister Y S Jaganmohan Reddy has ordered a probe into the matter, state Director General of Police D Gautam Sawang said.  “How the gas leaked and why the neutraliser at the plant did not prove effective in containing the leak will all be investigated. Styrene, though, is not a poisonous gas and can be fatal only if inhaled in excess quantity,” Sawang said.

The chief minister also announced Rs 10 million each as relief to kin of people killed.  Styrene, a chemical used to make synthetic rubber and resins, affects the central nervous system, throat, skin, eyes and some other parts of the body.

Hundreds of villagers, most of them children, suffered from irritation in their eyes, breathlessness, nausea and rashes. Cattle and birds were also knocked unconscious by the gas leak.

The Greater Visakhapatnam Municipal Corporation put out an advisory on Twitter, asking people to wear a wet cloth or mask, eat banana and jaggery and drink milk to neutralise the effects of the gas.

LG Chem, which operates the plant, said it is cooperating with Indian authorities to help residents and employees.      “The gas leakage is now under control, but the leaked gas can cause nausea and dizziness, so we are investing every effort to ensure proper treatment is provided swiftly,” LG Chem said in a statement.

“We are investigating the extent of damage and the exact cause of the leak and deaths”.

The accident impacted the movement of trains from Visakhapatnam, including at least nine Shramik Special Trains taking migrants to various places .