From Baikonur to Borat: 5 things to know about Kazakhstan 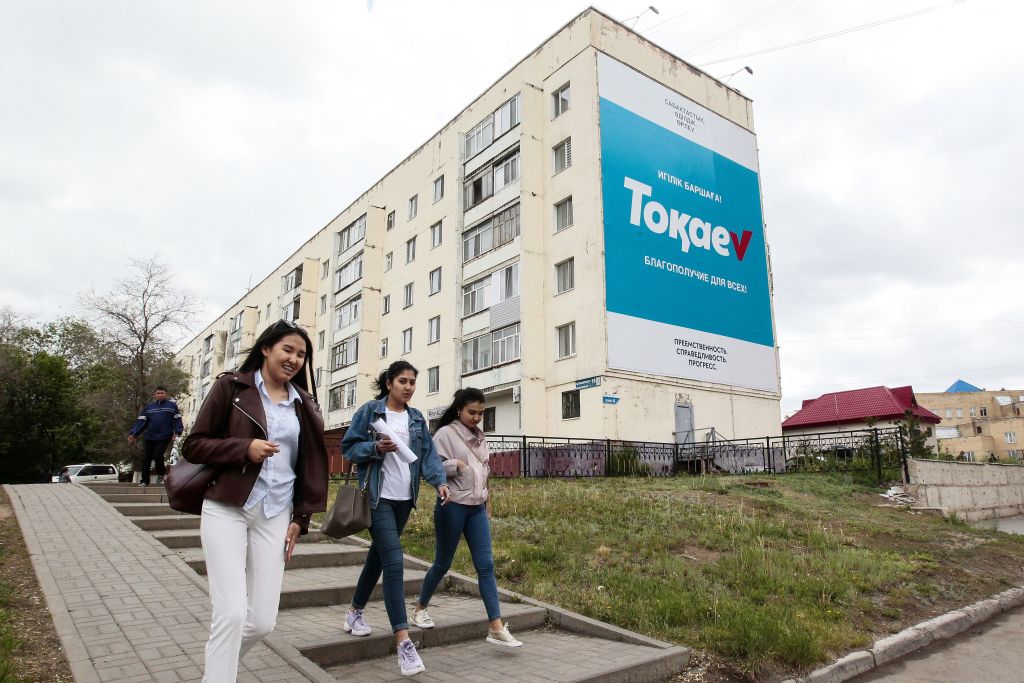 Young women walk past an election campaign billboard for Kazakh President and presidential candidate Kassym-Jomart Tokayev in Nur-Sultan on June 5, 2019, ahead of Kazakhstan’s presidential elections on June 9. (Photo by STANISLAV FILIPPOV/AFP/Getty Images)

Kazakhs go the polls on Sunday to elect a new president, though long-term former leader Nursultan Nazarbayev is likely to pull the strings from behind the scenes for many years to come.

Here are five things to know about the ex-Soviet Central Asian nation:

Since gaining independence from the Soviet Union in 1991 it has also been the world’s largest country to lack access to a sea.

The vast Kazakh Steppe is home to the Baikonur cosmodrome — the world’s most famous launch pad nearly 60 years after Yuri Gagarin blasted off from there to become the first man in space.

The Russia-controlled cosmodrome has a monopoly on travel to the International Space Station ever since NASA stopped its launches to the facility.

Former president Nazarbayev, 78, was until March the only leader Kazakhstan had known since independence.

He described the transformation of a provincial steppe town into the new capital Astana during the 1990s as one of the top achievements of his three-decade reign.

The country’s capital was previously Almaty.

The city was renamed Nur-Sultan in Nazarbayev’s honour after he stepped down as president in March. It is known for its futuristic skyline of skyscrapers and chilly winter temperatures that regularly plunge below -20 degrees Celsius (-4 Fahrenheit).

An observation tower in the centre of the city of a million inhabitants is topped with a viewing platform where visitors can place their hands on a gold imprint of Nazarbayev’s palm.

Kazakhstan is proud of its nomadic history and marked 550 years since the birth of the first Kazakh state in colourful fashion in 2015.

The celebrations followed controversial remarks by Russian leader Vladimir Putin, who said that Kazakhs had never had statehood prior to their country’s independence from Moscow.

While Kazakhstan and Russia traditionally enjoy strong relations, their shared history sometimes gets in the way.

Earlier this year the Russian foreign ministry criticised a Kazakh film-maker’s documentary which argued the famine in Kazakhstan during Soviet forced collectivisation constituted a genocide.

Kazakhstan is Central Asia’s biggest economy which has in the past seen double-digit growth, but has struggled to recover from a 2014 plunge in oil prices.

It has also been affected by the economic crisis in Russia, which led to a devaluation of the Kazakh currency, the tenge, and to high inflation.

Oil accounts for around a quarter of the country’s Gross Domestic Product and most of its budget revenues.

The world’s biggest producer of uranium, Kazakhstan is also overflowing with manganese, iron, chromium and coal.

Kazakhstan has linked the future of its economy to neighbouring China, investing heavily in its road network, railways and port infrastructure to facilitate trade links.

For all the petrodollars the resource-rich state has invested in image promotion, many beyond its borders continue to associate the country with British comedian Sacha Baron Cohen’s 2006 smash hit mockumentary Borat.

Baron Cohen’s sleazy character has faded from Kazakhstan-related headlines over a decade since the film’s release.

But he reared his head again in 2017 when Baron Cohen offered to pay fines for Czech tourists detained by Kazakh police after they posed for photos in the capital wearing Borat-style ‘mankinis’.