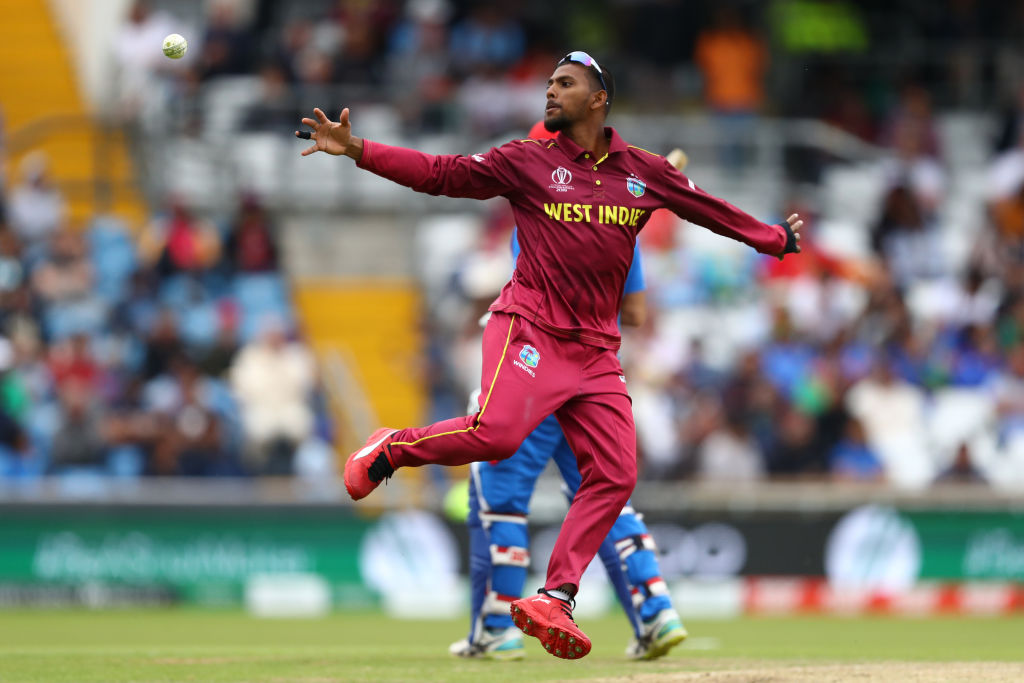 Nicholas Pooran of West Indies fields during the Group Stage match of the ICC Cricket World Cup 2019 between Afghanistan and West Indies at Headingley on July 04, 2019 in Leeds, England. (Photo by Michael Steele/Getty Images)

With the Cricket World Cup heading into the semi-finals, the tournament is set for a dramatic conclusion featuring some of the game’s finest talents.

But the group stage also introduced the world to several vibrant young talents set to dominate cricket for years to come.

Here, AFP Sport looks at five players who have announced their arrival as potential stars:

Nicolas Pooran finally showcased the talent he has promised to unleash for so long as the batsman finished as the West Indies’ leading run scorer.

The 23-year-old made a duck on his ODI debut before the World Cup but went on to play each of the team’s nine group games, scoring 367 runs at an average of 52.42.

West Indies assistant coach Roddy Estwick had seen Pooran’s potential five years ago when he scored 143 in an Under-19 World Cup match against Australia.

“I’ve always believed in Nicholas. I’m not surprised by his talent. What’s surprised me is it’s taken as long as this for him to come through,” Estwick said.

The teenager recorded Pakistan’s best-ever World Cup bowling figures with a scintillating spell of 6-35 in Friday’s win over Bangladesh at Lord’s.

He became the youngest player to take a five-wicket haul at the World Cup at 19 years and 90 days, finishing the tournament with 16 wickets in five games.

“Definitely, Shaheen is one for the future, a beacon of light for the next generation of fast bowlers,” Wasim told AFP.

Afghanistan may have left the World Cup winless after losing all nine matches, but the minnows could take heart from the rise of teenage off-spinner Mujeeb Ur Rahman.

Mujeeb took just seven wickets in the tournament, but the 18-year-old tormented batsmen with his crafty use of flight and variation, marking him out as one to watch.

Rashid Khan, his senior by two years, remains Afghanistan’s number one spinner, but Mujeeb is coming up fast, as he proved with a superb spell of 3-39 against Bangladesh in Southampton.

When Sri Lanka captain Dimuth Karunaratne reflected on a frustrating campaign for the 1996 champions, the promising form of fearless batsman Avishka Fernando put a smile back on his face.

The 21-year-old scored 203 runs in only four matches in the tournament, including 104 against the West Indies and 49 in Sri Lanka’s shock win over England.

“We’ve had a few positives out of this World Cup,” Karunaratne said. “Avishka Fernando is playing really well.

“He showed what he can do, he can produce runs for Sri Lanka. He’s one of the future stars.”

Barbados-born Jofra Archer has repaid England’s faith with a dazzling breakthrough in his first major tournament.

Archer only became eligible to play for England earlier this year and was fast-tracked into the team just before the World Cup in a bid to make the most of the paceman’s natural gifts.

The 24-year-old’s combination of speed and accuracy made him unplayable at times.

He taken 17 wickets in England’s run to the semi-finals, including a run of four successive three-wicket hauls, leading many to mark him down as the spearhead of his country’s attack for years to come.