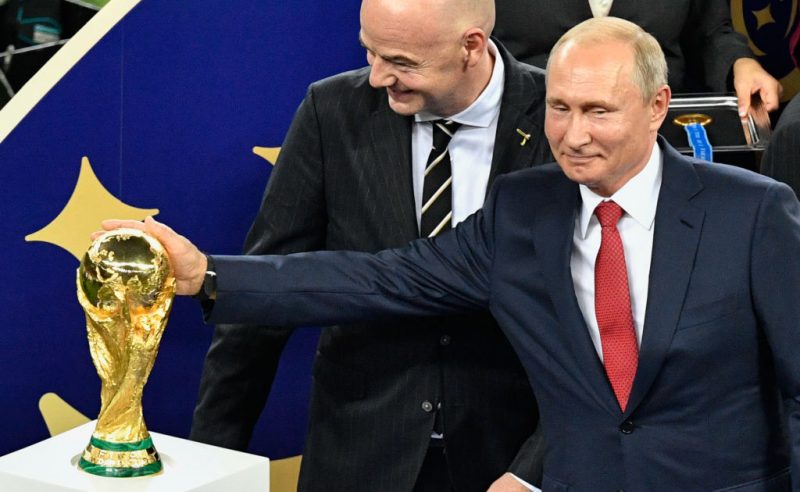 RUSSIA has been expelled from the Qatar World Cup after being suspended from all international competitions “until further notice”, FIFA and UEFA announced in a joint statement, while European football’s governing body also ended its partnership with Russian energy giant Gazprom.

The men’s team had been due to play in qualifying play-offs in March for the World Cup in Qatar later this year, while its women’s side had qualified for the European Championship in England, to be held in July.

“FIFA and UEFA have today decided together that all Russian teams, whether national representative teams or club teams, shall be suspended from participation in both FIFA and UEFA competitions until further notice,” read the joint statement from the governing bodies of world and European football.

The Russian men’s team were scheduled to play Poland in a World Cup qualifying play-off semi-final on March 24, and might have faced Sweden or the Czech Republic on March 29 for a place at the finals in Qatar later this year.

But their three potential opponents insisted they would boycott the matches.

FIFA announced on Sunday (27) that Russian teams would be allowed to continue playing under the name of the Football Union of Russia, playing home games on neutral territory and behind closed doors, and with the Russian flag and anthem banned.

But those measures were dismissed as “totally unacceptable” by Polish FA president Cezary Kulesza, who added that Poland would not play their World Cup play-off with Russia, “no matter what the name of the team is.”

FIFA changed its approach on Monday (28), kicking Russia out of the sport’s showpiece tournament.

“Football is fully united here and in full solidarity with all the people affected in Ukraine,” the statement added.

“Both presidents (Gianni Infantino and Aleksander Ceferin) hope that the situation in Ukraine will improve significantly and rapidly so that football can again be a vector for unity and peace amongst people.”

The Russian Football Union denounced the suspension, saying the move was “discriminatory”.

“It has an obvious discriminatory character and harms a huge number of athletes, coaches, employees of clubs and national teams, and most importantly, millions of Russian and foreign fans, whose interests international sports organisations must protect in the first place,” it said in a statement.

The decisions come after a widespread outcry, with global players’ union FIFPro on Monday releasing a statement saying it “strongly disagreed” with the initial measures taken by FIFA.

FIFPro criticised FIFA for not imposing stronger sanctions right away and said that participation of Russian teams in international competitions was now “not a possibility”.

With other nations also coming out to say they would not play against Russia, FIFA and UEFA were left with little choice.

FIFA had to act quickly before the upcoming World Cup play-offs and with the draw for the tournament due to be held in Doha on April 1.

Russia were supposed to play the Netherlands, Sweden and Switzerland in their group at the women’s Euro in England in July.

“This is a powerful message from the international sporting community that we will not tolerate Putin’s abhorrent assaults on freedom and liberty. Well done FIFA and UEFA,” tweeted UK Prime Minister Boris Johnson.

Meanwhile, Spartak Moscow were scheduled to play RB Leipzig of Germany in the last 16 of the Europa League.

They were the only remaining Russian team in European competition this season.

“Even though we are of the opinion that sport fundamentally unites, we understand and support this decision,” said Leipzig, who have received a bye into the quarter-finals.

FIFA, though, did not confirm if Poland would qualify directly for the final of their World Cup play-off path.

UEFA said it had ended its partnership with Gazprom, one of its main sponsors, “effective immediately”.

Gazprom has been a key sponsor of UEFA since 2012 and was believed to have been paying around $45 million a year in a deal due to run until 2024.

Russian football federation president Alexander Dyukov, boss of Gazprom Neft, the petrol branch of Gazprom, is a member of the UEFA’s executive committee.

UEFA last week stripped the Russian city of Saint Petersburg of this season’s Champions League final, moving the game on May 28 to Paris.