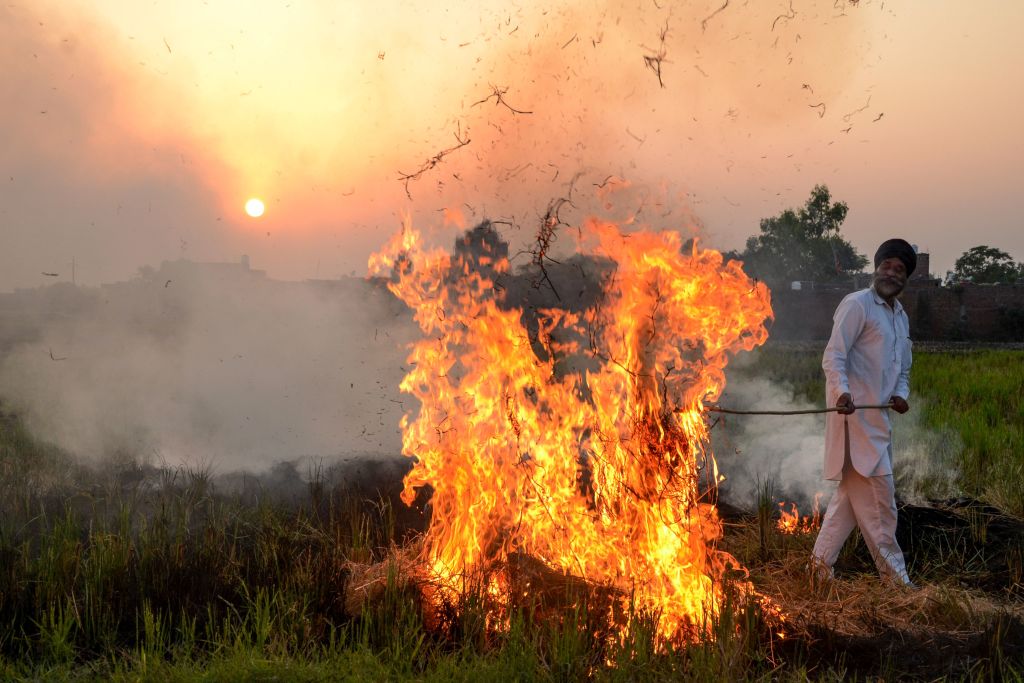 Smoke billows out of the fields in India’s Punjab state as several thousand acres of crop stubble are set on fire, wrapping surrounding areas in a thick, grey blanket.

The national capital Delhi and surrounding areas are enveloped in a layer of smog each winter as cold, heavy air traps construction dust, vehicle emissions and smoke from the crop stubble burning in the states of Punjab and Haryana.

Raging farm fires in these states have become a common sight as farmers burn crop waste to clear their fields after a harvest and prepare for the next sowing. Typically, the harvesting of summer-sown crops starts in October and sowing for the winter crop is carried out a couple of weeks after the harvest.

Farmers in Punjab, known as India’s grain basket, claim they have no other option to get rid of their crop waste.

“If, instead of burning, the stubble has to be disposed off in any other manner, then that involves a lot of expenditure,” Paramjit Singh, general secretary of a prominent farmers’ union in Punjab, told Reuters.

But he said the stubble fires hurt locals more than the people in Delhi, about 280 km (170 miles) south of Khamanon town in Punjab’s Fatehgarh Sahib district.

“It will reach Delhi much later but the first (casualty) is the farmer because he is standing in the middle of it when he burns it,” said Singh, 45, standing in a field of burnt crop waste near Khamanon as orange flames consumed nearby fields.

“He is helpless, he is not lighting it up out of choice.”

The Aam Aadmi Party (AAP), which is in charge of the government in both Delhi and Punjab, has taken responsibility for failing to curb stubble burning and said last week that it aims to resolve the problem by November next year.

“We have distributed around 120,000 machines to the farmers that assist in destroying the crop residue without having to burn it down,” Punjab Chief Minister Bhagwant Mann told reporters.

He said the Punjab Agricultural University had developed a mobile app to identify the location of these machines and the government has also set up a bio-energy plant for disposal of crop stubble.

The AAP has urged the federal government to facilitate joint meetings between the northern states to identify the causes of pollution and come up with solutions to address the problem.

A federal government official, speaking on condition of anonymity, said the centre has already disbursed funds to the state authorities to offer alternative ways to the farmers to move away from burning crop stubble.