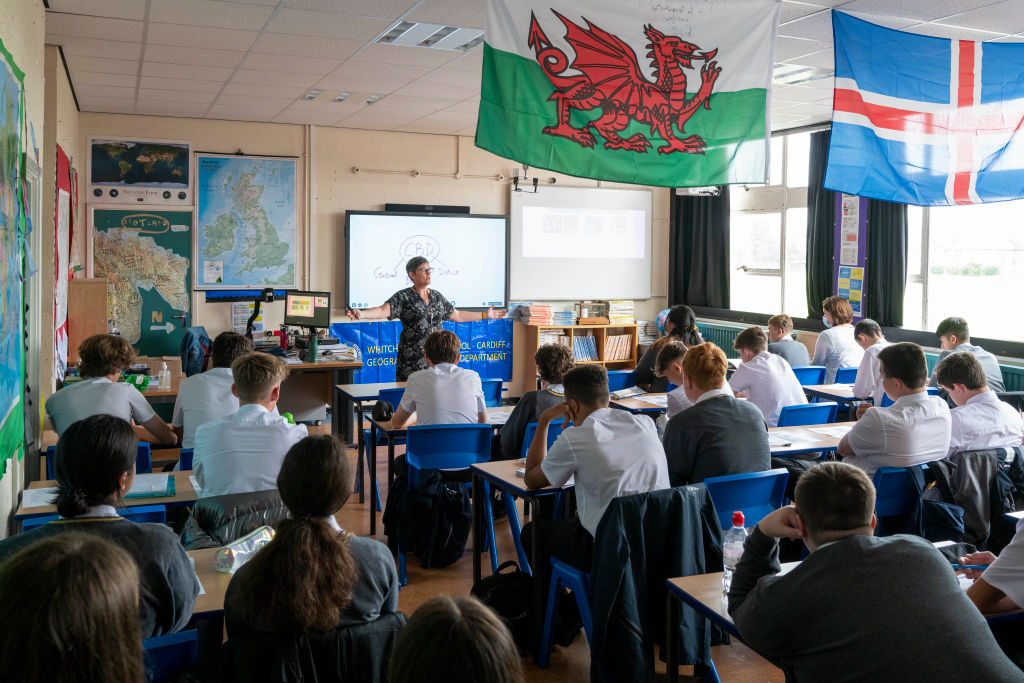 CARDIFF, WALES – SEPTEMBER 14: A general view as pupils listen during a geography lesson at Whitchurch High School on September 14, 2021 in Cardiff, Wales. All children aged 12 to 15 across the UK will be offered a dose of the Pfizer-BioNTech Covid-19 vaccine. Parental consent will be sought for the schools-based vaccination programme. (Photo by Matthew Horwood/Getty Images)

Schools are being advised to work in partnership with councils and consider targeted family support or home visits where there are barriers to attending school, a statement said on Friday (2).

This is part of a package of new and innovative measures to ensure that more children are in school every day, including targeted support for individuals and improved data tools that will better identify and solve consistent issues.

The Department for Education is also launching a three-year 1-2-1 attendance mentoring pilot, aimed at tackling the factors behind non-attendance such as bullying or mental health issues.

It will be launched in Middlesborough this year, before expanding to other areas of the country next year. The pilot will provide tailored support to over 1,600 persistently and severely absent pupils over the three-year period.

Schools, academy trusts, local authorities and the government will also have access to a powerful new attendance data visualisation tool to help to spot and respond to issues. It will support the launch of the new, interactive national attendance dashboard alongside the publication of the first full fortnightly attendance data of the term.

This is expected later in September and will providing ongoing transparency and vastly improved potential for insight and analysis of daily, weekly and termly trends.

Education Secretary James Cleverly said: “All the evidence shows that being in school is vital for helping pupils achieve their potential. That is why it is so important for them to attend every day they possibly can.

“It’s also great that we can mark the new school year with a major milestone – over 10,000 academies are now open in England. The academies programme has been transforming children’s education for over a decade now and I look forward to building even more momentum so all schools can join strong academy trusts in the coming years.”

The majority of schools are now seamlessly sharing daily register data with the department, where it is aggregated and presented back in dashboards to schools, academy trusts and local authorities.

It will help teachers to analyse attendance with greater ease, allowing issues with individual pupils, or groups such as children on free school meals, for example, to be spotted more quickly.

There will be a renewed focus on maximising pupils’ time in the classroom, as evidence shows that the students with the highest attendance throughout their time in school gain the best GCSE and A Level results, the statement added.

As outlined in the Schools White Paper, the government is introducing a wide range of tools and programmes to tackle low attendance, including new best practice guidance on improving attendance for schools, trusts and local authorities.

The guidance makes clear that schools should provide individualised support to families that need it.

There are now over 10,000 academy schools open in England as a result of over 100 new academies converting on Thursday (1).

The government said that 29 local authorities have expressed an interest in setting up local authority-established multi-academy trusts as part of the trial planned for this year.

Since 2010, there has been nearly a 20 ppt rise in the number of Good or Outstanding schools, reaching 87 per cent of all schools in December 2021. More than seven out of 10 sponsored academies which were found to be underperforming as an LA maintained school in their previous inspection now have a good or outstanding rating.

Sylvie Newman, executive headteacher at Donisthorpe Primary School said: “We have been exploring joining a multi academy trust for a number of years, but choosing the right one has been very important. The primary motivator is keeping our unique identity but to also providing Donisthorpe with group strength and an opportunity for us to feel part of something ‘bigger’ and to draw knowledge and share expertise.

“We will be able to provide opportunities for staff to progress their careers within the trust thereby strengthening retention.”

Schools will shortly be provided their budgets for free period products for this year. Teachers of high demand STEM subjects in the country’s most disadvantaged schools will receive up to £3,000 tax-free this academic year, as well as the next two years afterwards.