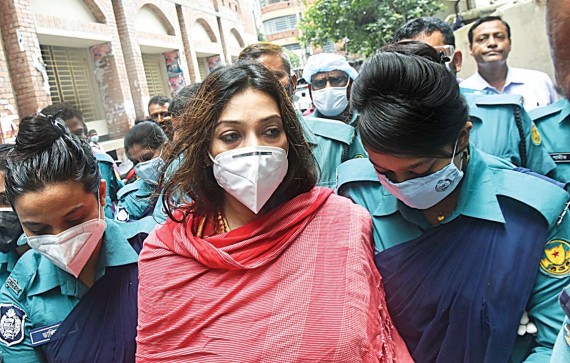 The Detective Branch of Police is investigating the COVID-19 test scam involving Sabrina A Chaudhury, a government doctor with ties to JKG Health Care.

A Dhaka court granted the police three days on Monday to grill Sabrina Chaudhury, also known as Sabrina Sharmeen Husain, arrested over her alleged ties to the scam.

Sabrina, a government cardiac surgeon and the wife of JKG Health Care CEO Ariful Chaudhury, was suspended and arrested over her alleged involvement in the testing scam on Sunday.

The swabs collected at the walk-in kiosk at Dhaka’s Khilgaon Girls School and College are sent to government-authorised laboratories for testing. Photo: Mahmud Zaman Ovi

Police brought charges against JKG Health Care for providing false reports without testing the swabs collected from the people for COVID-19 tests. A case was filed against Ariful and four others for their alleged involvement in the testing scam. They are currently behind bars.

Police arrested Sabrina after summoning her to their offices. She was subsequently taken to a Dhaka court on Monday.

The health ministry also suspended her for violating service rules by holding the post of chairman in a private company without permission while working as a government doctor.

Dr Sabrina was known as the chairman of JKG Health Care when the Directorate General of Health Services authorised it to carry out COVID-19 tests months ago.

But she denied having any tie with JKG after health regulators stripped the company of its permission to collect COVID-19 samples on Jun 24.

Four cases were filed against JKG: three of them include fraud charges, according to Tejagaon police’s Additional Deputy Commissioner Rubaiyat Zaman.