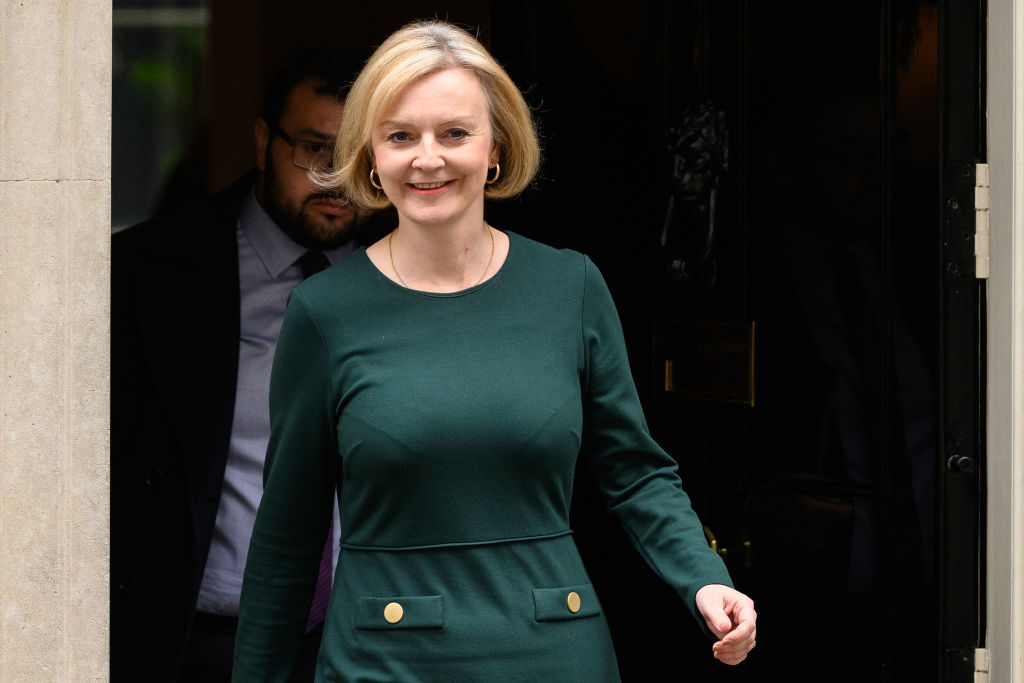 LONDON, ENGLAND – OCTOBER 12: UK Prime Minister Liz Truss leaves number 10 Downing Street ahead of the weekly PMQ session on October 12, 2022 in London, England. The UK Prime Minister takes questions in the House of Commons against a backdrop of continuing market turbulence after huge tax cuts were announced in the new Chancellor’s mini-budget on 23 September 2022. (Photo by Leon Neal/Getty Images)

Discounting 10 days of mourning for the late Queen Elizabeth II, Truss had only a week before her political programme imploded, leading to the sacking of her finance minister. “That is the shelf-life of a lettuce,” The Economist newspaper commented last week.

Truss wins a vote by Conservative party members by 81,326, against 60,399 for Rishi Sunak, who served as finance minister under previous prime minister Boris Johnson.

As the new leader of the largest party in parliament, that makes her prime minister — despite support from less than 0.2 percent of the electorate and a minority of her own MPs.

The next day, she is confirmed as prime minister by the queen.

Truss installs the like-minded Kwasi Kwarteng as chancellor of the exchequer.

But the dramatic announcement is eclipsed by the queen’s death, which suspends all government business for 10 days.

Kwarteng announces a “mini-budget” which details the price of the energy scheme -– £60 billion ($67 billion) over the next six months.

But there are no measures to raise funds.

Instead, he announces massive new borrowing to pay for sweeping tax cuts — including for top-earners — along with scrapping a cap on bankers’ bonuses.

The announcement draws immediate political fire for being unfair. But the most stinging verdict comes from the markets as the pound plummets towards parity against the dollar.

Two days later, on a Sunday, Kwarteng vows “more to come” on tax cuts. The next day, when markets reopen, the pound plumbs new depths.

The budget is dubbed “Kami-Kwasi” by media, which begin reporting tensions between Kwarteng and Truss, and deep disquiet among Tory MPs including cabinet ministers.

Pollsters YouGov report a 33-point lead for the main opposition Labour party –- its biggest margin over the Tories since the heyday of former Labour prime minister Tony Blair in the late 1990s.

Other polls also point to electoral disaster for the Conservatives. Hours before his keynote speech at the party’s annual conference at the start of October, Kwarteng vows to “stay the course”.

Kwarteng and Truss are forced into a humiliating U-turn, scrapping the planned cut in the top rate of income tax following hurried late-night talks.

In her own conference speech on October 5, Truss vows to pursue her “growth, growth, growth” agenda but fails to reassure party rebels and nervous markets.

In another volte-face, Kwarteng reveals he will publish a medium-term fiscal plan alongside independent budget forecasts on October 31 –- Halloween –- rather than in late November as originally planned.

But on October 12, Truss rules out any cuts to public spending, despite vowing no further U-turns on the remaining tax cuts, compounding perceptions of a government in chaos.

With markets still rattled and pressure piling on Truss, the prime minister fires Kwarteng after just 38 days in the role.

Kwarteng defends the economic programme in a letter to Truss, insisting it was needed because “the status quo was simply not an option”.

In his place, she appoints former foreign minister Jeremy Hunt.

In what right-wing tabloid The Sun calls “a day of extraordinary mayhem”, hardline interior minister Suella Braverman quits following a row with Truss and Hunt over immigration, saying that she had “serious concerns” about the government.

A parliament vote on banning fracking descends into chaos as Tory MPs are told they must vote in line with the government, despite widespread opposition.

Truss won the vote, but many MPs rebelled anyway, briefing journalists that it was the final nail in the coffin for Truss’s premiership.