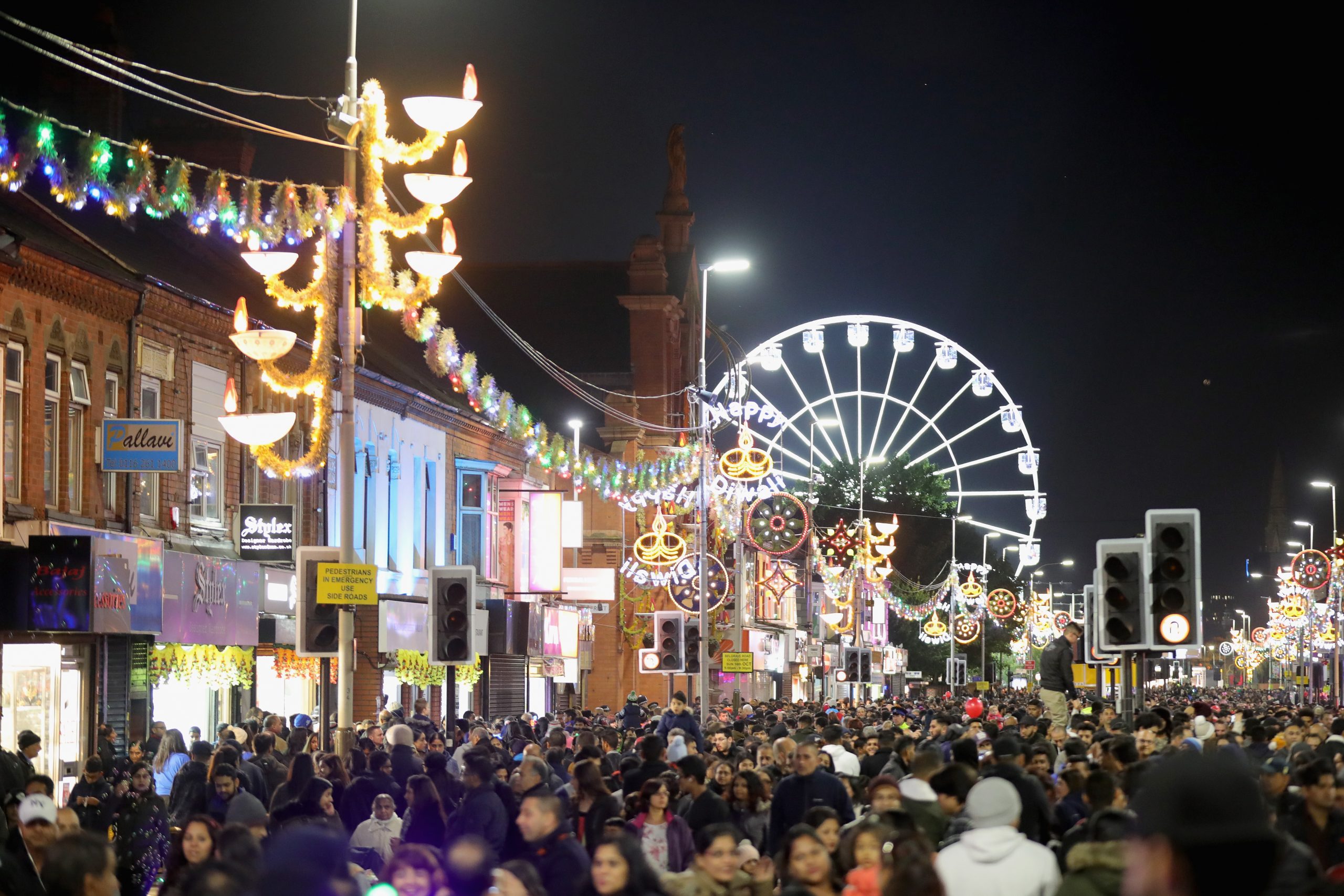 Leicestershire’s chief constable has promised to punish anyone who threatens to spoil Diwali celebrations in his city.

In a wide ranging exclusive Eastern Eye interview, Rob Nixon warned troublemakers to stay away from Leicester or feel the full force of the law.

“If people from outside of Leicester are trying to get involved, and they’re traveling here with the intent of causing disorder, then we will take really positive action,” Nixon said.

“They’re not welcome to come and cause trouble on the streets of Leicester.

“This is not a place that will tolerate it.

“We know for a fact that we’ve identified that there were some people traveling over from Birmingham, for example, and we’ve intercepted them on the way into Leicester.

“We’ve also intercepted people going away from Leicester and they’ve been arrested, and they’re in the process of being processed and charged.”

The city hosts the biggest Diwali celebrations outside India.

Last month hundreds of Hindus and Muslims clashed with police and one another resulting in 47 arrests.

“During Navratri, we continued to have the increased policing presence on the streets of Leicester,” said the chief.

“We’ve done that all the way through, that was our commitment to the communities, and likewise, we have given equally the same level of commitment to Diwali.

“Diwali is a significant event for Leicester, and we will ensure that we are putting that increased resourcing on the streets, not just for reassurance and engagement, but actually to be in a position to respond really quickly and really firmly if people decide to come to Leicester in order to cause trouble.”

An independent review is expected to investigate the causes of the disorder.

Last week the police chief met the city’s elected mayor, Labour’s Sir Peter Soulsby, and civic leaders to discuss when the review would begin, who might lead it and what areas it would focus on.

But Nixon told Eastern Eye that the reasons for the disturbances were complex.

“I keep referring to those different layers, and depending on who you speak to, they prioritise different elements to it.

“I guess, there’s a sense that you’ve got some new people arriving, members that have joined the community, they’ve been coming in, just prior to Brexit.

“The suggestion being that they have then been locked down during Covid, and then post Covid, that has been seen a conflict.

“There’s a perception that some a small minority of a community have acted in a very sort of anti-social and almost disrespectful way to different cultures, and that has heightened tensions.”

Independent sources have told Eastern Eye that the newly arrived immigrants are Hindus from Daman in west India.

Our sources say the new community has caused problems, and their youth will not listen to their elders.

Nixon said his officers had been told of problems of youth in both Hindu and Muslim communities.

“It’s probably wider across many of the communities that they’re getting their influence from different areas.

“Some historically would be community and faith-based leaders.

“Now, the suggestion is that some people are getting influenced more by social media, and therefore, there is a disconnect between some of the youth voice and some of the traditional faith-based leadership.”

Another reason, as Eastern Eye has regularly reported, is thought to be the politics of the Indian sub-continent.

“There are elements that believe this is linked with the prevalence of international to local influence.

“So, that sense that politics and agendas that are being played out overseas have been brought into the UK, and there’s a genuine fear that that is then leading to the presence of radicalisation in the streets of Leicester.

“Others perceive that there’s tension over territory, and that territory can take two different routes.

“One could be around open space facilities, so parks and recreation areas, but also, there are some that believe that you’ve got some territory which has been defined by the type of communities that live there.”

For decades the government, local leaders and the police held up Leicester as the model of racial and religious harmony in the UK.

Nixon, who has served as a Leicestershire cop for almost 30 years, agreed that the disorder took him and others by surprise.

“I’ve always firmly believed and championed that Leicester is a beacon area for diversity.

“Other people up and down the country look to Leicester for leadership and inspiration as to how different cultures and faiths live side by side and I make no apologies for it.

“I’m proud of policing Leicester because of that, and I’m better in my role because of the friendships I’ve formed over the years.

“My sense would be we need to keep this into perspective.

“This is a small minority of people, and I often keep referring that Leicester as a whole has not turned in on itself.

“And the impact of that is it’s having widespread fear amongst the silent majority.”

The chief, who will know if he has been confirmed in post in the coming weeks, said the violence and subsequent soul searching were the moment for self and critical reflection on lessons to be learnt.

“There will always be those that believe that because things have been so harmonious for a long time, that complacency sets in.

“With any incident like this, it’s an opportunity to be really self-critical, and I keep referring to this as a reset moment.

“So, it would be really ridiculous to sit here and say, well, it’ll all blow over, and we’ll get back to normal in a few weeks’ time.

“We need to just accept that what’s happened has happened, and I think most of us are looking at it very, very critically to say, okay, well, that needs to shift, because the neighborhood dynamic has shifted.

“So that reset moment, I think, is needed, but once we’ve gone through that, and we’re working our way through the different layers of complexity, there’s an opportunity to refresh that cohesion and get back to being that beacon area that people want to be.”

So, what would he do differently?

“There’s something about the localised oversight of certain types of crime and getting officers to understand the cultural sensitivities that might be linked.

“For example, something that is reported in isolation can be fairly relatively low level.

“But if you start to put a community lens across that, around the sensitivities, will you start to identify that there’s perception that’s being committed by one community to impact on another that that might require a different response?

“That’s a reflection that I’ve had, and we’ll certainly be looking to put in place something around serious crime, and the frequency and reviews that the supervisors are checking progress on that.

“Within that progress, and checking of that, particularly where there are cultural sensitivities, I want to ensure that there’s a real robust link with the victims.”

The problem with social media, said the chief, was that you could not always believe what was being posted.

“I have flashbacks back to 2010, when I was the BCU [borough] commander in the city.

“We obviously had two large scale operations involving the EDL, and certainly, I wouldn’t want to see a return to those days.

“But what’s the level of truth in it?

“I’ve certainly not been able to validate one way or the other, whether that’s true or false.”

Two days later she wrote to police chiefs that there was a perception that forces “have had to spend too much time on symbolic gestures, rather than actually fighting crime”.

She criticised diversity and inclusion initiatives and said they “should not take precedence over common-sense policing”.

Nixon told Eastern Eye that he liked and respected Braverman, yet his force area was diverse and inclusive.

“I’m not entirely sure what is meant by this term ‘woke diversity’.

“I see it get played out on social media.

“For me, diversity is absolutely at the heart of policing of Leicester, because it starts with the cultural intelligence and the understanding of the communities that we serve.

“Because if you’re not sensitive to the different communities, and you don’t understand how that community works, and interact, how on earth can we deliver a really good service to that community?

“How on earth do we recognise where tensions will get inflamed?

“So, for me, I think there are some people that are trying to peddle that diversity has gone a little bit too far, and I’m sure that people have got different understandings of what diversity is.

“For me, diversity is absolutely at the heart of policing.

“If we are serving one of the most diverse communities in the country, if we don’t get that right, we don’t understand diversity.

“We don’t understand the fates of cultures, how to respond, how to be respectful.

“A one size fits all approach died years ago, in terms of policing, and we need to be responsive.”