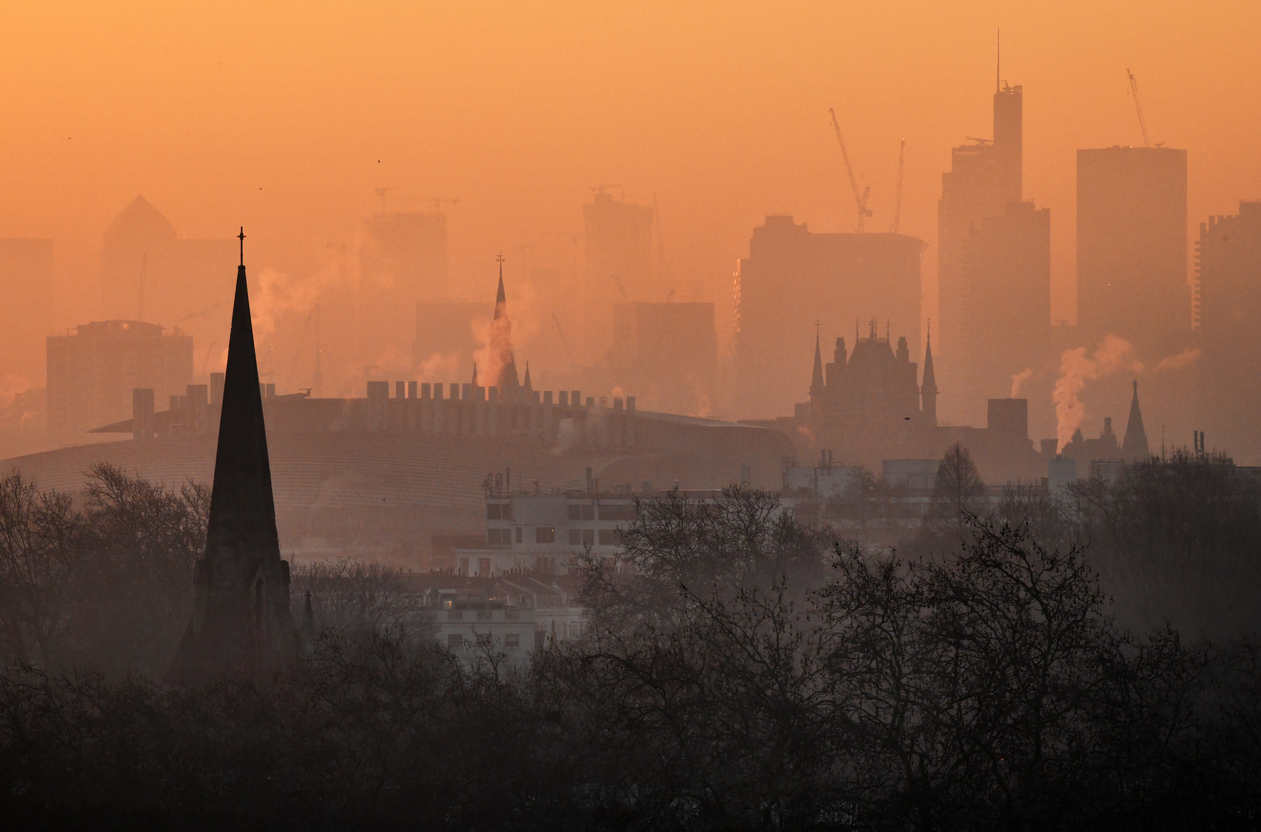 The view over the London cityscape at dawn from Primrose Hill in the north of the City.

A new study has revealed that minorities are over three times more likely to live in areas in England with ‘very high’ air pollution, according to a report.

The study by Friends of the Earth, by analysing government data on air pollution, focusing on nitrogen dioxide (NO2) and small particulate matter (PM2.5), added that people of colour are at disproportionate risk of heart attacks, cancer and strokes, The Guardian reported.

The areas in England with cleanest air are inhabited by white people, with fewer than one in 20 people from a minority ethnic background living in these non-polluted areas.

Minorities made up almost half the population in regions where NO2 and PM2.5 are double World Health Organization guidelines, the study added.

Transport emissions, especially from vehicles running on diesel, are the primary source of NO2 emissions, and wood burning, industrial processes and traffic, including dust from tire and brake wear, are the main sources of particulates.

PM2.5 pollution causes lung cancer and cardiovascular disease, and causes dementia. NO2 pollution leads to coughs, mucus buildup and shortness of breath, and stunts the growth of children’s lungs.

According to the research, one million children and 1,737 schools were in areas with very high air pollution.

Rosamund Adoo-Kissi-Debrah, whose daughter, Ella, was the first person to have air pollution given as a cause of death after she died following an asthma attack in south London in 2013, said that the ‘data is shocking, but unsurprising’.

“It re-emphasises the urgency with which our country, and London particularly, needs action on air pollution. Everyone deserves a right to breathe clean air, particularly children, who are worst impacted because their lungs are still developing,” Adoo-Kissi-Debrah said.

“Liz Truss, the new PM, needs to tackle this as a matter of urgency. This is something we need to see by the end of October, when the new targets must be set – and currently, the government’s ambitions fall well short of the latest WHO guidelines.”

There are 2,546 neighbourhoods in England where average levels of NO2 or PM2.5s were double WHO recommendations. As many as 44 per cent of the population in these areas are from a minority background.

“It’s a scandal that more than a million children and young people in England live in areas where average air pollution levels are twice World Health Organization guidelines for either or both of two of the deadliest pollutants,”Jenny Bates, Friend of the Earth’s air pollution campaigner, was quoted as saying by The Guardian.

The WHO pollution limits are far more stricter than those recognised by UK law. Since September 2021, the health body has recommended an annual average of 5 µg/m3 for PM2.5 and 10 µg/m3 for NO2.

In the wake of the study, the charity has urged the British government to act fast to curb air pollution.