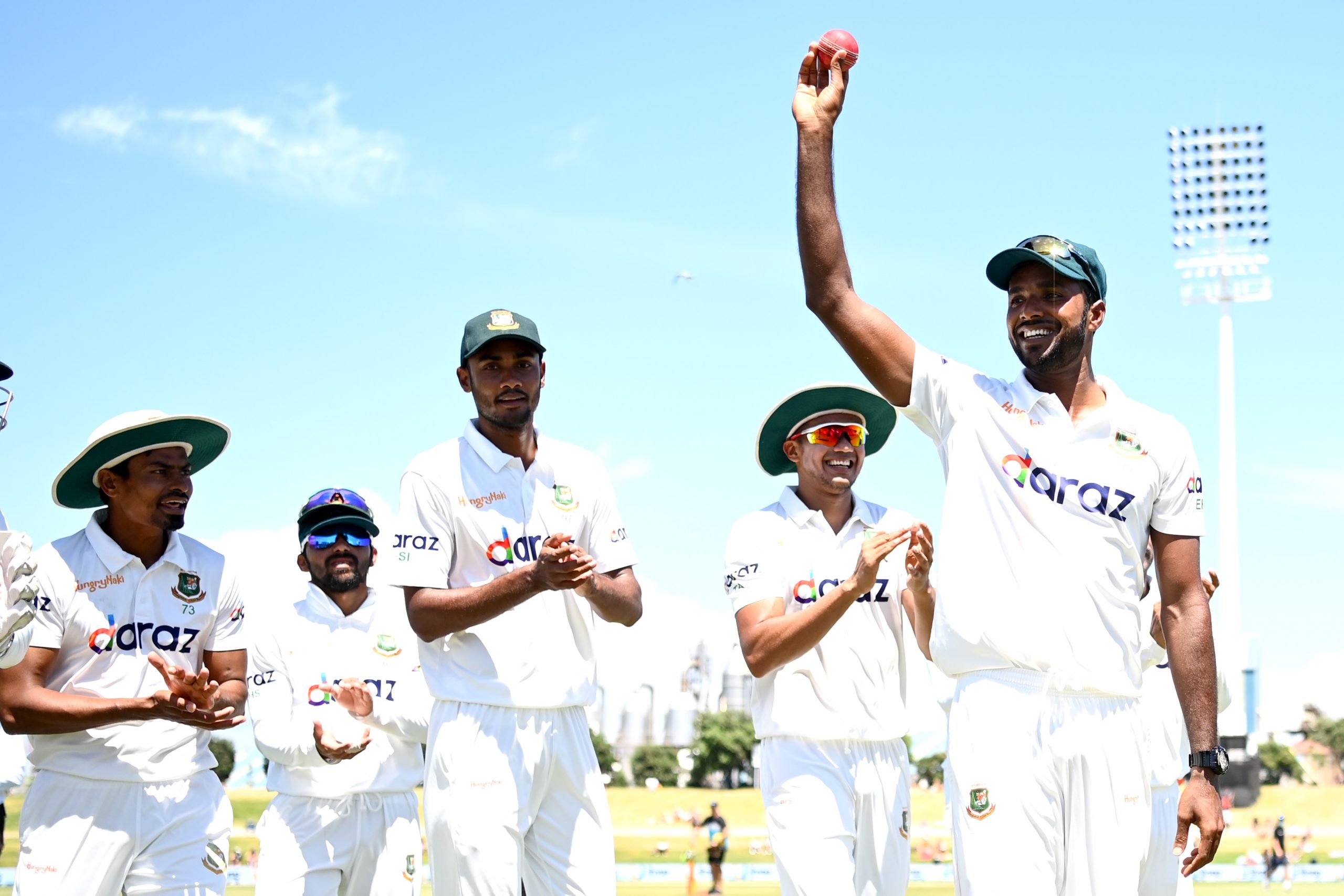 Ebadot Hossain leads his team off the field after claiming a five-wicket haul. (Photo by Hannah Peters/Getty Images)

HE used to play volleyball and is in the air force, but Ebadot Hossain announced himself as a world-class cricketer on Wednesday (5) with a scintillating six wickets that set up Bangladesh’s historic Test win over New Zealand.

After each wicket, the raw but charismatic 27-year-old fast bowler saluted as the fallen batsman departed Mount Maunganui’s Bay Oval – a nod to his services background.

Ebadot’s figures for the tourists in New Zealand’s second innings were six for 46, winning him the man-of-the-match honours and signalling his development as a cricketer had entered a new phase.

In the first innings he took one for 75 – more in keeping with his career average of 81.54 from 11 wickets in 10 Tests before arriving in New Zealand.

His journey into Bangladesh cricket folklore has been swift, starting as recently as 2016, when he travelled 350 kilometres (200 miles) from his home town to take part in a bowling competition.

He was selected as one of three to attend a training camp in Dhaka and by 2019 he was in the Test squad, where he stood out with his pace, but there was a lack of finesse.

Ebadot said that he had been working hard with bowling coach Ottis Gibson, who played for the West Indies.

“Conditions are always flat at home. We are still learning how to bowl and reverse in away conditions,” said Ebadot.

“I am trying to hit the top of the stumps. I needed to be a little patient for success to come.”

Ebadot is not your usual cricketer.

He was employed several years ago as a volleyball player by the Bangladesh Air Force, were he also learned the importance of the salute which he delivers with each dismissal.

With New Zealand starting their second innings 130 in arrears they were struggling at 147 for five when play resumed on the fifth morning with Ebadot having taken three wickets for no runs in the space of seven balls.

New Zealand needed veteran Ross Taylor to produce something magical, but he was undone by an Ebadot one-two – an out-swinger followed by one that came back and hit the wickets.

Although there is some guile to his play, the raw Ebadot still needs help with field placings and lengths, and also with his confidence.

“He’s a joy to work with because he’s enthusiastic and he wants to learn so much. When his confidence is high he can bowl spells like this,” Gibson said.

“We have to consider that Bangladesh play Tests infrequently so he doesn’t get to play regularly. Fast bowlers don’t have everything under their control,” he said.

“I am hopeful that he will keep proving himself in the future too.