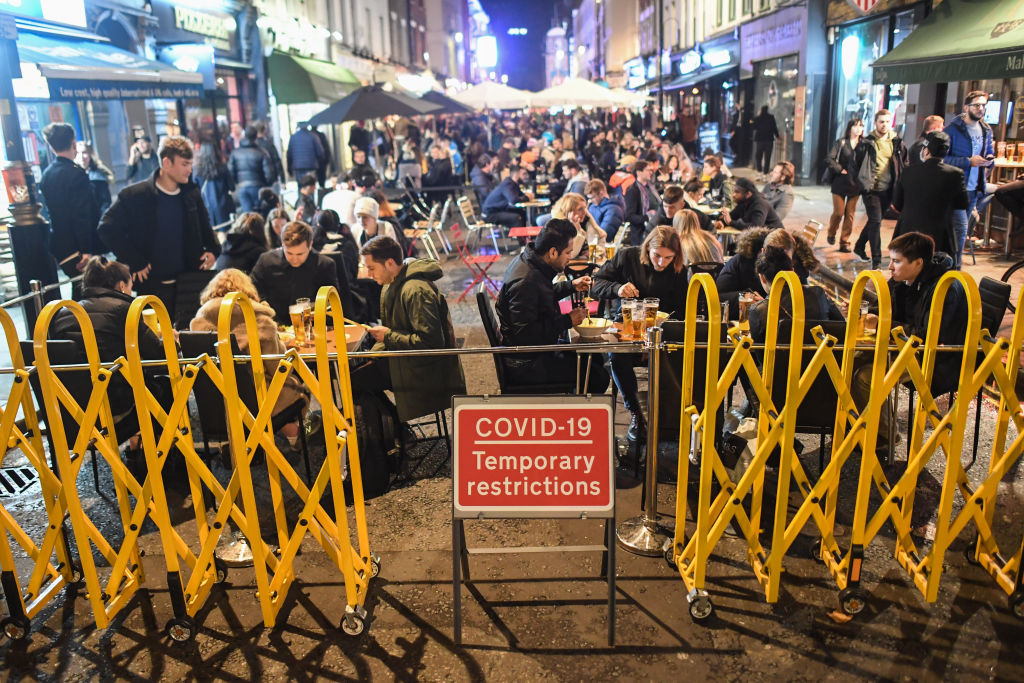 People seen outside bars and restaurants in Soho during Halloween celebrations on October 31, 2020 in London, England. (Photo by Peter Summers/Getty Images)

CHANCELLOR Rishi Sunak’s Eat Out to Help Out scheme last summer may have triggered a rise in Covid-19 related deaths among Bangladeshi and Pakistani communities, a scientist has said.

Since more people from the Bangladeshi and Pakistani communities in the UK are self-employed in small restaurants and eating joints, Professor Parvez Haris of De Montfort University said the government subsidised Eat Out to Help Out scheme may have “backfired” for these groups, who bore the brunt of high Covid-19 infections and more deaths during the second wave as compared to whites and other communities.

In an interview with Eastern Eye on Monday (19), Prof Haris explained how a surge in customers in restaurants during the pandemic created an “ideal environment” for high exposure to the virus.

“Everyone worked together to increase profits and so forth, forgetting perhaps the fact that there is a virus around and that could have an impact.

“Often, seven to eight, even 10 people are working in a very close amount of space, in very close proximity. So, there is a lot of exchange of droplets of the virus – be it influenza virus, or some other bacteria or the Covid-19 virus,” he said.

In contrast to whites as well as other ethnic groups, Prof Haris claimed there was a dramatic increase in deaths, among men and women from Pakistani and Bangladeshi ethnicities during the second wave of Covid.

The Office for National Statistics shows that more than 30 per cent of the Pakistani and Bangladeshi population in the UK work in the hospitality industry, higher than any other ethnic group, while almost 20 per cent work in transport.

Prof Haris also pointed out how black people did not see a spike in deaths in the second wave since most of them work in safer conditions and have adapted well to safety standards.

“About 46.7 per cent of black people work in organised sectors like education and health, so they got the opportunity to work remotely, along with access to safety measures,” he said.

More than 30 per cent of Bangladeshi and Pakistani people are self-employed in the UK making them the “highest number of self-employed groups of any ethnic community.

They are mostly in small businesses where they neither have resources nor the “luxury of working from home,” the academic said.

Asian communities are also more vulnerable to Covid-19, Prof Haris said, adding there is a higher incidence of diabetes among Indians, Pakistanis and Bangladeshis as compared to white people.

Having diabetes increases the risk of Covid-19, leading to hospitalisation and even deaths.

Prof Haris pointed out higher death rates in Leicester, northwest England, Yorkshire and Bradford, where the “Eat Out to Help Out schemes were taken up largely”.

He explained: “Small kitchens in restaurants and fast-food outlets with seating were packed with staff serving unusually high numbers of customers taking advantage of these heavily discounted meals.

“Wearing masks, at least properly with the nose and mouth fully covered, in a hot kitchen environment, during busy periods and over several hours of continuous work, is unlikely to have been easy.

“Social distancing in a kitchen environment is virtually impossible due to space limitation and the need to move around.

“Furthermore, the ventilation systems in kitchens vary widely and may not have been adequate enough to eliminate virus-laden water droplets exhaled by the restaurant workers.

Claiming ventilation is the key, Prof Haris called for more support and grants for small restaurants and similar businesses to improve their working conditions.

“They should be given some grant to improve ventilation that will not only protect the staff, but it will also protect the people who go out and eat in these places.”

On vaccination, the professor said uptake in the Pakistani and Bangladeshi communities was not a problem.

“It is an issue among Caribbeans and Africans and that is being discussed. But for the Indians, Pakistanis and Bangladeshis, vaccine uptake has been quite high,” he said.

Prof Haris added, “It is not rocket science. Covid-19 is an occupational disease that became clearly evident in the UK through the differences in mortality rates among ethnic groups in the second wave, with dramatic increases in groups working mainly in the hospitality sector during the Eat out to Help Out scheme.”

According to him, “we should rather use such findings for future policies”.

“The government, I’m sure, had good intentions in terms of helping this sector, but in public health issues, sometimes it’s so difficult to know what may happen later.

“We should use the data for good causes to know who is being affected the most, and identify why, and then find solutions to these problems.

“We are living in an advanced age, and we should be driven by knowledge and data.”

Prof Haris is due to present the findings of his data analysis at the International Festival of Public Health in Manchester on Thursday (22).

He will also tell the conference the Office of National Statistics figures show the Bangladeshis and Pakistanis make up the highest percentage of people working in the transport and communication sector, at 17.8 per cent.

“This category of workers, particularly taxi and mini-cab drivers, would have been more active taking customers to and from restaurants. The drivers needed the money and the customers were after a much-needed night out,” he said.

“To protect lives and protect the NHS, we need to address the occupational exposure in businesses such as takeaways, restaurants, cafes, pubs, taxis and mini-cab firms, many of which are small businesses and lack the necessary resource to implement health and safety procedures to protect their staff.

“Ultimately it is not about race, ethnicity or class, it is about saving human lives and data should be used to identify who is at risk, and why, and how things can be changed for the better.”