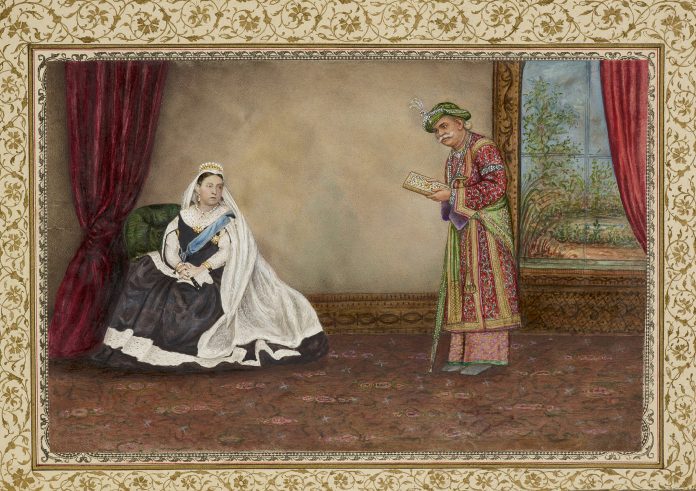 A NEW exhibition featuring four centuries of paintings and manuscripts gifted to the British monarchy from the Indian subcontinent is a “once in a generation experience,” its curator has said.

Eastern Encounters showcases a number of artworks, including vivid depictions of the Mughal court, royal portraits and illustrations from Hindu epics. Showcased at The Queen’s Gallery, Palace of Holyroodhouse in Edinburgh, this will be the first time the items are on display to the public.

Emily Hannam is the exhibition curator. As the collection is so “delicate,” Hannam said they are unable to be on public display for long periods of time.

“(The collection) is so fragile and delicate so we’ve gone through a long project of conservation to allow them to travel from Windsor up to Edinburgh to be seen in the Queen’s Gallery,” she told Eastern Eye. “We would love to be able to have them out all the time, but they are very light sensitive, so we have to balance the conservation needs of the works.

“This is really a once in a generation experience.”

Originally due to premiere in April, the exhibition is now accessible to the public after museums and galleries were approved to reopen following the easing of Covid-19 lockdown measures. It will be the first time the collection will be shown in Scotland.

“The exhibition is bringing together the highlights of the south Asian paintings and manuscripts from the Royal Collection, usually housed in the Royal library at Windsor so it is really exciting that we are bringing them to Scotland,” Hannam said.

Revealing her personal favourite from the collection, Hannam pointed out A Chameleon by animal painter Ustad Mansur. Originally from the 17th century, the miniature painting depicts a chameleon watching a small insect hover by.

Mansur used tiny dots of paints to mimic the surface of the chameleon’s skin and a gold crescent can be seen in the animal’s black pupil. When light shines on the painting, Hannam noted, the gold reflects so the creature looks as though he “has a glint in his eye”.

“I feel all these works are like that – the more you look at them, the more you see,” Hannam, who has worked at the Royal Collection for six years, said. “You only really appreciate these details if you get really close to them.”

Other items within the showcase include a Mughal album of paintings and specimens of calligraphy assembled under Emperor Muhammad Shah; an 1854 painting entitled Maharajah Duleep Singh dressing Prince Arthur in Punjabi Attire and Queen Victoria’s Hindustani diaries.

The diaries feature pages of the famous Monarch’s writing, as she attempted to learn Hindi. Appointed Empress of India in 1876, the Queen was known for her fascination with the country.

“Her Hindustan diaries are basically her schoolbooks,” Hannam explained. “It is more content about what the weather is like, or what she is doing on that particular day – like when you learn a language at primary school.

“It is not her deepest darkest thoughts and desire. It is very much her practising the language that she would have in conversation, if she was to have polite conversations with someone who spoke Hindi.”

Hannam believes most people think of Queen Victoria when they associate the relationship between the monarchy and the subcontinent. However, the curator hopes visitors will be intrigued when they learn about the earlier relationship between Indian rulers and British monarchs such as George III and George IV.

Hannam also expressed hope guests will enjoy the stories of the items on display.

“(The exhibition) isn’t only focusing on the art – the painting and manuscripts tell this amazing story of more than 400 years of the shared history between the British monarchy and south Asia,” she said. “It had a massive impact on the Britain of today and people will see it is an important story that hasn’t been told before.”

Eastern Encounters: Four Centuries of Paintings and Manuscripts from the Indian Subcontinent will be open to the public on Thursday (23). For more information, see: www.rct.uk/