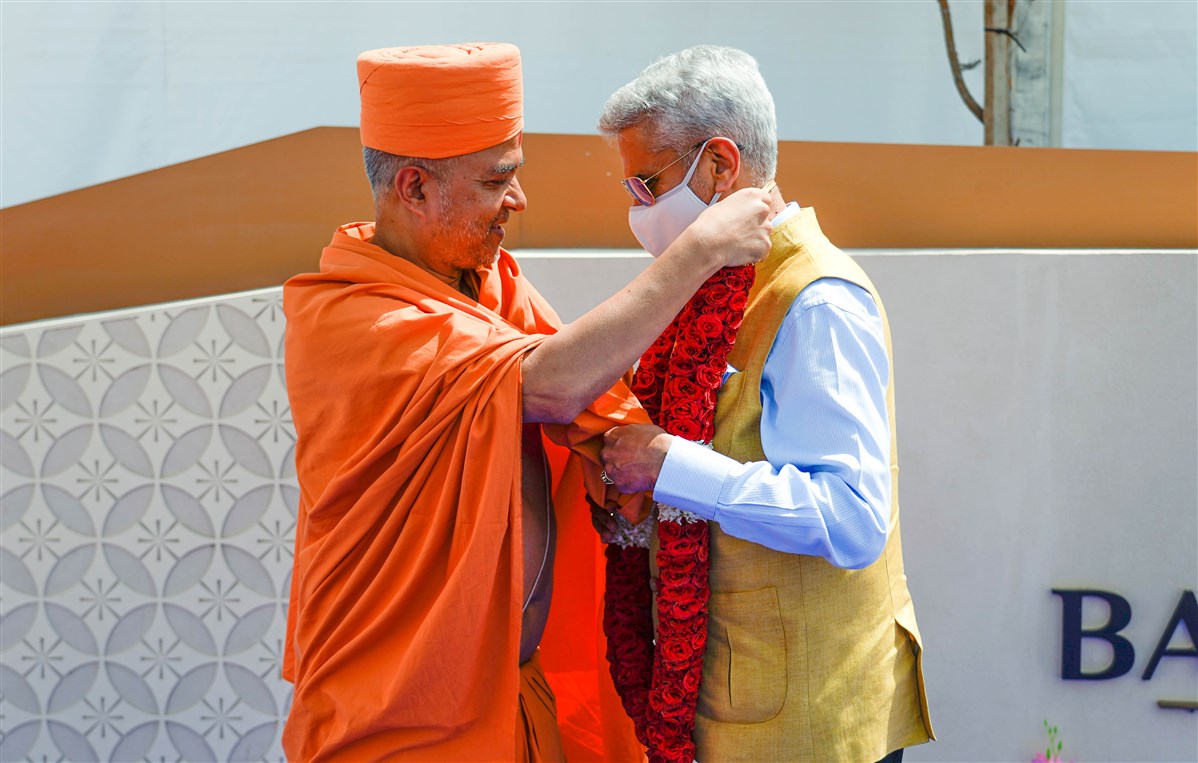 He was accompanied by an esteemed delegation of senior officials from the Ministry of External Affairs, including the Foreign Secretary Vinay Mohan Kwatra, Ambassador Sanjay Sudhir, Joint Secretary Shri Vipul and Consul General Dr. Aman Puri.

Dr Jaishankar made the visit a priority stop on his official visit to the UAE to chair the 14th India-UAE Joint Commission Meeting and the India-UAE Strategic Dialogue with UAE Foreign Minister Sheikh Abdullah bin Zayed Al Nahyan.

Unperturbed by the searing afternoon sun, the ministerial delegation made the mandir their first stop on their agenda; arriving at the under-construction complex at 2 pm.

Swami Brahmaviharidas welcomed Dr. Jaishankar and the delegation and led them to the Rivers of Harmony exhibition. The exhibition presents the origin of the mandir – which is a prayer for peace and harmony by His Holiness Pramukh Swami Maharaj, as well as the universal call for tolerance and unity shared by thinkers across time.

In recent years, under the visionary leadership of HRH Sheikh Mohamed bin Zayed Al Nahyan and Prime Minister Narendra Modi, India and the UAE have taken great strides towards the path of human fraternity – a key feature of which is the BAPS Hindu Mandir in Abu Dhabi.

It was a pleasant coincidence that Dr Jaishankar was able to appreciate the words of His Holiness Pramukh Swami Maharaj at the United Nations Millennium Peace Summit exactly 22 years to the day of the conclusion of that Summit in New York.

Dr Jaishankar appreciated the mandir’s harmonious design and diverse construction team. He also expressed his gratitude for the mandir and the BAPS Sanstha’s role in community service, especially the special services during Covid-19 and the Ukraine Crisis.

The video became an opportunity to reflect on this monumental moment in history and also to appreciate members of the present delegation who have played key roles in making that history.

Later, Dr Jaishankar and the delegation performed Ganesh puja and puja of the bricks to be placed on the mandir plinth that day. In this way, the delegation was joining more than 16,000 people who have already personally placed bricks to help in the construction of the mandir and ‘Give Harmony A Hand’.

Swami Brahmaviharidas then thanked Dr. Jaishankar and presented him a Golden Spire of Harmony memento for his support for this project, and also for the heights to which the minister has taken the reputation of India by his dedicated services.

Thereafter, Dr Jaishankar personally met and congratulated contributors who represented the thousands who were giving with their hearts to make this miracle in the desert.

Keenly interested in witnessing the making of the mandir, Dr. Jaishankar next took on the midday heat to visit the mandir site. Climbing five meters to the mandir’s plinth, the Minister first placed a brick on the mandir while the auspicious Vedic Shanti Paath was chanted.

Drawn by the uniformed craftsmen present on the mandir’s plinth, Dr. Jaishankar met the construction workers and craftsmen contributing their skills and labor towards this historic project.

He took a keen interest in their personal wellbeing and their experience working on the mandir. He enquired about how long they had been there and how much longer the mandir would take to complete. Encouraged by their spirit and joyfulness, he asked them to keep up the same spirit to complete the work in the projected time. “You are doing a great service for India, and also doing something great for the world.”

Dr Jaishankar also visited the newly installed Gajendra Pith and admired the intricate carvings as well as the diverse value tales envisioned for the mandir’s Mandovar façade. Returning from the mandir, Dr. Jaishankar once again thanked the craftsmen working on the mandir and the sadhus and leaders caring for them. He especially spent more time with the volunteers and artisans.

On his return from the mandir site, Dr Jaishankar sat with Swami Brahmaviharidas and privately discussed ideas regarding global harmony and progress. On hearing of the upcoming Centenary Celebrations of Pramukh Swami Maharaj, Dr Jaishankar graciously accepted an invitation to join the festivities.

Before departing, Dr Jaishankar remarked to a group of volunteers and contributors, “Our efforts should be to collectively bring everything we can to bring this mandir to culmination… Destiny will make this happen… it seems like a miracle that so many people are coming together to make this happen. I know that as people who live in this country its value is something you cannot even describe, but I want you to understand that it is something that the rest of the world is also watching.”

“I will regularly keep coming to see how it is progressing,” he added.