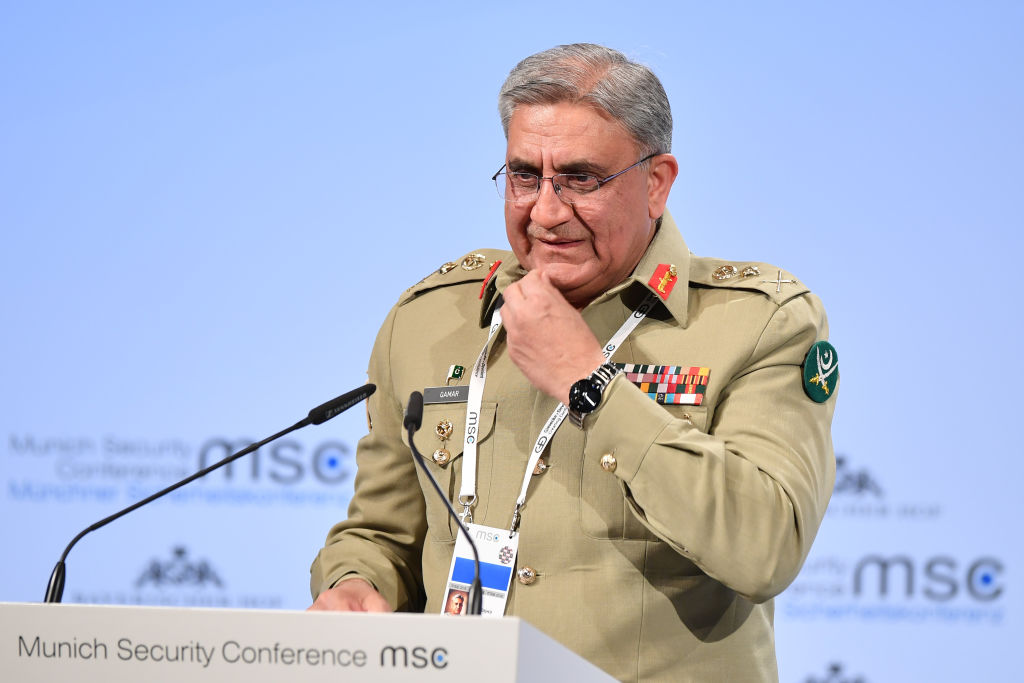 MUNICH, GERMANY – FEBRUARY 17: Pakistan’s Chief of Army Staff Qamar Javed Bajwa delivers a speech at the 2018 Munich Security Conference on February 17, 2018 in Munich, Germany. The annual conference, which brings together political and defense leaders from across the globe, is taking place under heightened tensions between the USA, together with its western allies, and Russia. (Photo by Sebastian Widmann/Getty Images)

Differences seem to have intensified in the Pakistan government over the appointment of the new Army chief with top brasses of the ruling coalition making contradictory statements on the key issue.

The appointment of a successor to Army chief General Qamar Javed Bajwa, 61, who is set to retire on November 29, is an administrative matter. Under the law, the incumbent prime minister is empowered to select any one of the top three-star generals. But politically it means installing someone who may pull the strings and even determine the fate of the person who appointed him.

Prime Minister Shehbaz Sharif on Friday initiated the keenly anticipated consultations with his government allies on the all-important appointment of a new Army chief, even as Defence Minister Khawaja Asif revealed that a name would be announced by Tuesday or Wednesday, the Dawn News reported on Saturday.

Interestingly, Interior Minister Rana Sanaullah said consultations had been completed and the new Army chief would be appointed in a day or two. He said any delay in the matter would not be “appropriate”.

In another significant development, Pakistan Peoples Party (PPP) leader Asif Ali Zardari said his party believed in the promotion system for the army and that the appointment of the military head should not be politicised, otherwise, it could harm the institution.

“All three-star generals are equal and capable [to hold the office],” the former president said, noting that the top army boss’s appointment would be made by the prime minister as per the Constitution.

A formal meeting between the two leaders is expected on Saturday or Sunday.

Defence minister Asif told Geo News on Friday that the paperwork on the appointment of the new Army chief would be started on Monday and the appointment made on Tuesday or Wednesday.

The induction ceremony of the new Army chief will take place on November 29.

According to rules, the army proposes a panel of names of the probables for the slot of the army chief and a summary is sent to the prime minister through the Defence Ministry to make the appointment.

Prime Minister Sharif recently paid a private visit to London where he consulted his brother and PML-N supreme leader Nawaz Sharif regarding the army chief’s appointment. Federal ministers had said that after returning to the country, the Prime Minister would take all the coalition partners into confidence on the decision made in London.

Defence Minister Asif said Nawaz had taken all the party decisions in the recent past by taking their allies on board.

Responding to a question if the army and the government were on the same page and who would be the next chief, Asif said the government could not ignore the significance of the army in the system. He said there were many military interventions in the 75-year history of the county.

The powerful Army, which has ruled Pakistan for more than half of its 75-plus years of existence, has hitherto wielded considerable power in matters of security and foreign policy.

Khan has also accused the military of having previously weakened independent institutions and, together with political dynasties like the Sharif family, having acted as if “they’re above the law”.

When Khan was in power, the Opposition accused him of trying to bring an Army chief of his choice who could support his alleged agenda of victimising opposition leaders.

Since he lost power in April this year, the equation has changed and now Khan is saying that the coalition government wants to install an Army head of its choice to protect looted wealth and steal general elections.